Dynamic stability of a tricycle

I'm currently designing the "electric bike of my dream" (please do not laugh! it's for fun, nothing serious), and I came up after some though with a tricycle, where 2 rear wheels are supporting the battery and cargo weight, and a suspended front part for the rider.

The simplified kinematic of the bike is the following: 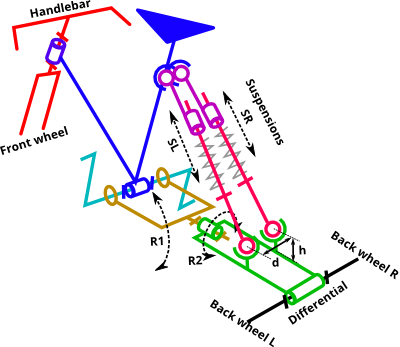 The link between the front part (in blue and red) and the rear part (in orange and green) would be made by two rotations: R1 for suspension, R2 to be able to move the front part sideways when making a turn. The rear part is supposed to stay vertical (well, more or less perpendicular to the road anyway).

My question is about the suspension part, and its influence on the "rideability" of the bike. I was thinking of putting two suspensions (SL and SR) to provide some positive "feedback" on R2 when making a turn, and to make the front part stay vertical when parked. On paper this looks nice, but I was thinking that this may be a problem when:

The feedback force and behavior would depend on the choice of d and h as seen on the diagram (h can be made negative if needed).

Another (probably simpler) solution is to only have one suspension in place of SL and SR, w/o any "feedback" couple.

What would be better in your opinion? Does a small feedback for R2 would render the bike not rideable?

As a bonus some "artist" views to get the whole picture (on the rear view you see only one suspension): 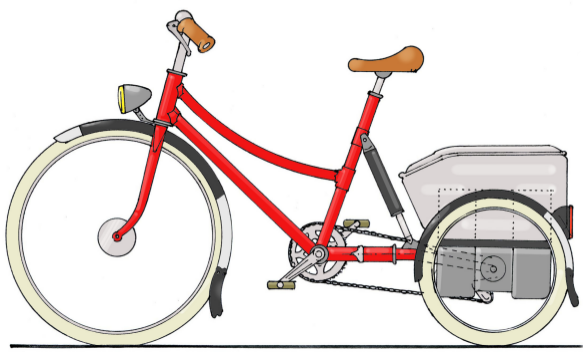 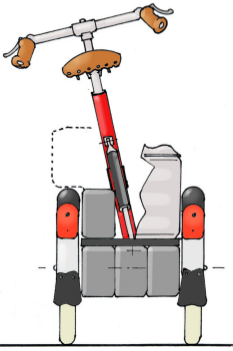 The bicycle is a deceptively simple machine. The physics behind bicycles is actually quite complex, with multiple forces interacting to produce self-stabilizing behaviour (i.e., ghost ride a regular bike then run along and strike it, the bike will deviate from its current trajectory and self right). For a good rundown of the main physics principles behind this behaviour, see this short "MinutePhysics" video.

The take home is there isn't a single optimal bicycle handling archetype, but rather there are multiple optimal solutions that are "better" at different use cases. To start to be able to answer which of your designs might be "better" we also need a clear use case and bicycle dynamics we wish to mimic.

To further confuse the matter the reason bicycles are a intuitive to ride as they are (after an initial training/learning phase) is that balance on a bike also co-ops neural pathways in our brain dedicated to walking (i.e., when we walk we step into the direction we are falling and in the same way we turn into a fall on a bike). Coming up with a functional design that is "intuitive" to the end user will be somewhat complicated, as we must also understand how people walk.

Taken together you may find an empirical approach (i.e., trial and error) may be the most effective. I would suggest creating a modular design that would allow you to easily switch between a single suspension beam without any "feedback" coupling, or a design with suspension beams. Ideally, you would also be able to dynamically adjust the level of feedback so you can vary it until it becomes more "natural."

In this case you may want to consider a lower trail front end as it is my understanding that having less caster makes it is easier to initiate a lean. Also a higher bottom bracket height may also assist in this department (think of balancing a broom on you hand, keeping the weight up high makes corrections easier). [NOTE: I am really outside my area of expertise in this last paragraph, if my understanding is wrong please feel free to add a correction in the comments.]

Not the answer you're looking for? Browse other questions tagged suspension riding-position design tricycle physics or ask your own question.