I have a touring bike which I use for commuting, I carry about 30 kg of tools with me usually on this pannier type thing I made on the back. And usually a work belt on the front which is 7 kg 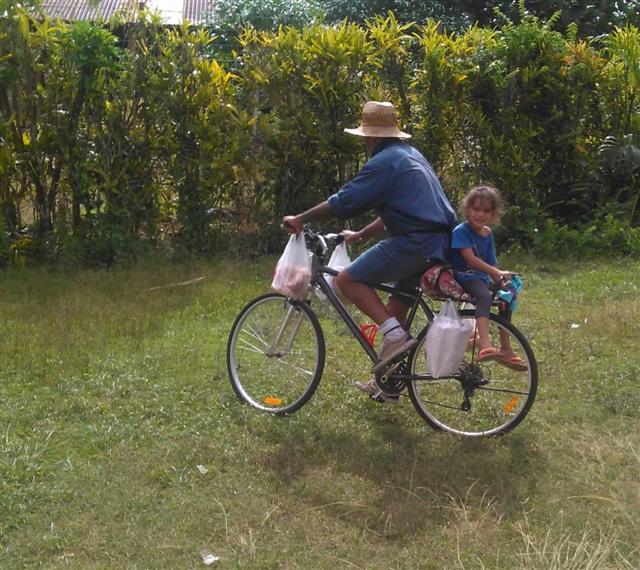 I'm wondering how much more I can safely carry on the bike without stressing it too much. The tyres seem to be under a lot of strain in particular. I'm 75 kg, unloaded with just me the bike tyres look fine, when loaded they're flattening out to an alarming amount.

I just ride on the road, but they're not good roads, I want to add about another 20 kg of tools and I'm wondering if I should put a fatter tyre on the back. I have 29 inch tyres on my mountain bike which look like they might fit. Or whether I'm worrying needlessly?

The flattening is normal, since there is so much weight. Don't really try the MTB wheels. They will probably not fit and you will have to be rolling with different sizes of tyres that may not fit to the frame. Increase the air pressure (or go tubeless) and make sure you change tyres in short periods of time. Don't let them wear totally off.

It's probably going to come down to testing, because fatter tyres generally have a lower maximum pressure. I suggest starting with a wider tyre, and it's likely that the 29" MTB tyres are also ISO 622 (700c), so they will fit the rims. If they fit in the frame then they're likely to work better as long as they're rated to a decent pressure.

The equation you care about here is weight/pressure = area, in this case weight on the wheel divided by pressure in the tyre = area of contact patch. The bigger the contact patch the more the tyre flexes as you pedal, so the more you have to work. But a wider tyre gives a wider contact patch, so you get less flexing for the same area. A wider tyre is also deeper, so when you hit a pothole there's more give before you pinch flat.

Particularly on bad roads, and with difficulty ordering cool new things from your "local" bike shop,the usual solution of high-quality, high-pressure tyres is not going to work too well. If you could, I would suggest such a tyre, but on potholes and gravel roads those give a rough ride (meaning you also want a high-quality hand-built wheel).

One other tweak is to suspend the load somewhat. If you put a partly inflated tube folded up under the tool bag in the pannier the tools will bounce on that, reducing the stress on the tyre and wheel when you hit bumps. It will also grind against the sides of the pannier, so I'd put the whole thing in a sack. If that works (I've never tried it, but it sounds plausible), it won't help with the load directly, just the punctures and broken wheels.

From memory of a long time ago, I used to carry 50kg or so on a fairly stock MTB when I weighed 70kg, on fairly rough roads. But I also used to go through a rear wheel every year or two.

The trick was to cut a floor from some medium customwood. I notched the corners to fit exactly within the four up-posts, and to rest on the four horizontal rails. The longer term plan was to add some small lips to help prevent things falling off.

Another advantage, you can leave the tools on the trailer and merely unhitch it for storage, or to free the bike for a quick trip.

If you do go this way, get one hitch for every bike you might use as a tractor, and one spare that you can fasten to a stake. I've hammered my hitch/stake into the ground and used it as a pitching point, along with some stout buckets under the rear corners for a stable triangle.

Depending on your need, a small workbench could even be fastened on top. for sawing or whatever. Could even attach a small bench vise.

Not the answer you're looking for? Browse other questions tagged tire weight or ask your own question.

4
Tyre Rubber Classifications
3
Does the rear tyre carry more weight than the front tyre?
7
When does a Marathon Plus tire (not) need replacing?
4
Best type of tire for bikepacking
3
optimal trail/monster-cross tyre width solution for 19mm rims on rigid bike
18
More speed or more distance for weight loss?
4
Road tyres vs "Street" tyres for charity ride on MTB Tandem
4
Rider weight limits regarding a bicycle purchase
2
Heavier or lighter?
13
I have slipped off my bike 3x in the last 2 months - will changing tyres help?