Can I use Shimano 105's brakes with vintage bike?

I have a Nishiki Custom Sport with Dia Compe brakes and I was wondering if I could use the Shimano 105 5800's on them.

I've heard conflicting comments on the compatibility with the SLR design and the pull ratio (they state you need "ST-5800, ST-6800 or ST-9000 STIs for correct leverage ratio").

I kind of understand it, kind of don't.

My biggest concern is safety so that's what I'm trying to gauge at (that and the recessed mounting).

For many years, all brake levers had a cable pull for either traditional sidepull/canti/u-brake brakes or linear pull/mechanical disc brakes. There were small differences between levers but essentially every lever across all bike genres in one camp would work with every brake in that camp. When Shimano came out with their under-tape shift housing routing STIs, they changed their brake lever pull to a higher number, putting it pretty much in between the two existing classes. These levers and brakes are designated Super SLR and they include most of the current Shimano brakes.

It's more cable pull. What that means is if you pair Super SLR levers with conventional sidepull brakes, you'll have more rapid arm movement and nice crisp brake feel but less leverage and less power. If you pair Super SLR brakes with conventional levers you'll have the opposite: more leverage but mushy feel and less arm movement, forcing you to have the starting position of the pads very close to the rim if you're going to avoid running out of lever travel.

I don't really recommend doing either. The danger of the former is inadequate braking power, and of the latter it's that it can be easy to run out of lever travel, which is also a safety issue, plus the lever feel is poor.

A couple years back I put a pair of 105 5800's on a 1986 Centurion Elite RS that had Diacompe brake levers. It worked great. I never even considered that the pull ratio would be an issue perhaps I should have? I have heard of pull ratio being an issue when trying to use cantilever brakes, linear pull (v-braves), or disk brakes with vintage road brake levers, but in my case... my 5800s worked with my 1986 diacompe levers just fine.

maybe.. but probably not. Older bikes usually require the calipers to have more reach. 105 or similar have up to 49mm of reach whereas with an older bike you may need up to 57 mm . Shimano make them as do Dia Compe. A good bikeshop should be able to get them otherwise buy online easy enough. 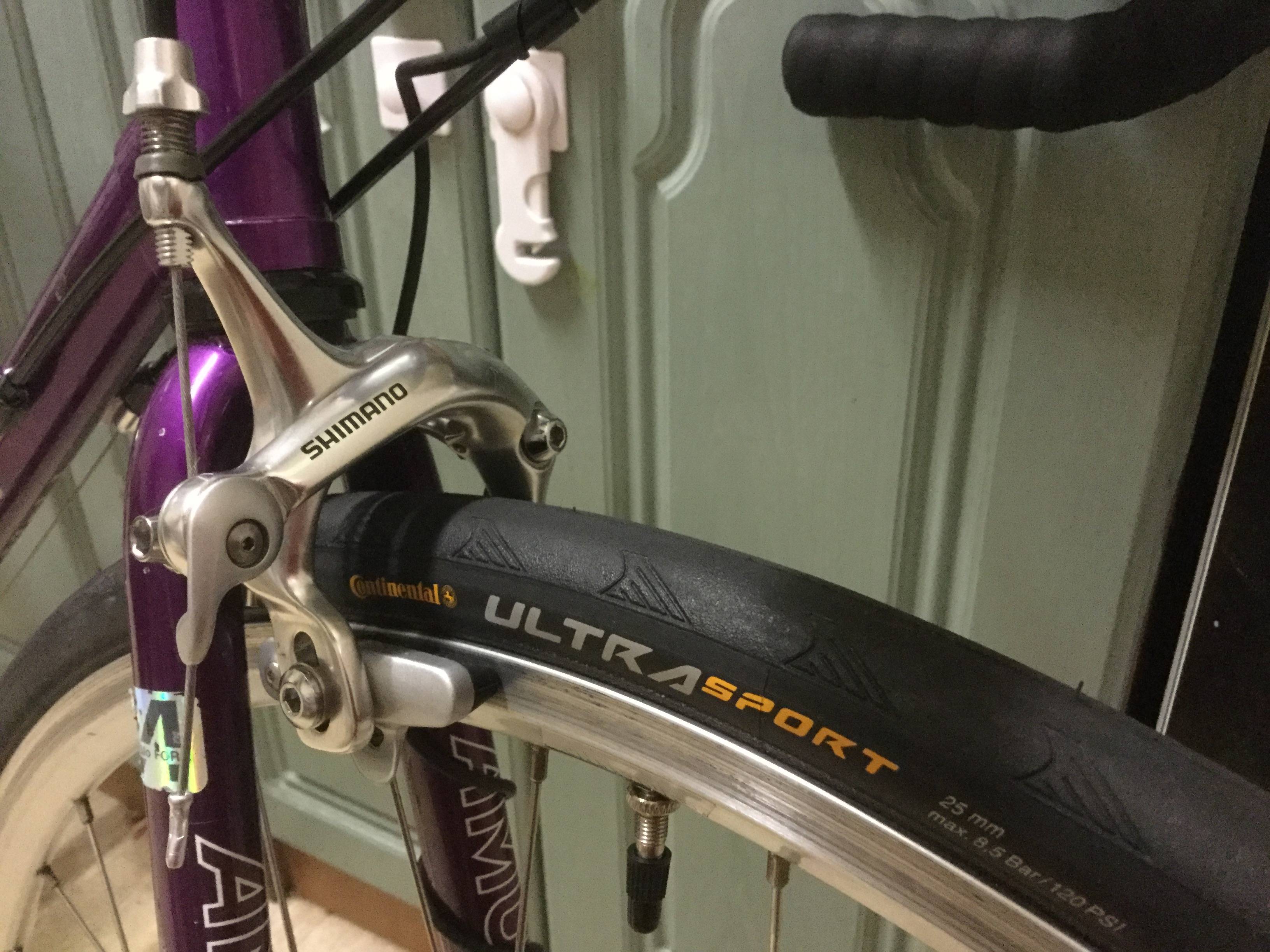 Here is a picture of an older bike I rebuilt with new Shimano calipers. Tiagra or 105 would not work as the drop reach was not sufficient. The pads would graze the tyres even in their lowest position. These ones with 57 mm reach are fine and work well with an older set of Shimano 8 speed STI levers..

Not the answer you're looking for? Browse other questions tagged brakes shimano safety compatibility vintage or ask your own question.