Does a crank arm Power Meter measure power in both directions?

The leg on the upstroke weighs down on the pedal and creates additional work for the leg on the downstroke. A crank/hub power meter ignores that and gives you the effective power combined by both legs.

Lets assume a rider generates 120W on the downstroke and -20W on the backstroke. Total power would be 100W.

Now can the crank arm measure the negative power on the backstroke and substract it?

(If, as I've learned, it can not differenciate between positive and negative power a crank arm power meter would show 140W. If it can only measure one side you get 120W)

Examples of such power meters include devices taking strain measurements at the crank spider, the chainring, the chain, the cog(s), the hub, or even at the rear tyre when the bicycle is on a power measurement ergometer. SRM, Power2Max, Quarq, Powertap hubs and C1 chainrings all fall into this category of power meter. Ergometers such as the Wattbike also fall into this category as they measure strain at an internal component driven by the chain.

To provide the extra data from each crank arm (or pedal) it requires appropriate software and a bicycle computer head unit with the capability to record and provide this additional data.

For the most part, such meters don't readily provide this extra data, but rather provide down-sampled subsets, such as a left/right power balance. This is because the common communication standards in use for many bicycle handlebar computers (i.e. ANT+) as yet don't have this capability. So in order to provide such data it generally requires proprietary data capture hardware and software.

The question still remains as to the utility of this extra data and whether it provides any actionable intelligence.

In terms of the propelling the bicycle forward, all that matters are the net forces and the velocity at which those net forces are applied and so whether a power meter is measuring up or downstream of the bottom bracket matters little.

Where examining the independent crank (or pedal) data may be of some use is in analysing pedalling "techniques". This is not new in terms of the science of bicycling biomechanics, there have been such devices used in labs for many decades with research dating back to the late 1960s (e.g. Hoes et al). Independent crank force measurements were first reported in the literature in the 1890s! Since paper(s) by Hoes et al then there has been research into crank forces by Coyle et al, Korff, Edwards, J. Martin and no doubt many others.

One interesting aspect of the research is that while there is much made of "pedalling technique", the reality is that how we end up pedalling naturally is pretty darn hard to beat. Another is that just because there may be some negative torque on the upswinging crank arm, that does not mean it is a bad thing. Indeed if you look at data by Coyle and Korff, it's pretty normal for many elite professional level road riders.

Here is an image extracted from the Coyle et al study which does indeed show riders often apply some negative torque at some points around the pedal stroke: 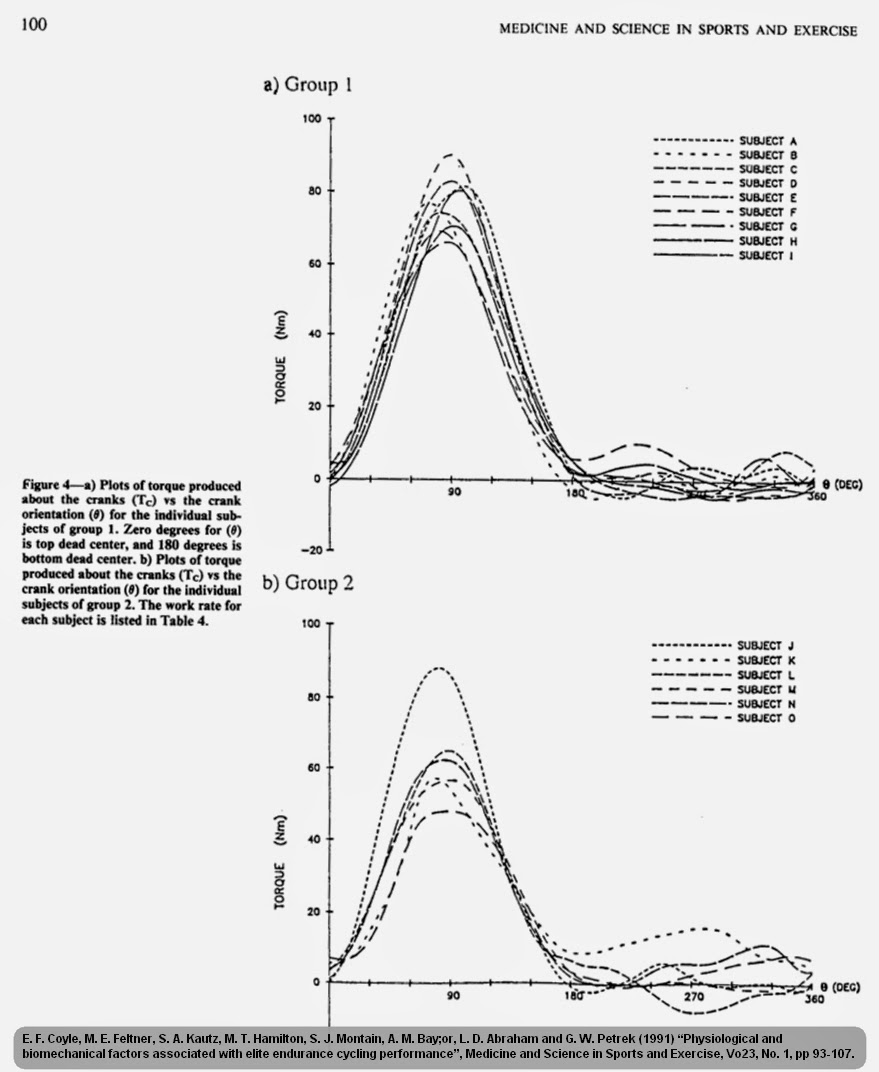