Is this wheel built incorrectly?

I am swapping around some hubs, and this means rebuilding two wheels, a 20" and a 26", both 36 spoke and both were done standard cross-3 lacing.

Here's how the 26" wheel hub looks after assembly. 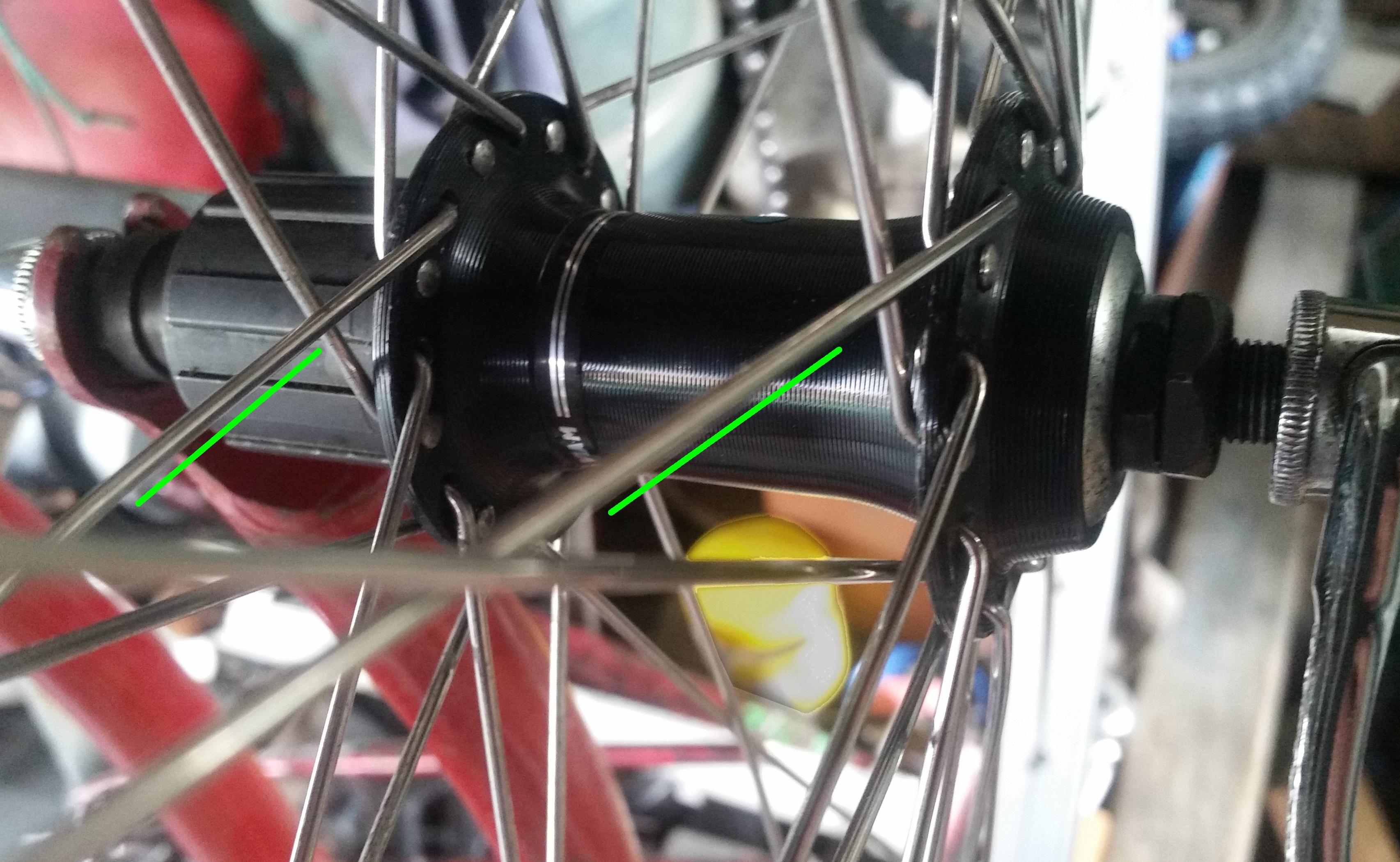 Notice the two marked spokes? They're both trailing spokes in this case, each go through the holes opposite ways. That is, one is inside to outside, and the other is outside to inside.

Is this right or wrong? And if its wrong, how wrong is it ?

Update - this wheel has been working perfectly for the last four years, and has done a number of MTB endurance rides without issue.

It's a little bit wrong in that it has zero upside and one potential downside, but that downside is unlikely to ever be relevant.

Trailing spokes straighten a little temporarily under drive load, and this causes the spokes to essentially be pushing on each other a little at the cross. On a wheel laced like this (there's no agreed upon term for it but let's call it "asymmetric"), the idea exists that the forces from the spokes pushing on each other in this way add together and can cause the rim to get pulled over to one side slightly in use, whereas with mirror-image lacing the forces would cancel each other out, or come closer to it.

This is probably a real thing that happens, but it doesn't really make any difference I've ever seen, and we're talking about a very small amount of movement in the rim. If there were consequences, it would probably be on a bike with tight tire clearance. Some wheel manufacturers make all their wheels this way, because it can save steps and/or simplify their procedures.

The more potentially consequential side to rebuilding a wheel this way is that double-grooving the flanges increases the risk of flange failure and increases the amount of work you have to do to get the spokes bedded into the flanges. So barring situations where you're forced to use a different lacing pattern on the same hub, or where you're switching to a rim of different "handedness" than the old one (only really something you'll see if vintage parts are involved AFAIK), there is zero reason to not re-use the existing grooves. (Note that this is not to say that flange failure is at all likely from double-grooving a tangentially laced wheel, just that the odds of it happening go up.) If the wheel was built asymmetrically originally, it should usually be re-laced this way.

This lacing pattern is actually explicitly recommended by Shimano and Magura for rear disc hubs.

Nonetheless, according to Roger Musson, old-fashioned disc brake designs used to have very tight clearances between the caliper and the NDS spokes, so you would want the leading NDS spokes to be on the outside at the final cross to avoid contact with the caliper under braking. This is irrelevant to your wheel because it doesn't have disc brakes.

Conversely, there's an argument that the DS spokes should be laced the opposite way around to avoid contact with the mech cage under drive load when on the biggest sprocket. This seems even more tenuous to me, given how small drive forces are in comparison with braking forces. Either way, it's consistent with what's observed on your wheel.

I'm not sure how much merit any of these arguments have – would be nice to know if someone's measured it. But in any case, asymmetric lacing patterns have some favour among the big names in the industry, at least for disc brake set-ups.

3
Why forward-facing spokes should be "heads in", except on the drive side of the rear wheel?
2
3 cross pattern what's the right way?
1
Can I swap freehub bodies?

22
Is it really necessary to physically cross (interlace) the spokes on traditional wheel lacing?
4
Can I lace my hub with all inward or outward facing spoke heads?
4
lacing Alfine wheel, trailing spokes inside or outside hub flange
3
Why is it important to keep equal number of turns when building a wheel?
1
How much will 4mm dish weaken the rear wheel?
2
Wheel Building - Should key spoke be inside or outside flange?
3
Why would non-drive side leading spokes break?
0
Diagnosing and correcting hop on carbon wheel
1
Trying to understand the impact of different tensions between inner and outer spokes