Can using a trainer damage my bicycle?

I know that using my road bike with a fluid trainer will wear out the back tire more quickly than regular road riding, but does it have the potential to actually damage my bike (frame, gearing)? While not a super expensive machine, I do like it quite a bit and it is my only bike.

While on the trainer, I notice (1) every little noise from the drivetrain and (2) some flexing of the (aluminum) frame as I pedal. It's quite possible that these things happen on the road, but it's too loud to hear them.

Should I think about getting a trainer-only bike?

The only significant frame damage I can think of from this is your skewers -- the little nubs that grab on to the skewer and hold your bike inside the trainer have a tendency to scratch the hell out of the skewers.

As far as flexing goes, all frames flex. The only time I would be worried about it would be if there was a grinding noise coming out of the crank -- but that wouldn't be caused by your trainer, that would just be impending crank failure.

It is possible but quite uncommon. The trainer holds the bike upright while you throw your weight around, and the frame is not really designed for that. Bike fames are very strong with regard to vertical forces but nowhere near as strong for sideways forces. Twisting the bike between the rear axle and the handlebars is kind of ok (because it's designed to take a twist between the handlebars and bottom bracket) but it's something to minimise. You're more likely to see a fatigue failure than a simple overload.

If you are moving your upper body as you pedal you should try to learn not to do that. Wind trainers are all about sitting still and pedalling, not about practicing sprints. You should avoid getting out of the saddle, and try to minimise upper body movement. Or you may need to go with rollers rather than a trainer.

You definitely shouldn't bolt the trainer down - having it free to move almost guarantees you won't break your frame. The break I've seen was from one bolted to a concrete floor and the rider was out of the saddle when it broke.

As Billy said, your rear skewer will suffer cosmetic damage. Trainers often come with a cheap steel skewer for this reason.

I have a 2011 Specialized Roubaix and I too have been concerned as to whether or not trainers are hard on carbon fiber frames. I sent an email to Specialized customer support inquiring of such. Their comments were:

Trainers are hard on bike frames. However riding a Specialized frame on a trainer will not void the warranty.

In fact I've never personally heard of or seen any Specialized bike frame ruined or damaged from use on a stationary trainer. Just make sure to keep your receipt or proof of purchase and if by some chance you have an issue you can have it taken care of under warranty. I don't know about other manufactors but Specialized says it's not a problem and are willing to stand behind their products.

There is no risk to your bicycle from a properly fit and used trainer. Use the skewer which usually comes with the trainer, make sure your mount point is adjusted properly. The flex in the frame happens when you ride, too. You just don't notice it because you are paying attention to where you are going, rather than focusing on minutiae. (As is proper.)

Consider getting a trainer which has some VR functions built in. You'll find you focus more on riding, and less on the mechanical aspects of setting up the bike. www.tacx.com

Just like anything: consistent and repeated hard usage of a mechanical object will shorten its lifespan. How much? That depends.

So the best, short answer to Kevin's, the original poster's, question is a definite "Yes."

The long answer is more complicated.

Bicycle frames were and are never designed for, their technical specifications do not include, nor is any testing done to determine their suitability for or capacity to withstand repeated usage on a stationary trainer. Period.

Testing for use in a stationary trainer would not be difficult for major frame manufacturers, but it would change the design specifications and make bike frames harder to manufacture and even more expensive, and most bikes are ridden outside. So they don't do it.

I have personally seen metal frames fatigue prematurely, and all types of frames of different material types fail (i.e. break) from excessive use on a trainer. I've worked for a major manufacturer, a regional distributor and several different retail shops, so I've seen a lot of wrecked frames for a variety of reasons.

The lawn dart catcher is right on about rollers but there is no set of rollers made that is capable of providing the level of sustained high resistance to allow the development of high power required by most competitive cyclists. They are used by professionals for base building (endurance) workouts and to develop superior bike handling skills.

Damage resulting from sweat can and will occur if not wiped off, so that was also a useful response.

Other posters who talk about skewer damage are not answering Kevin's question. The skewer is not part of the frame.

Finally, the extent of frame damage will depend upon the rider's size and strength and their actual pedaling efficiency. Remaining seated as Moz recommends is really not a factor because it depends upon riding style. Many testing facilities have observed that talented and/or experienced riders who climb well produce lower lateral stress on the frame when out of the saddle. These riders inherently know or have learned how to apply torque where it really matters: on the pedals.

Elaborating on a comment I made earlier: we perspire, and some of that perspiration will hit your bike or your handlebars. As stated elsewhere, you want to wipe your bike off, and you should consider some sort of covering for the top tube. Admittedly, this is not the trainer itself damaging your bicycle. However, outdoors, you're moving through air, which dissipates a lot of heat. I'm not sure this has been scientifically studied, but received wisdom appears to be that indoor cooling is almost always less effective than the cooling you get from riding outdoors, unless you invest in many powerful fans. Thus, dripping perspiration is an inevitable consequence of indoor training.

If you are using a steel frame, it should be obvious that this is bad.

If you have a carbon frame, you will have aluminum fittings for things like the bottle cage bosses. Perspiration can facilitate galvanic corrosion over time. The image below is reproduced from a Facebook post by Raoul Luescher, an Australia-based carbon repair expert. He described the white powdery stuff as the aluminum basically disintegrating due to corrosion. 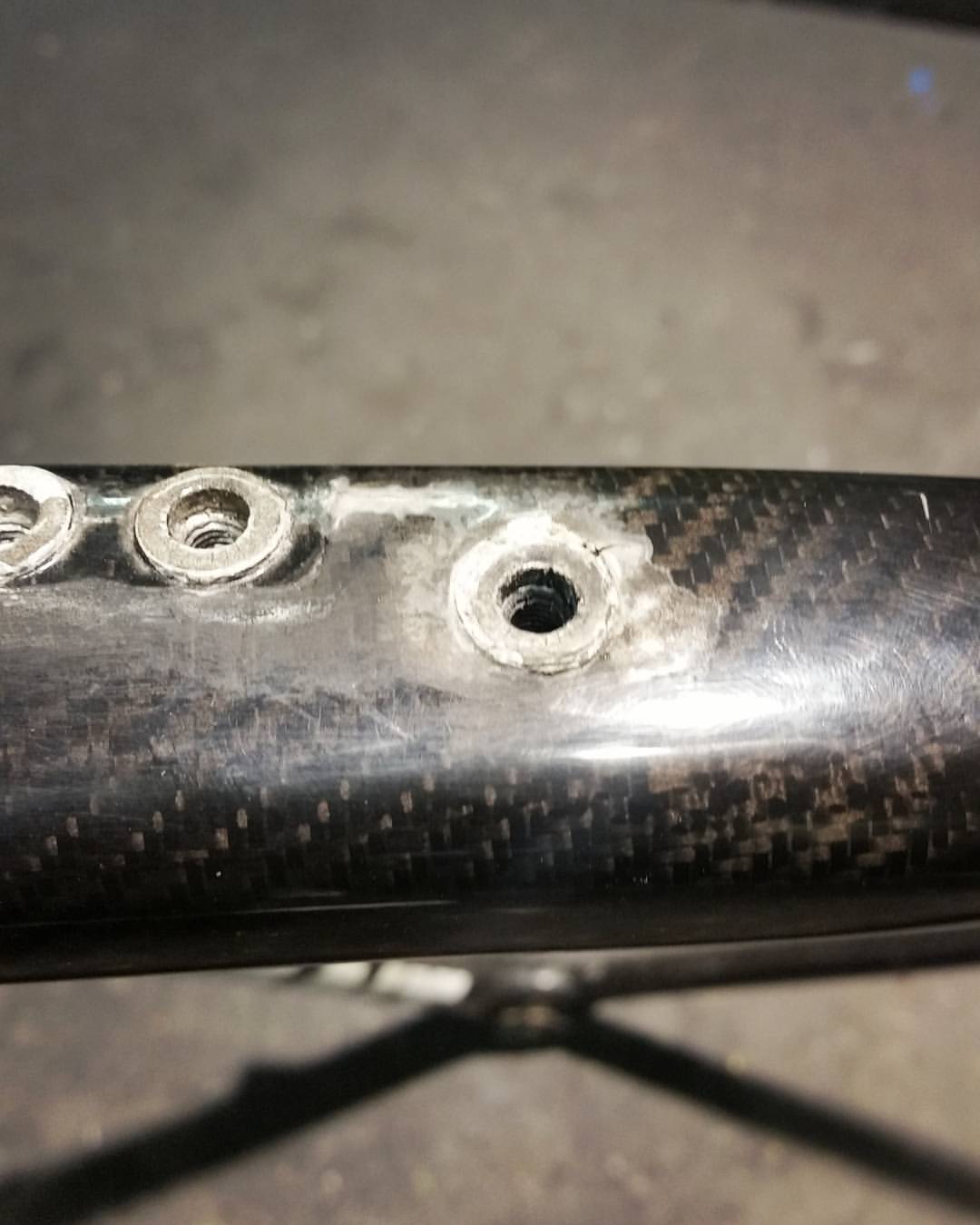 It may also be possible for aluminum frames or components to corrode from sweat in some circumstances. This Roadbikereview forum post contains three pictures, two of which are reproduced below. The rider said that they had gone through two of this model of handlebar in three years. 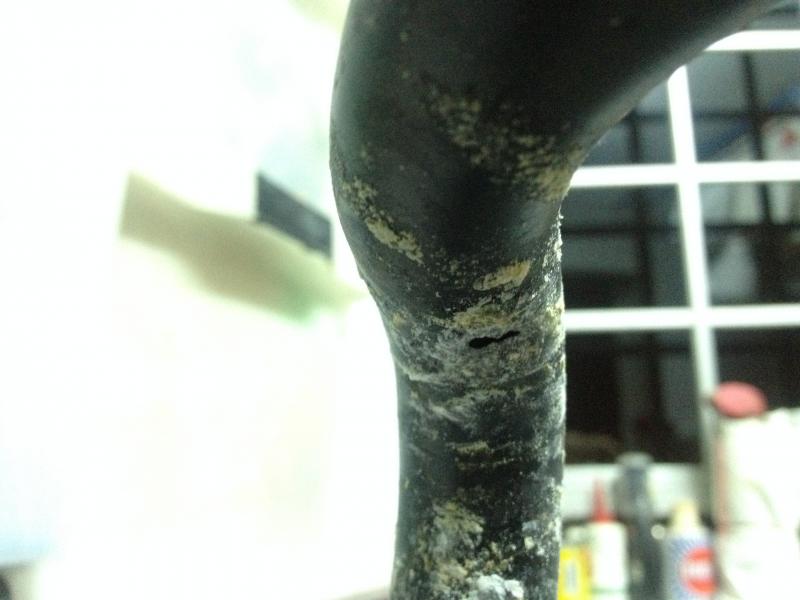 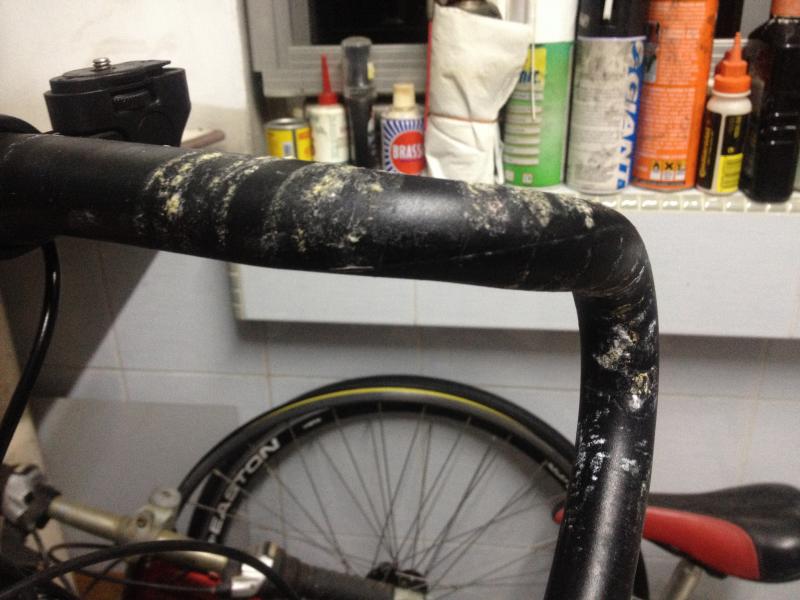 This article by Wiley Metal says that while raw aluminum normally has a protective oxide layer forming immediately, sodium chloride or other chloride salts can attack that oxide layer. To protect against that, we normally paint or anodize aluminum components, and all aluminum handlebars are indeed anodized. This increases the depth of the oxide layer and I believe it also makes it porous enough to accept dyes. Most handlebars are dyed black, and I think they're also covered with a clear coat. However, when mounting your shifters on your bars, you may introduce surface scratches that expose the oxide layer. The poster above may not be typical, e.g. they might perspire a lot more and a lot saltier* than average. However, for this reason, it's worth changing your bar tape every so often, just so you can check the status of the handlebars, and perhaps clean off accumulated salt deposits if there are any.

*While not directly related to the original question, you do need to replenish electrolytes during endurance activity. Individuals do vary in how salty their perspiration is. If you notice yourself craving salty foods after or during a ride, you should strongly consider getting some electrolyte supplements if you don't already use them. They needn't be used on every ride, but the benefit can be substantial on longer rides, especially in the heat. If you figure that your sweat is saltier than your peers, it might also be worth checking up on your handlebars even if you don't do indoor cycling.

One way that you really can damage your bike is through your sweat. You drip a lot of sweat on a stationary bike, and if you don't clean up the bike pretty thoroughly after each session, you can corrode the frame (if it's steel) and some parts. There are sweatguards for bikes for exactly this purpose, and they work OK.

I did have a single-speed beater that was my dedicated stationary bike for a while.

Trainers when used correctly are great, but they do in fact add wear and tear to your bicycle and its components. It is specifically adding kilometres/miles to your drivetrain and to your back wheel. Regular maintenance (cleaning, greasing, general lubrication) will aid in keeping your bike in great condition, but expect that with lots of use, you may need to replace certain components sooner than if you didn't use a trainer at all.

So this was long ago answered, and it's been a while since anyone commented. Interesting though - from a physics standpoint looking at the forces at play on a bike frame in a stationary turbo trainer...

There really isn't much difference from riding on the road. Perhaps there is more twisting/bending on the trainer than on the road, so the questions may be how much more. But bike frames have to be built to withstand lateral / bending forces at the dropouts or you could never take a sharp corner at an angle.... there would be no racing!

Yes, it is possible, see this video:

Though not, technically, a part of the frame the headset will most likely be pitted and its life reduced due to the lack of steering when used as a trainer. I bought a cheap bicycle from bikesdirect and, after setting it up to align with my regular road bikes, don't care about the headset damage, which did occur, as I only use it on the trainer.

Not the answer you're looking for? Browse other questions tagged trainer or ask your own question.

4
Can the trainer damage my bike's skewer?
4
Is it safe to leave my carbon bike in my stationary trainer for extended periods of time?

4
Vibration in fluid trainer - OK?
15
Will cycling off-the-trainer with the trainer's steel skewer damage my bike?
11
What kind of tire should I purchase for use on a bike trainer?
5
Daily Adjusted Seatpost for Trainer Bike
5
Using trainer as dynamo
1
Using wrong speed/size cassette on trainer
4
Can I put a 8 speed bike on a Elite Suito 11 speed direct drive turbo trainer
4
Trainer tire selection (hybrid bike)
1
Able to shift to final gear on bike, but not on smart trainer
4
Can the trainer damage my bike's skewer?