I am a design student and avid cyclist and am currently working on a design project for school. I had an idea for locking handlebar grips that have LED lights built into them. If you can picture MTB grips or even BMX grips for that matter, essentially there would be an extra 2 maybe 3 or so inches towards the inside of the grip where the inner "ring" on a BMX grip would be (side of the grip closest to the stem). This would give enough extra space to house a few LED's and batteries as well and would be operated by the thumbs of the rider. The intent of this grip is to not only provide safety and visibility for the rider (as you would have 2 "headlights") but to also deter theft as grips are a complete pain in the ass to take off.

Anyway, my question for all of you is do you see any value in this concept? I know there are other options out there for theft proof lights but I feel like a seamless integration would make it less of a "target" if even at all. Honestly if any of you have suggestions or things you think would enhance this idea any feedback would be much appreciated. Thanks for your time. And remember this project is conceptual...there are no wrong answers. 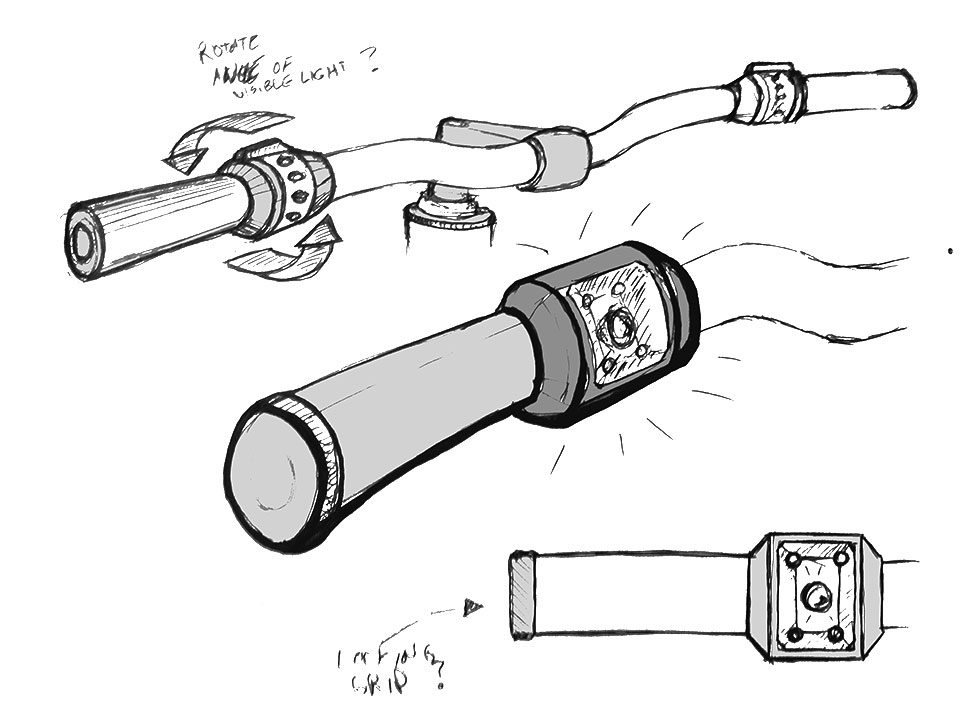 You would be entering in a very busy market with no obvious advantages. Let's look at the two types of LEDs that you might use:

I don't see sufficient depth/space in the design for sufficient optics. Again, not a problem for 5050s since they are so weak and diffuse. But for high-power Cree-types, you need beam forming reflectors and optics. The consumer won't be able to aim the light laterally with Crees (unless you have movable optics inside). The angle at which handlebars are bent viz a viz the stem is variable -- from straight-straight to a small bend to a severe bend. Not a problem for 5050s with diffuse lighting, but people at the higher price points of a Cree want a sharply focused light that goes in front of them.

Second, assuming you use Crees and 18650s, how are you going to charge them? For removable lights, you can just take them off and bring them in the house to charge. Many bikes are stored in sheds without power. Having to string a charger and micro-USB cable all the way to handlebars is going to be undoable for many.

Finally, regardless of Crees or 5050s, the positional relationship of the lights to the brake/shift levers is unclear and installation may be difficult. BMX trick bikes might not have brakes but most consumers will want lights on a street-legal bicycle. If your lights are in the grips, they'll be obscured by the brakes -- and your design is incompatible with grip shifters. If your lights are located further inward, inside of the brakes/shifters, then the consumer has to take the grips, brakes, and shifters off to install -- and you'd have to find a way to get your power (if using Crees) from the battery inside the bar to the lights. Installation would involve drilling the bar or tucking the wiring under the grip and past the brake/shifters. Not something that your average parent could do, so you'd have to add the cost of shop labor.

Additional back of napkin calculations for those who wanted to know if it's possible with 18650s:

Mountain bikes have a handlebar diameter of 22mm. 18650s have a nominal diameter of 18mm (i.e., 18-650) but are often closer to 19mm actual because of the insulation and power protection circuitry). It's a tight squeeze. It won't work with many drops.

14500 lithiums would fit for sure as they're the same dimension as AAs (14mm D x 50mm L). However, they only have 900 mAh (fake ones will advertise more but are fake) which is 3.2 watt-hours or about 3 watt-hours after booster. So just about one hour of full (250%) power with one 14500, but you can serially gang the 14500 into two or three, depending on the curve of your handlebar (which would limit which bars it could fit into).

Almost all lights nowadays are USB rechargeable and as such need to be easily fitted and removed. As such they come with rubber straps for ease and convenience. The ease of removal is better theft prevention than making them hard to remove.

Lights do exist that cannot be removed and these are usually built into the bike frame. For practical reasons these are best powered by a dynamo hub and not batteries; you can't recharge something that you can't take off the bike. Examples are Boris Bikes and Vanmoof.

In summary your design doesn't really solve any problems or add anything new, in fact retrofitting an existing bike with a non-removable light will probably cause convenience problems.

I found this topic by searching for this as a product to buy. It could certainly work as a design - I think with the addition of red rear facing LED and a relatively large rechargeable battery located within the handle bar. This way they could last a month of normal use and either be removed (allen bolts) or charged in situ (with a USB power pack if required). The ends of the grips would need to be tough and rubberised to protect the leds from knocks.
This would be great for safety and convenience. Probably still used with a more powerful central light. I'd love to buy a pair!

18
How do I put grips on mountain bike handlebars?
3
What is the diameter of Lizard Skins Logo and NorthShore grips?
2
Bicycle lights- Indicating in the dark
2
Brake lever grips
20
Protecting bike attachments such as lights against theft
2
LASER bicycle lights
1
Running multiple dynamo lights on a single dynohub
1
Rubber sleeve for bike grips