How to increase tension of rear derailleur cable

I have a Trek Shift 3 (I bought/got new/unused in May 2016) with a Shimano ST-EF65 Shifting Lever (Index) and I am unable to shift gears in the rear derailleur. I think the reason I can't shift gears is because there is not enough tension in the cable. Between the rear derailleur cable housing and the internally routed cable housing, there is > 5 mm of play in the cable, even when the index is set to the lowest/easiest gear (1) 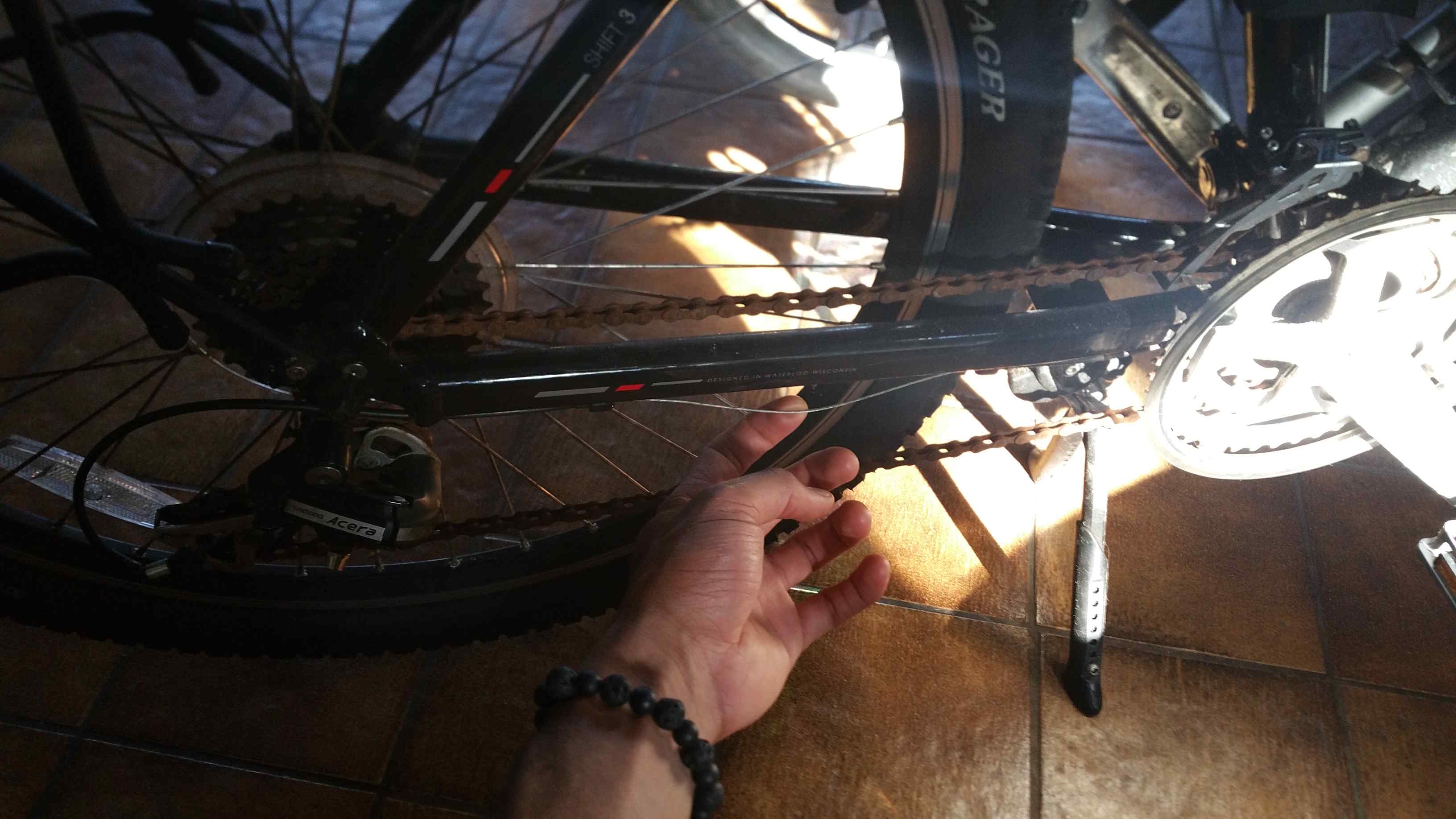 I've followed several tutorials on how to adjust rear derailleurs and increase the tension of the rear derailleur cable, which include setting the high and low limit screws and adjusting the Barrel Adjuster, with no success.

I think the cable is too long, because after following the directions in the tutorials, there is still play in the cable.

You started with too much slack for the barrel adjuster(s) to take up. Note you have one on your derailer and one on your shifter, and they both do exactly the same thing, so maybe by using both you'll have enough adjustability, or maybe not. It doesn't matter because you don't really want to be maxing them out anyway. You need to re-anchor the cable in a more reasonable spot, and ideally check a few other things along the way.

Shift the shifter into the highest position. (Slackest cable tension, biggest number, the one you get to by pressing the pointer finger lever a bunch of times.) Loosen the RD cable anchor. Pedal the bike so that the chain is on the smallest cog. Take the opportunity with all the cable tension off to visually check that your high limit screw is set correctly. Looking behind the bike, the center plane of the RD pulleys should be that of the right/outer plane of the smallest cog, or in other words very close to but just a little to the right of the center plane as the smallest cog teeth. (counter-intuitive but true, as per Shimano.) Screw both barrel adjusters all the way in, then screw one out one full turn so you have some adjustability in both directions if needed. Using any pliers, grab the end of the cable and pull it taut while tightening the anchor bolt back down. You don't need to pull it hard. You want it to be clamped at the spot that makes it just taut. Unless there are other problems with cable friction, busted housings, hanger alignment, damage to the derailer, etc, the bike should now be approximately shifting, although the shifting will need final adjustment to perform correctly.

But before you do that, since you had problems with excessive slack that started all this, you should do one more step that will reduce and/or eliminate further such issues with "stretch." (Whether or not the cable is physically stretching at all is a contested issue, but it doesn't matter, and either way it's not the main thing causing the slack.) Keeping the shifter in the same highest/slackest position, hang the bike by the seat off a stand or tree or something, and pedal the cranks with one hand while pulling gently on an exposed part of the cable with the other. Once you're in the lowest/largest cog, stop pedaling, stop the rear wheel from spinning and pull hard on the cable. Let go, pedal again to get the chain back down to the high gear, and see if you've created slack in the cable. If so, that's a good thing, because it would have happened eventually anyway. If there is slack then take it out by repeating the above re-anchoring procedure.

At this point, dial in the shifting with the barrel adjusters so that it shifts smoothly with minimal hesitation in both directions, and you should be set.

Mainly if your cable is too loose, you should tighten it with the screw at the derailleur bottom.
From your comment about shifting gears, i guess that it's the time to you to replace the cable (thou on the pic it looks pretty nice). The cable can stick (not shift down) because of two reasons: 1) it's dirty (or rusty on cheap cables), 2) it's bent. In the first case you can try to clean it with wd40 (to do it you have to remove the cable housing from the bosses, and spray the wd40 into the housing). In the second case you should get all the housings off, and examine the cable for bents that inside the housings, and that's almost equivalent to replace the cable (but with no cost, and potentially it will not work).

I believe that you should increase tension of the rear derailleur cable by untightening the nut on the derailleur and pulling the cable with fair power while locking it back. You should only do that when the chain is in the smallest cog on the cassette and the bolt for the cable is all screwed in. After that if needed adjust the high and low bolts and the third bolt that is for the distance of the derailleur to the cassette. This distance should be around 6mm. Also unscrew the bolt of the cable if gear shifting is of poor quality.

Not the answer you're looking for? Browse other questions tagged derailleur-rear cable tension or ask your own question.

7
How to install the cable for this rear derailleur?
3
Why do my rear caliper cable becomes loose after some squeezes in the brake lever?
4
Alfine shifter cable tension increases over time
6
Prevent internally-routed cable housing from vibrating against frame
3
Are rear derailleur cable intervals equal?
3
Sram Eagle NX Rear Derailleur not reacting to cable tension
0
Determining if there is too much chain tension on 1x setup with XT clutch derailleur
0
Rear Derailleur wire sags completely in higher gears