Practical way to park many bicycles in one garage for everyday use?

I have seven bicycles, four of my personal use, and three for each one of my wife, stepson and nephew, all of them adult-sized.

My lifestyle involves one or two short daily commutes and a lot of daily errands with one of three bikes (cargo with rack and fenders, wide-tire full suspension, and skinny tire fixie, depending on mood). Eventually my stepson wants to ride and takes his bike out, but this is like once a week. And my nephew takes her bike once a month or less. My wife usually goes out with me on the weekends, so we take her bake and one of mines out).

In my former home, I stored all of them "stacked" beside one another inside the house, so when I had to take one of them, usually I should move all the bikes in front of it, take the desired one out, then put others back, usually ending up with often-used bikes behind less used bikes. That made the youngsters sometimes give up on a short leisure ride out of sheer (justifiable) lazyness to take their bike from behind the "stack"

Recently, I moved to an apartment that has a garage, measuring like 3 meters wide by five meters deep, and about 3,5 meters tall, so now I am free to use it to organize the bikes, plus some cabinets with tools, hooks for the helmets, a tool hanger in a wall, etc.

So the question is - do any of you suggest a way to organize the parking of these bikes in a way that:

Here is a poor photo of the actual garage with the bikes already in it, but surrounded by a lot of junk, some of which will be taken out, some of which will be rearranged in cabinets, drawers, etc. (for size reference, the old doors in the back are leaning against the wall). Notice the stacked configuration on the right, where one of the bikes leans against the wall, and the others lean against it successively. I would like to avoid or at least streamline that. 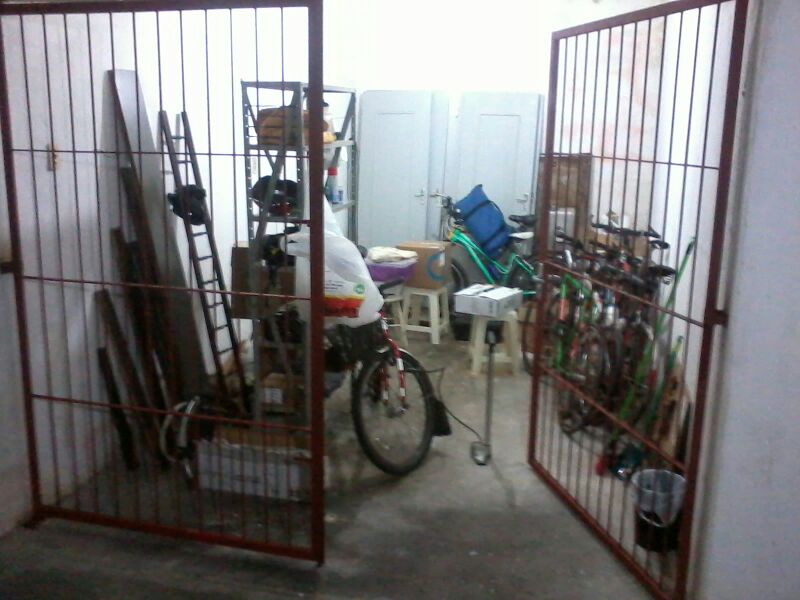 You don't say what other uses you have for the garage, but lets presume the floor space is a premium, otherwise a row of bikes racks is the obvious, cheap and best solution. 7 bikes will fit into 5 meters, and stick out about 2 leaving plenty of space .

But you have 3.5 meters high, use it.... Rope pulley from the roof for as many bikes as you need to free up floor space. These bikes would probably be less used ones. One or two bike stacker might be worth looking at e.g. 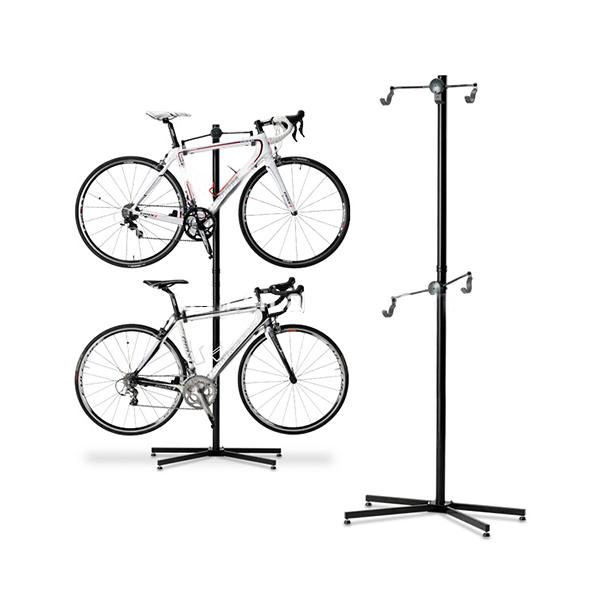 A wall hanging system such as 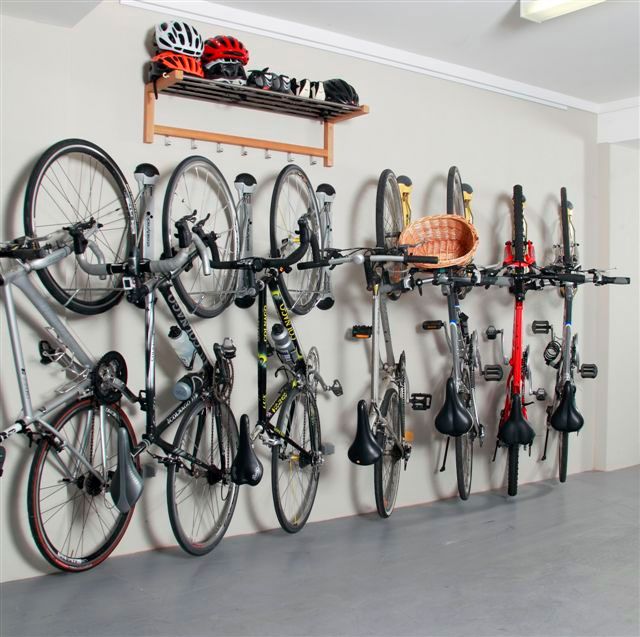 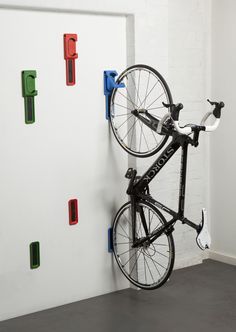 I would look at floor mounting for daily used bikes and hang/suspend from ceiling ones used less often. One thing I would say is get it sorted - theres nothing worse than trying to get out for a ride and having to move a million bikes before you get to the one you want. With kids, having a place for their bikes gives you a valid reason to 'tell them off' when you trip over a bike left lying around randomly at the door way. While you at it, have a place to store helmets, gloves, pumps, car racks etc that is easy to access and setup so each item has its place. Once you have a place for everything, everything will be in its its place.

The other thing I would say (from experience), is don't procrastinate, over think it and try to get it perfect first time, do something, if it does not work well, change it.

I use simple metal hooks insted of expensive constructions. I agree, that the best will be to leave yours three bicycles on the floor, placing them into low front-wheel grips for instance. But be sure that kids will be carefull with bikes placed there, because that construction do not give enough stability, so that bicycles may fall over and be damaged or someone may be injured standing near.Speaking about hooks on the wall it really saves place, but children may need your help to take their bicycles off. For adults it's ok. So I would do two kinds of "parking places" but think properly where to put which bike. 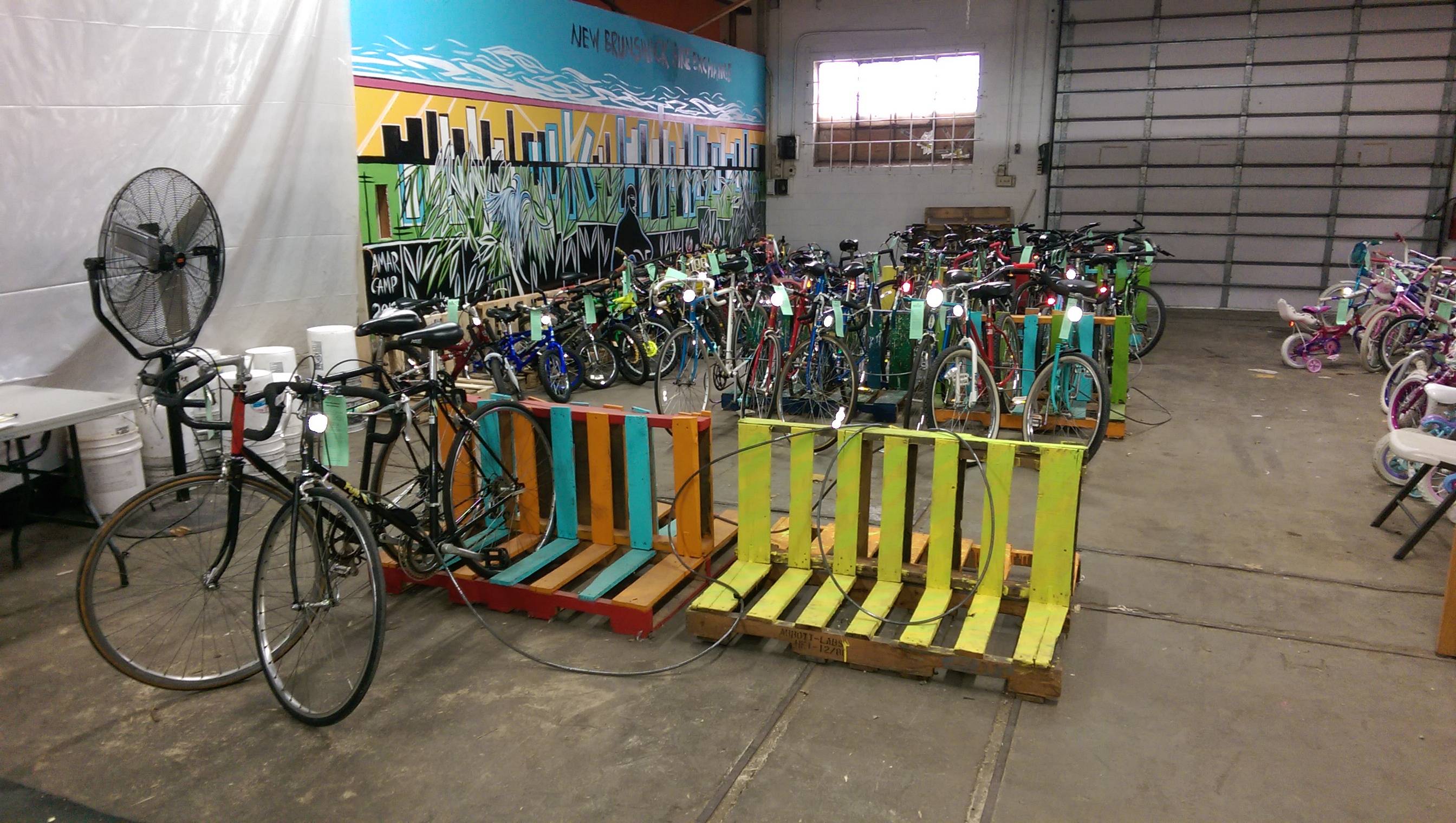 If you want to keep all the bikes on the floor, you can get wooden pallets, cut them in half and attached the one half perpendicular to the other one. Make sure to align the slits so the tires will fit.

Not the answer you're looking for? Browse other questions tagged storage parking parking-racks or ask your own question.

15
Suggestions for outdoor commercial (security/parking) stands
7
Bicycle Storage: Does Kvartal method need studs (or other suggestions)?
6
Where to park a bike during a year for free ? (in the Netherlands?)
4
Efficient bike parking/storage that younger kids can handle?
14
Preparing for long term storage (2 years)
4
Where is the best place to park a folding bike?
3
Minimum dimensions of bike storage shed