Why does my back wheel keep becoming untrue?

So I broke a spoke a week ago, and when I put a new spoke in you know I trued it. Now, a week later, the bike feels like a kayak, because the back wheel is not very straight. Any idea why this would happen?

It's still rideable, and when I have a moment I'm going to go to the shop and true it again (hey, bikerowave!), but it seems like a waste of time to do that if there's some essential problem I'm ignoring.

I strongly suspect your spoke tension is quite uneven. If you installed the new spoke by just adding the new spoke, then that's even more likely.

A wheel with uneven tension will do exactly what you describe. There should be only two different spoke tensions in a rear wheel - the tight side and the loose side. Wheelbuilders will keep working a wheel until they get +/- 10% or so. Smaller range on a new wheel, wider on a cheap and/or old one (wheelbuilders rarely build cheap new wheels, those are made by machines). If you don't have a tensiometer (Park tool one, ~$60) you can possibly do it by the pitch of the spokes but I've had little luck with this - it's more affected by where the spokes cross each other than by spoke tension (ymmv, I have perfect pitch and am in other ways fussy, plus I have access to a tensiometer).

The problem with older wheels is often just getting the nipples to move on the spokes. That can take lube and time. Often more time than the cost of a new wheel. But if it's your time, that's "free". Again, use a grease-based chain lube (or for once, WD-40 or similar) on the spoke/nipple junction and also the rim/nipple area. Then work each spoke gently (less than half a turn) until the spoke moves on the nipple. Realistically, gently is an exaggeration - you don't have a lot to lose by breaking the spoke doing this, except that breakage normally happens on marginal wheels (cheap and broken), so you run the risk of breaking enough to make the wheel uneconomic to repair even if you're only paying for new spokes not labour.

I think your best bet now is to make sure as many nipples are free as possible, then take it to a bike shop. It'll cost $30-$100 to fix, but most shops will let you say "spend $X on it, then call me".

At some point the wheel is so warped and unreliable that you just need to buy a new one. I think you're 90% there right now. It depends on how much you're a gambler... you might spend $30 and get the wheel nicely trued and solve your problem. Or you might spend (say) $50, get the call and they say "it's definitely broken now" and you have to buy a new wheel.

If you're short on money another second hand wheel might work, and it'll definitely be cheaper than a new one. Check your local tip shop/ bicycle recycler for cheap ones.

edit: tensiometers are standard bike shop tools, the cheap Park ones work pretty well and are only about $US60 online. The more expensive ones don't work a huge amount better but cost a lot more ($US300+). I've compared a DT Swiss micrometer-based tool to a Park one and no-one in the shop could reliably measure more accurately with the DT one. It was harder to use and heavier so we went back to the cheap one. 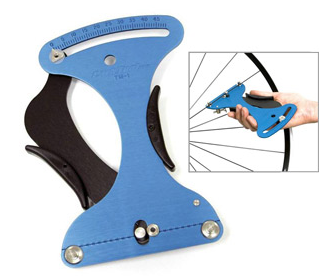 A new spoke will stretch when newly installed in a wheel. This is expected. If you still experience the wheel going out of true after a week or two, there may be something else going on.

Your wheel may have really uneven tension on the spokes. The rear wheel is "dished" so the spokes on the side with the freewheel/cassette will be shorter/tighter/more vertical. If you notice spokes on the same side having more tension than others, that may be part of the problem. A shop will have a tension gauge to help diagnose the potential issue too...

19
Why am I breaking a ridiculous number of spokes?

19
Why am I breaking a ridiculous number of spokes?
5
Lots of broken spokes on one bike, with different wheels
1
My back brakes don't lock the wheel (skid): feature or a bug?
11
Replace rim because of 4 broken spokes?
4
Truing a twisted (vandalised) wheel/rim
2
2 broken spokes same side, can I replace with one from the other side?
1
Replacing multiple spokes (9/36): more like replacing spokes or rebuilding a wheel?
4
Is it okay to true (align) a wheel with a missing spoke?
15
When is a bike rim beyond repair?
4
Pinging sound on new radial front wheel