How can many people move a car -trailer with bicycles?

I need to move a trailer like this one here but with 4 wheels (two on both sides). I have no access to cars. The distance is about 100km or more, and I am a bit unsure how I am going to move it: 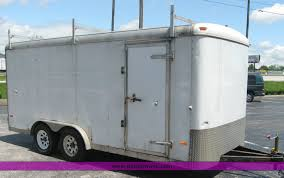 The first question is what the legal situation is. I am fairly sure that in Australia that trailer would not be a legal bike trailer because of the overhang past the rear axle, but the police would stop you because it's too large (they generally don't know this part of the law very well). Either way, I doubt you'd get far before they took an interest.

If you can tow it legally, I'd look at how to activate the brakes in the trailer. You will need to be able to do that relatively easily, because those will be your only effective brakes. That trailer will push a bicycle with it's wheels locked up quite easily. So, make the trailer brakes work.

Then I would build a quick semitrailer-style load tricycle, either a tandem or triplet. Somewhere on the net are photos of a bike shop move (in north america?) where they built a couple of semi-trailer style trike+trailer units for the heavy stuff (workbenches at 200kg+). Broadly, a solid axle between two wheelbarrow-style wheels, one side driven, very low geared, upright trike. You would probably want gears in there, but the main thing is to mount the towball as close to that axle as you can. Have the rear rider operate the (trailer) brakes, and the front rider operate the steering and gears. I would fit brakes to the trike but only for legal reasons and so it can be ridden separately from the trailer.

Depending on the weight of the trailer and the slope of the hills, you may find that you need a few extra riders to help push the trailer up hills. Either way, walking speed is a fair guess at how fast you'll go. Partly because you don't want to go faster than that down hills either.

You will probably have better luck if you do it as a charity ride - it doesn't really matter which charity, just pick one you kind like who will let you use their name and start advertising "fund raising ride - five idiots pull a big trailer from Here to There using a tricycle". With a little effort I'm sure you could even make enough money for them to be really happy :)

Put an advert up with your local paper/Craigslist and offer the free use of the trailer on the proviso that they collect it for you. There are always people wanting to move house etc. and they may be glad of the favour.

Moving this with bicycles sounds horribly unsafe. I recommend against it, and here's why:

Tandems often use drum brakes, particularly on the rear wheels, but if the trailer you're moving is as heavy as most auto/truck trailers, you're going to have a difficult time stopping it from moving, particularly when going downhill, even with a drum brake system built for bicycles. You'd need to find a way to trigger the trailer's brakes from the bikes, possibly to work simultaneously.

From the picture, it looks like this trailer is as wide as an automobile, perhaps wider. I don't think you'd be able to fit that on a sidewalk/pavement in any case, local regulations aside. (Most locales encourage bicycles from riding on the sidewalk/pavement, and sometimes prohibit it entirely. It's difficult to say more without knowing what locations you'll be passing through.)

Keep in mind that if you lose control of the trailer, not only could the trailer be damaged, but the cyclist(s) could be injured, and another driver or a bystander could easily be hurt or killed.

It it's vital to have the trailer moved, I would seriously consider having it moved on a flatbed truck rather than tow it with bicycles.

Depends on the weight of the trailer and how hard it is to hook up. (Your link no longer shows what kind of trailer.)

Look at the amount of weight pulled by single riders in the pictures here.

Now that the link has been replaced by a photo, I would definitely think one bicycle is not enough. :-)

10
How to make a cargo trailer?
10
Recumbent, diamond-frame or trailer to move heavy things?
3
How to attach and mount wheels onto a cargo trailer?
3
Aerodynamic kid's trailer with suspension
3
Croozer bike trailer optimalisation for less tire detoriation
1
B.o.B Yak Trailer on car
3
Bicycle trailer that can secure cargo?