What does marking like “aq/ar” on the sprocket mean?

Shimano sprockets are marked with short strings like "aq/ar", "bg", "as/au/be" and others. For example, "bj bk" can be read on the image below: 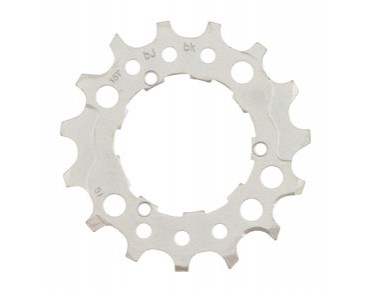 It looks like they mean the hyperglide series to which this sprocket belongs. Is there anywhere a list of these series?

This has nothing to do with dates.

Not sure what A-type was.

Anyway, they made lots of cassettes so 26 letters wasn't enough so they switched to two letters. (And I think it's MTB-specific, for cassettes, road cassettes do without them)

Chainrings had a similar thing - at one time they had 3 types for road, A, B and C

But now they use a two letter code

The code represents the entire set of sprockets or chainrings, and is significant because of 'hyperglide', i.e. the ramps on the sprocket or chainring. The number of ramps is equal to the gap to the next sprocket or chainring, for efficient shifting (if you fit a sprocket designed for a different larger sprocket, then shift performance from that sprocket will be poor). Technically a chainring or sprocket could be defined in terms of the larger ring/sprocket that it shifts to, but I guess writing '34/50' on a 30t chainring is more confusing than writing 34 MA.

An 11t (or whatever) sprocket may have multiple codes because there may be multiple 11-13.... cassettes for a given speed (the letters are specific both to the gear range and the number of speeds (so a 50/39/30 triple chainset had a different code for 10-speed rings than 9-speed).

Sprockets with the same codes should be interchangeable across cassettes (so you could fit an XTR sprocket with the correct code to your cheap cassette), but materials/weight differences are present. Shimano have lots of incompatible chainring designs OTOH and I suspect that chainrings of the same fitment have the same code, e.g., R9100 chainrings are incompatible with 9000 chainrings, and the former for 50-34 are marked 'MS', the latter 'MA'. The cheaper RS510 chainset also uses 'MS' for 50-34, so likely would fit to Dura-Ace and vice versa (though the RS510 rings are much heavier).

If you go through all the chainsets & cassettes on si.shimano.com you could come up with a list, but it doesn't seem particularly worthwhile to do so.

According to this post they appear to be date codes. There is a list of date codes here. They are outdated, but you can follow the pattern to figure out when the sprocket was made. the one in your picture appears to be from October/November 2001 if this theory is correct. This site has a more recent list indicating that this trend has continued. The date codes from that page are partially copied below in case those old forums disappear.

This doesn't appear to make sense with codes like aq/ar, but the codes on the sprocket shown most likely indicate date of manufacturer. AQ/AR may indicate the model of cassette they came from. Shimano documentation says that ar is associated with the CS-HG400 9 speed sprockets. AQ seems to be associated with the CS-M770 cassette. If you google the specific code you are looking for, such as "shimano code aq" (without quotes) you will most likely find shimano documentation for the part in question.

To provide some supplemental information to @thelawnet, I'm looking at my 11s 105 11-28 and 11-30 cassettes. I see a 3-digit alphanumeric code whose meaning I can't decipher, then a marking like 28A or 30A. The numbers there are the tooth count. The final marking is 11s, which at the risk of stating the obvious means 11 speed.

Pages 9 and 10 of the dealer manual for the Dura Ace and Ultegra cassettes provide some detail on the letter suffixes. My understanding is that those detail the position of the shift ramps for the road cassettes. For example, the 12-28 cassette, only offered in the Dura Ace group, has these codes:

Most consumers wouldn't need to bother with these markings. However, I'll note that if you inspect the cog sequences for the 11-28 and 12-25 cassettes closely, you'll see that it's possible to take those cassettes and create a custom 12-28 cassette, as some people have reported on this thread on the Paceline forum, and the shift ramps should line up as Shimano intended. Basically, we can infer that, for example, a 15A cog can pair with a 16A, 17B, or a 17C cog. 16A cogs pair with 17A, B or C cogs.

This may seem like an odd thing to want to do. However, I find that the jump from 15 to 17 teeth is a very significant change in gearing. It disrupts my cadence a bit. Many riders may not be so sensitive to cadence changes, and it is less critical if you are riding solo. Additionally, the top 5 titanium cogs on Dura Ace cassettes wear out very fast, and two Ultegra cassettes are often cheaper than one DA cassette (or two 105 cassettes, or one each of 105 and Ultegra). In my case, I have 52/36 chainrings on my bike, and I don't use the 11t cog in this setup. If I had a standard compact, I'd probably favor keeping the 11t just in case.

What if you want a custom cassette where you can't replicate Shimano's desired sequence of shift ramps? I haven't tried this. I'd expect it to work, but to shift less smoothly than the original. This guy on the Weight Weenies forum reported taking an 11-34 road cassette, changing the starting cog to 12t, and also adding a 14t cog. I haven't inspected the cogs involved, but I suspect they are un-"approved" pairings.

Shimano's 11s MTB cassettes don't appear to list this information in the dealer manual. However, per @MaplePanda’s comment, the individual sprockets have similar letter suffixes, so I assume the principle above still applies.

In any case, you can almost surely find people on the internet who have some nit to pick, but most riders should be able to adapt to the stock cassettes. Also, I don't believe it's cost effective to go and buy single cogs, although they are available for purchase.

A side note: at least some Campagnolo cassettes (the document links to a dealer manual for 10 and 11s cassettes) also appear to use letter suffixes to designate the shift ramp location. I don’t have my hands on SRAM cassettes, but the 11s Red and 12s Force and Red cassettes are machined as one piece of steel (actually the top cog may be loose, but that’s only one cog) so there would probably be no point to designating sprockets in this fashion.

Not the answer you're looking for? Browse other questions tagged shimano sprocket hyperglide or ask your own question.

0
How To Choose A Proper Sprocket Combination For A Road Bike Cassette?
3
Can I replace only the smallest cog on my rear cassette?
2
How to fit BB bearings to install Ultegra Crank on road bike Wilier Cento 1
1
Shimano ultegra 11-28 to 12-32 options?
4
Possible to identify sprocket without taking the bike apart?
3
Shimano roller brakes: differences between each model and interchangeability
1
Shimano 105 FD-R7000-F front dereailleur chain rub
3
Freewheel threading on Miche flip-flop hub
13
Was I just sold a used cassette?
3
What are/were the differences between the various Shimano square taper cartridge bottom brackets?