What is the difference between I.S., post, and flat mount disc brake mounting standards?

And why do most people here spell it 'disc' rather than 'disk'. Is this an Americanism vs. British English?

IS mounts (also frequently called IS tabs, disc tabs, etc) are unthreaded eyelets 51mm apart that bolts run through parallel with the hub axle. In almost all cases the brake caliper is then bolted to an adapter that has one set of threads for the IS mounts and another 74mm apart for the caliper. (There are a few caliper models that omit the adapter. Shimano, Hope, and Magura have all made brakes like this.)

IS has one clear upside: all the threads are in a relatively cheap and easy to replace adapter. The disadvantages are that it's more mechanically complex and expensive since there's always an adapter, and the design of the standard is such that the same adapter doesn't adapt the same caliper to the same rotor size front and rear. A adapter for 180mm in the front is an adapter for 160 used in the rear, for example.

With IS, outside of a weird custom fork, 160mm is the smallest size you can use in front, but all bikes with rear IS mounts can take a 140mm adapter.

Post mount places two threaded M6x1 holes 74mm apart on the frame or fork in the orientation that a caliper can be bolted to directly without any adapter, or with a post-mount adapter in between along with its supplied long bolts if a larger rotor is going to be used. The most common setup is for the minimum rotor size (the size you'd get the caliper positioned for if no adapter was used) to be 160 front/160 rear on most mountain bikes and 160 front/140 rear on most road and cross bikes, but all sorts of exceptions exist, i.e. downhill forks with 200mm minimum rotor sizes. Although it's seldom denoted this way by frame manufacturers, post mount is really a group of standards that you could call "140mm post mount", "160mm post mount", etc.

Post mount is mechanically simpler, cheaper, and arguably more elegant. It has the disadvantage of putting the threads in the frame/fork, which introduces some risk of difficult or impossible to repair damage resulting from carelessness or low-quality parts. It's acceptable to helicoil a stripped post mount in most circumstances, so the actual risk of ruining a bike forever with one overzealous tightening is small. I've done this repair a number of times, particularly on certain low-end suspension forks where the thread quality was poor to begin with.

Post mount does not have IS's issue where the geometry is different front and rear. A +20mm post mount adapter does the same thing on both.

Facing a rear post mount on the chainstay, where they often are now on road/cross bikes, usually requires an offset facing tool to reach in and do it without bonking into the seatstay. If all manufacturers and dealers were well equipped and did their jobs right, this wouldn't make a difference for consumers. As it is I feel like there's a relatively high proportion of bikes like this sent out into the world still in need of rear post facing, but I don't have any proof.

IS and post mount adapters are mostly dimensionally interchangeable between brands. It's wise when mixing brands though to take a close look that the pad contact looks how it should; weirdness does occur in this regard sometimes even though on paper it shouldn't be able to.

Flat mount was designed for road bikes and has become the standard there due to its weight-saving and aero construction values. It has now spread to XC mountain bikes. It was designed by Shimano and has now been adopted by everyone else. As the name indicates, flat mount puts the caliper closer to perfectly flush with the frame or fork.

Whereas IS and post mount take the same brake calipers for the most part (the exception being adapterless IS-specific brakes), flat mount is a new caliper standard altogether. Adapters to put post-mount calipers on flat mount frames and forks exist, but in individual cases it's possible for hose/housing routing or frame clearance issues to make it ugly or unfeasible. Adapters to put flat-mount calipers on post or IS mount and forks frames exist, but face spatial constraints that may make using them impossible or impractical in a given application.

Flat mount calipers have the mounting threads in the caliper itself. Flat mount only is compatible with 140mm and 160mm rotors for either front or rear. (It's likely that somebody will break this rule someday, as in the front particularly there's nothing physically preventing it.) There are two completely types of flat mount adapters, for front and rear. A front fork adapter (called a 'mount plate' in Shimano parlance) is always used. It's switchable for 140 and 160 by flipping it around. The adapter is first installed onto the caliper in the desired orientation using flush-mount bolts. The fork has threaded mounting holes that the adapter then bolts to through the holes at either end of the adapter. 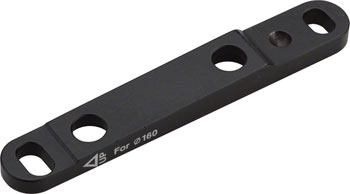 In back, flat-mount compatible frames use bolts going through a frame member, typically the chainstay, to thread directly into the caliper if a 140mm rotor is used, or an adapter for 160mm.

Flat mount in an of itself is a design that did a good job of minimizing the number of adapters that may be needed, with the flippable front adapter that's always used and a choice of either no adapter or a +20mm adapter in back, for a very minimalist total of only two parts, but there are also 4 different flat mount to post mount adapter caliper permutations (140 and 160 for both front and rear).

Rear flat mount installations require the bolts to be exactly the length needed to protrude through the frame member, which vary in size, with a certain amount of length left over to engage the caliper or adapter threads. Some manufacturer feature a special tip on the end of their flat mount caliper bolts that fits a safety retention clip, creating a situation where bolts can't simply be trimmed to length if the caliper is to be installed as intended by the manufacturer.

At the moment flat mount adapters are interchangeable and universal between brands as far as I know. Hopefully it remains that way, but there's nothing stopping someone from releasing a brake caliper that's an exception.

Not the answer you're looking for? Browse other questions tagged brakes disc-brake design or ask your own question.

7
I am putting drop bars on one of my MTB Shimano 10 speed 1x Deore. I am looking for a road hydro shift lever
7
Can my fork support disc brakes?
6
Giant Defy Advanced 2 brake replacement
4
Determine Rotor and Caliper Size
3
What are these holes for in my Diamondback Sorrento?
3
Disk brake caliper fit, inboard width of calipers
0
Convert MTB mechanical disk brakes to hydraulic
1
Upgrading from TRP to Shimano disc brakes