Right of way for a raised crossing?

It contains a number of points at which pedestrians are evidently intended to cross, as the roadway and cycleway is raised.

Unfortunately, this is the best picture I have of one which was taken while CS3 was under construction: the raised segment of the crossing continues into the cycle lane. 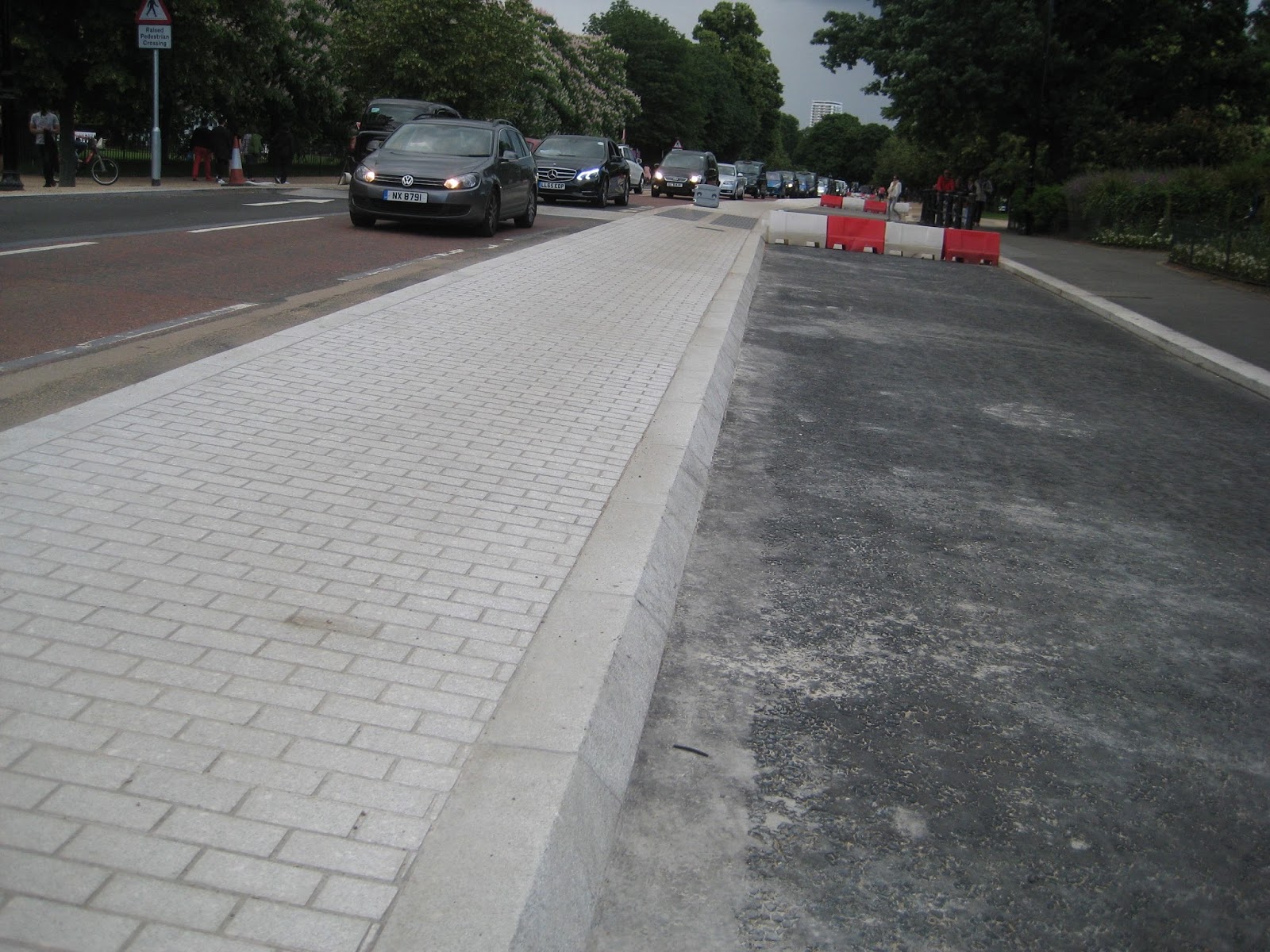 However, I have noticed on my commutes that very few cyclists or pedestrians seem to know who has the priority at these crossings. They are not laid out like zebra crossings, as exist on some cycle lanes in london, which had led me to believe that the cyclists had priority, and the raised sections were advisory in nature to pedestrians, just like crossing islands are usually when not marked by a zebra crossing.

The highway code seems to me to be silent on the issue: it only mentions specific types of marked crossings, rather than generic raised crossings with no markings.

Who has the priority here?

As requested by one of the comments, this is what one of these looks like: 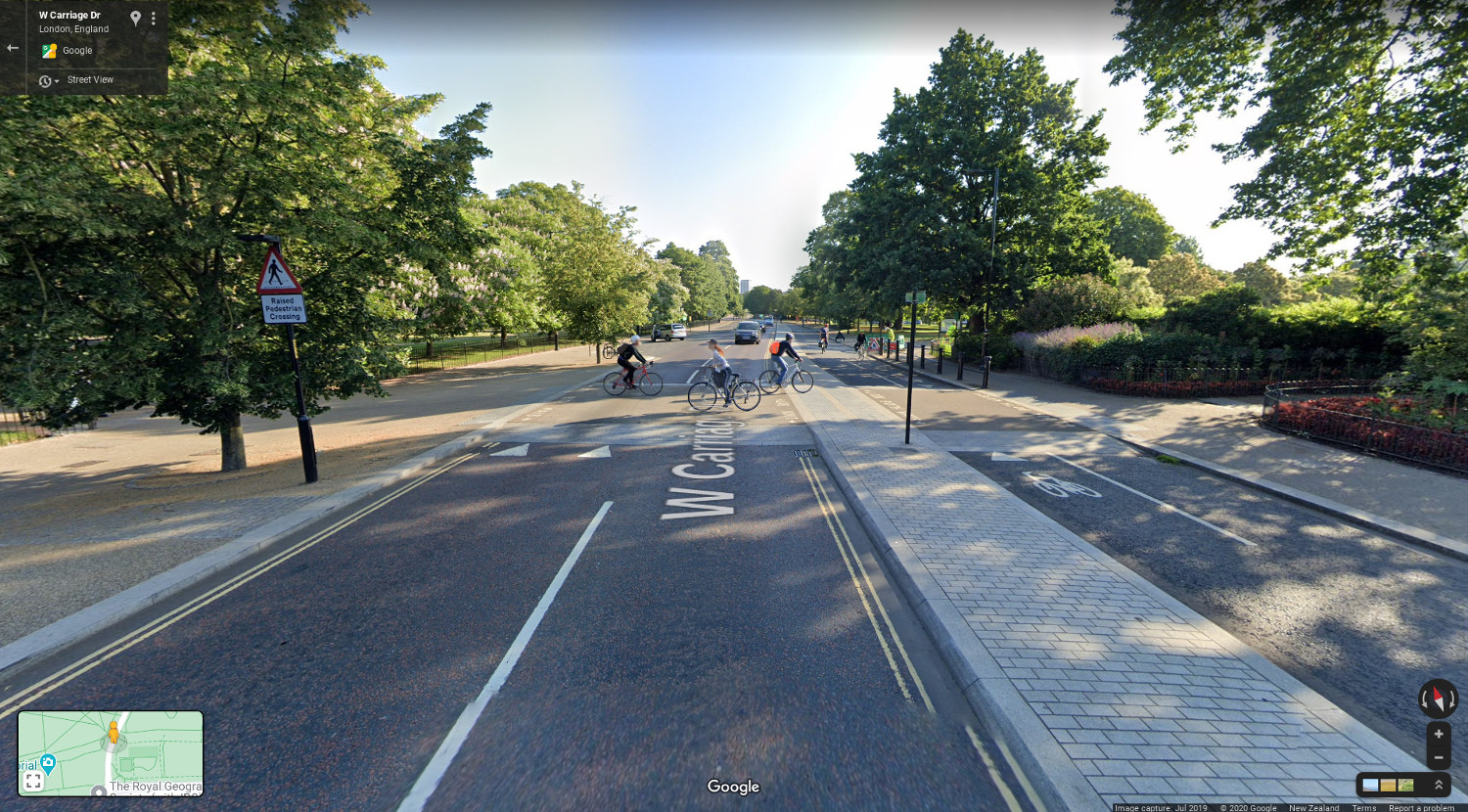 Both from West Carriage Drive in Hyde Park https://maps.app.goo.gl/L3J2urZCehHJj1Uj8

The vehicular and cycle traffic has priority, since the crossing is not a zebra crossing and there are no traffic lights, which are the only situations in which the Highway Code talks about pedestrians having priority.

However, as you have noted, many people seem to be confused by the crossing, so you should be ready to stop in case a pedestrian does step into the roadway or cycle lane. Also, be alert to the possibility of motorists stopping and beckoning pedestrians to cross into your path and the possibility of a group of pedestrians blocking the cycle path because it was clear when they started to cross but now they're waiting for cars on the road.

English law is actually very clear. It is deemed to be who is at fault. Pedestrians are very rarely at fault (a resent case of a pedestiran crossing a road whilst looking at her mobile phone only partially relieved the cyclist of fault.) Even if there is no crossing at all, a pedestrian will rarely be found at fault under English Law.

In this instance both motorists and cyclists are clearly being warned of a pedestrian crossing. You will also find a warning triangle some distance ahead of the crossing. There are again triangles in front of the raised crossing. Therefore if a cyclist or motorist hits the pedestian, then 99.9% of the time the cyclist or the motorist will be deemed at fault. Furthermore, if the pedestiran if injured or killed this could result in a criminal conviction against the cyclist or motorist.

Therefore act diligently and give way to the pedestrian.

The highway code simply makes little-to-no reference to this specific situation. There does appear to be a somewhat similar raised crossing in the image below rule 206: 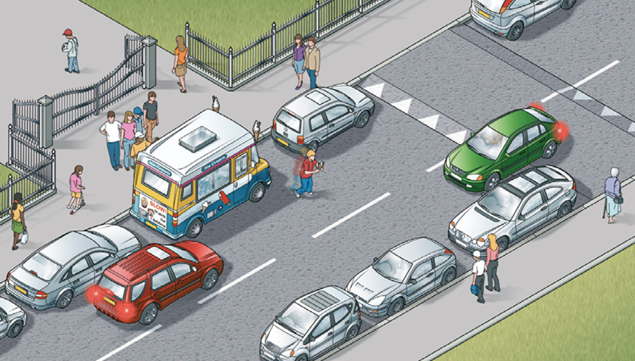 In this image the cars have the yield triangle signifying the give-way. This seems to suggest, albeit not in writing, that the pedestrians have priority. That fits with the overall theme of the code that pedestrians have the priority at designated crossings that aren't signal controlled.

Not the answer you're looking for? Browse other questions tagged legal uk etiquette london or ask your own question.

5
Is it legal for me to ride a bicycle on the pavement (sidewalk)?
7
The back brake on my bike is not functional, is it illegal for me to cycle in the United Kingdom?
7
Who has right of way at a staggered crossroad
25
Discouraging motorists from stopping at an intersection when they have the right-of-way
4
Is it OK to use pedestrian phase of pedestrian crossing to join/leave the carriageway? (UK)
12
Is 17 miles (27km) each way a lot for a newbie cyclist?
1
Who has the right of way crossing a shared pedestrian crosswalk / bike path? (USA)
6
Is it legal for a car to overtake me as I overtake a parked car in UK?
16
Turning right but can't see cars coming (UK)