When I was younger, it seemed most mountain bike shocks had rubber boots on them, but now most seem to be "naked."

How important were the shock protectors that covered the exposed part of the piston - either the generic rubber boots or the neoprene "lizard" protectors? Did they make a difference for most riding styles?

Why has naked become the new thing? Is this just value-engineering? 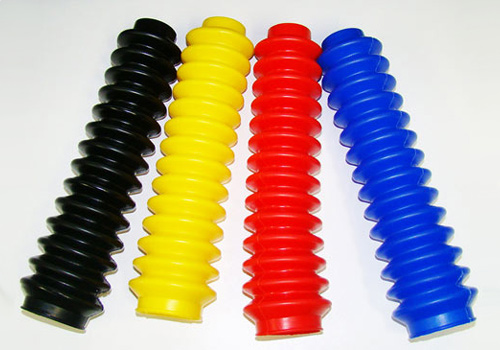 And is there any meaningful difference in performance between the two?

Fork boots were used to keep dirt off the stanchions and help keep the wipers clean. Modern quality forks have wipers that clean better and last longer, and more abrasive resistant stanchions, so no need for a boot. Cheap forks don't put boots on because in today's market place, boots scream cheap fork

Dirt always manages to get behind the boot no matter how well sealed it is, this has several detrimental effects. Any dirt trapped between the boot and stanchion stays there and increases rubbing. The boot transfers dirt back to a stanchion wiped clean by the wiper. To make matters much worse, and probably the reason they have fallen out of favor the most - the better the seal, needed to make them most effective, the harder it was to clean behind them. Few people could be bothered (or never even knew) to clean behind the boot. Given that, for a typical user, dirt trapped behind the boot is far worse than dirt a naked fork is exposed to. Additionally moisture can be trapped in the boot, increasing the risk of corrosion on the stanchion, defeating the purpose of having the boot.

Boot may have an advantage in extremely muddy conditions provided they are well sealed and removed for cleaning regularly. However, the effort is probably not worth the reward.

Not the answer you're looking for? Browse other questions tagged shocks or ask your own question.

1
Why are rear shocks at a 30 degree angle and the mud-guards so high?
9
Why do shock pumps use a Schrader valve?
2
Treacherous ride - top half of fork points backwards, but the bottom points forward
2
Service/maintanace of Manitou fork and shock
0
Problem with suspension fork
2
How do I lock out the front fork on my RST Neon shock?
2
Fork oil spilled out. Rebound Damper Assembly is missing