How to bend handlebar to customize it?

Here in my country is kind of difficult to get certain types of handlebars, but it is easy to get flat and riser mountain type handlebars and standard types of road drop bars.

So I'm investigating whether it is possible to purposefully bend a straight handlebar to have it in another shape.

Can it be done with common store-bought tools? If not, I can take it to a metal working shop and get it bent there? Will it be safe?

In particular, I'd like to turn straight handlebar into a bullhorn shaped one.

I'd like to have this done on aluminum but i'm not sure whether a finished handlebar can be bent.

A second option is to make the handlebar out of steel pipe that is easily bought locally. However to install it on a bike shims will be needed to make up for the "bulge" that handlebars have in the clamp area.

I have currently configured my bike with a short straight handlebar fit with bar ends and it works pretty well for my purposes, but I'd like to have a rounded curve instead of the sharp angle that the bar and bar ends have.

I currently do not have the means to buy a ready-made bullhorn via internet by myself, but if I had, the hassle of shipping, customs taxes and other annoyances made me wonder if making my own is feasible.

Certainly not with aluminium / alloy bars. Any bending stresses the internal structure of the metal, weakening it. Even in a metalworking shop, I would be doubtful of the safety of the product. I hesitated to say final product because the result could be ... final. For you.

Even with steel bars, I wouldn't do it. With steel bars we used to bend them slightly to have our preferred shape. But the wall thickness of steel bars these days is so low that I would not recommend even slight bending. With such low wall thickness almost no amount annealing or other treatment will restore full strength.

The other thing you mention is using plain pipe. Since it's not high-tensile steel (it'll be plain carbon steel), to be strong enough it will have thick walls and be heavy.

I wouldn't recommend bending handlebar -- if the bar breaks (which is more likely due to the stresses you're putting on it), you're probably going to lose some teeth or worse. I don't know your skills with metal, so I'd also probably not suggest the bent piece of tubing approach.

If you really want a bullhorn and want to make it yourself, your best bet is probably to buy a set of drop bars and cut the drops to get a bullhorn shape. This is likely safer. You might need a different stem (road bars and straight bars generally don't have the same clamp diameter. You can do this cutting it with a hacksaw with an appropriate blade , some sandpaper and a bastard or finer file; I guess a pipe cutter would work too, but you're less likely to have access to one that you can use (the little ones most people have at home, which are like 10 bucks at home depot are too small). I would not do this on carbon fiber bars, but I've seen it done on Aluminum and Steel bars a lot (especially among hipsters on a budget; Most of them are still alive, the rest had beard, flannel and glasses accidents..). It is likely the safest option for a home made bar (by far), but of course, this is completely at your own risk (I think its pretty minimal on a sturdier handlebar, but again, you're going well beyond what the thing was engineered for, so no guarantees.). 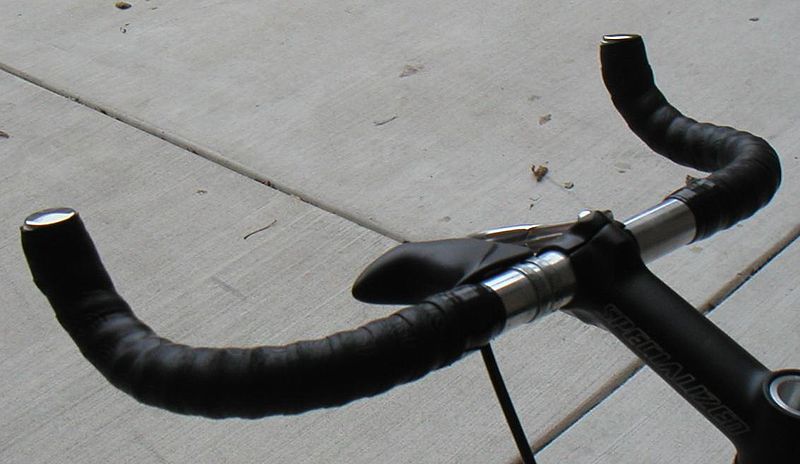 You'll likely need to grab a few new brake levers and shifters too though (I'd be okay with shimming the shifters on; brake levers not so much; the grip diameters also generally don't match).

Personally, if I wanted bullhorns, I'd buy bullhorns. There are places to cheap out on a bicycle, but something that takes a significant amount of stress like a handlebar (e.g. when accelerating hard, you pull on it), I wouldn't mess around with it.

Doing it safely with aluminum is not simple or equipment-minimal, either modifying it or making it from scratch. But, if you want to make a hobby of it for a while, you can do it safely in steel in very equipment-minimal fashion.

Here's a link to the public domain book usually referred to as "Bicycle Repairing 1896." It's a US bicycle shop repair book from 120 years ago, when the distinction between manufacturer and consumer-level service shop was nothing like we know it now. There's theory and instructions for how to fabricate many parts of a bike using the technology of the time. Page 115 shows a way to bend bars with a simple, carefully made hardwood form. Note that the type of wood they're talking about isn't so easily obtained these days, but it's around.

Make sure you choose steel tubing that will accommodate the type of controls you want. If you want it to be like a conventional bullhorn, they use road bar OD for (23.8mm or 15/16") for things like track grips and cross levers. But if you want to run tri levers, you'll need to make sure the tubing ID is right for the ones you want, which may involve jumping through some hoops because they're all made for an aluminum or carbon bar with greater wall thickness than you'll probably be working with in steel. 15/16" tubing does exist but it's not one of the super common sizes. Especially if you're brakeless, you may just decide to use 22.2mm (7/8") tubing because it's much more common, the smaller OD will make it easier to work with, and it will also be easy to make a stem clamp shim using a piece of 25.4mm tubing in the common .065" wall thickness. (The "telescoping" wall thickness for common steel tubes used in bike-land.)

I'll leave it to you to figure out what you need from the steel tubing in terms of safety, workability, and availability, but needless to say you need to get all three points right.

Could you bend one yourself? Probably.. but it would lose structural integrity if done incorrectly. It may seem okay but could fail catastrophically under load. Without using a pipe bender the material would likely crease which could potentially lead to stress cracks and end up bad.

To do it correctly, or have a shop do it, you would need steel tubing and a suitable pipe bender. You may be able to use a pre-existing bar but i worry it would weaken the structure. I'm by no means an expert, this is just my 2 cents.

Lots of motorcycle and chopper people have bars custom made or make their own, it needs to be done correctly to be safe, but it can be done.

I don't know enough about aluminum to answer that portion but i would be scared that the material would not take well to a second shaping.

Steel and aluminum conduit are routinely bent using nothing more than a tubing hickey. A piece of conduit is uniform in diameter whereas most handlebars I've seen are larger in diameter at the point where it clamps to the stem so you may have to make up for the difference with a shim made to fit over the tubing but with a little space (1/8" or so) so that when you tighten the stem the shim has room to clamp down. You could use a piece of tubing for the shim.

Not the answer you're looking for? Browse other questions tagged handlebars diy customization fabrication or ask your own question.