Which Bike (Mountain, Hyibrid, Cruiser or Road bike) I should buy if I want to carry my 3 year old daughter on a Child Carrier (fits in rear).

Here is one image of child Carrier I have. It attaches to the rear carrier and stays quite stable for normal usage. 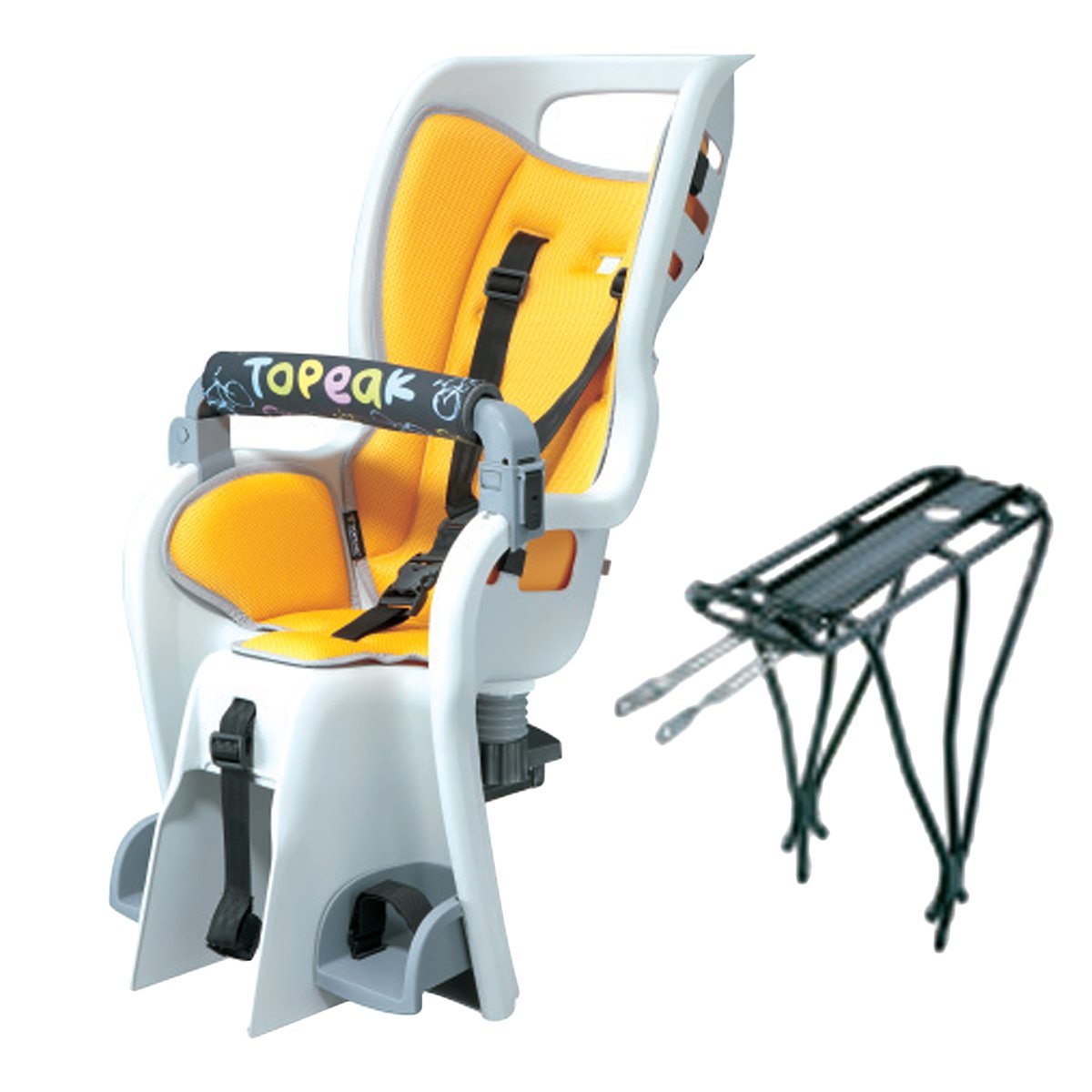 As I want to use my bike for occasional office commute as well, cargo bikes doesnt fits my need.

Safety, Ease of use, utilitarian value and reliability are primary factor for me. Any advise is welcome. ( I am also fine with changin child seat if it is not safe)

Thanks in advance for you advise.

A 3-year-old affects the bike's balance and handling, so you want something quite forgiving. Suspension will make you work really hard with the extra weight bouncing around over the back wheel (even just front suspension) and you should be wary about riding the sort of thing that really needs it on a back-heavy, top-heavy bike.

Road frames are often carbon fibre -- don't even go there with trying to mount heavy loads. Plus they aren't built for forgiving riding. There's also no point -- a child in a seat (or an empty seat) is an effective airbrake. Skinny tyres aren't great either. If you really want drop bars, go for a tourer, they're more designed for attaching and riding with loads.

So you're left with hybrids, cruisers and other upright (city-style) bikes. These tend to be alloy or steel, and often have rack-mount points, which you might need. I normally ride a hybrid, and take my 3 year old on the back. Having carried her on an e-bike with cruiser bars and a very upright sitting position I would said the hybrid is easier, but that may be about bike fit. Among these, it should fit you (you'll be riding slower with a heavier load, fit matters) and should handle well including riding one-handed to signal.

The ability to carry some form of front luggage is very useful. This could be a front rack or handlebar bag. I can squeeze a pannier onto the rack under my rear seat, but it's behind the back axle and makes the handling even worse. Conversely a front bag actually helps with the weight distribution, as does a well-balanced pair of front panniers.

Reading your "on a child carrier" as meaning a seat mounted to the bike, you have a few options:

Front seats. I've only mentioned these in case you don't know about them and to get them out of the way.

Again only to get it out of the way:

Now for the rear seats:

Examples are for illustration only. Sorry they're only links but image licensing is a pain.

After @ChrisH's thorough answer (+1) I thought I'd give an experience report.

When my kids were small, I used a general purpose touring frame for this job. It has more relaxed geometry than a road bike, mudguards (fenders), wider tires, and SPD pedals. It's also heavier, which is an advantage for this application.

The child seat I used was similar to the one shown in the question.

I found that we never did actually put the seat on my wife's bike. If the family is going for a ride together it turned out to be better to have it on the stronger rider's bike, and she could both keep up, and was able to ride beside the child and interact or check on him / her.

If the seat has the ability to be tiled back then my advice is don't use it. The child's weight is already so far back on the bike that the extra tilt made the bike less stable and caused the front wheel to lift on steep hills. If that happens, of course you will just lean forward. 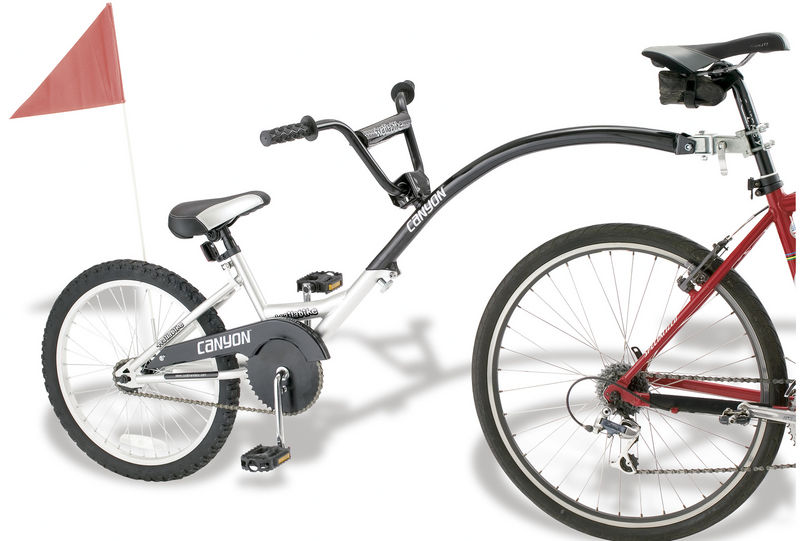 (Set it up properly with the seat at the correct height and angle).

When my daughter was riding the trailer-bike I had to tell her to stop pedaling, otherwise I could not stop at traffic lights :-)

I used to take my daughter to kindergarten using the bike seat and later the trailer-bike. At the kinder I was lucky that I found a place I could leave them safely so that I could continue my commute unencumbered.

Depending on your budget and family enlargement plans, what you can also consider is to buy narrow, 2-wheel cargo bike like below. It's easy to ride, like traditional bike and can be seen as multi-purpose mean of transport. 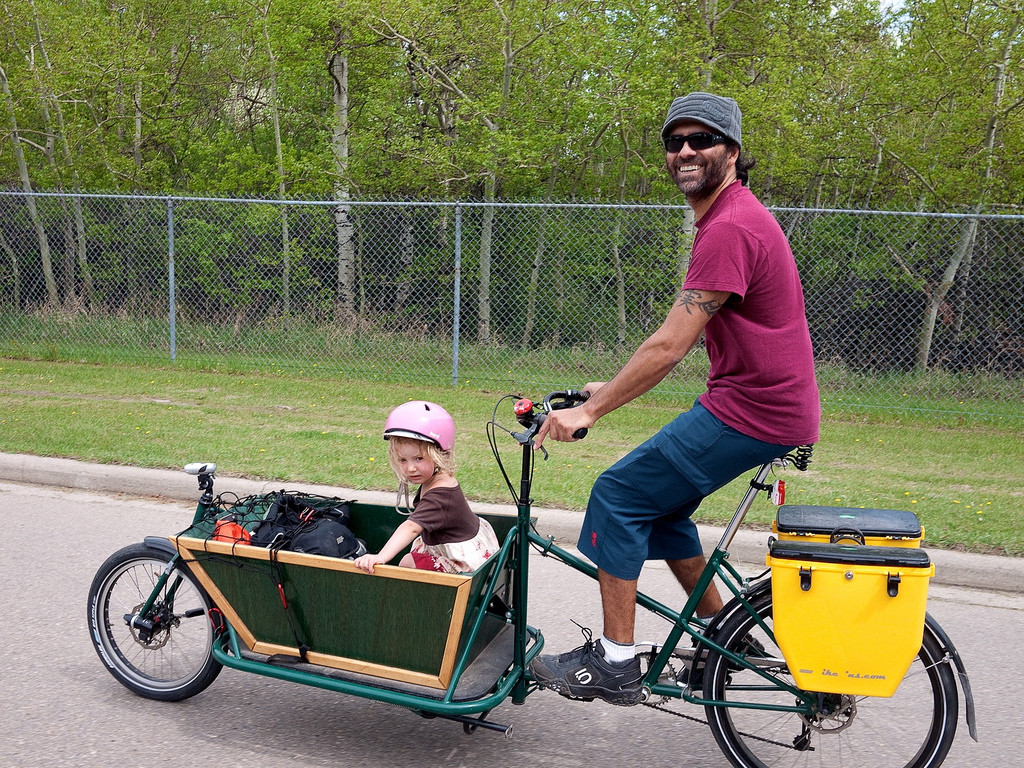 Equipped with roller brakes and internal gear hub will be reliable, easy to handle and cheap in service.

It is for sure more expensive than city bike with hamax seat, so you have to consider possible profits and savings. Even if the price is comparable to decent road bike price, it is the same situation as comparing Porshe 911 price to Scania truck. First one is for sure nice to drive, but Scania beats Porsche, when it comes to fulfill your requirements. It is not worth to buy such if it will be used just from time to time. But then a preferable option is to join/set up local cooperative. Read more here: MokoVeloCoop. Text is in polish, so making use of Google translate might be essential.

I'd also recommend a cargo bike but instead of the "Dutch" style that krzyski mentions, there's also the "stretch" style. This particular model has an electric hub motor for additional oomph.

The step-through design also makes it easier for you to not kick your child in the head when you get on the bike. If you're getting any model of child-carrier where the child is in the rear, get a step through design especially if you want your kid to go to college and/or not need years of therapy.

These stretch designs tend to be a little cheaper than the Dutch designs as they don't require a complicated front steering mechanism. They are also lighter and may even fit on some bus racks (depending on how much they were stretched). They still cost the same as a low-mid road bike, though. 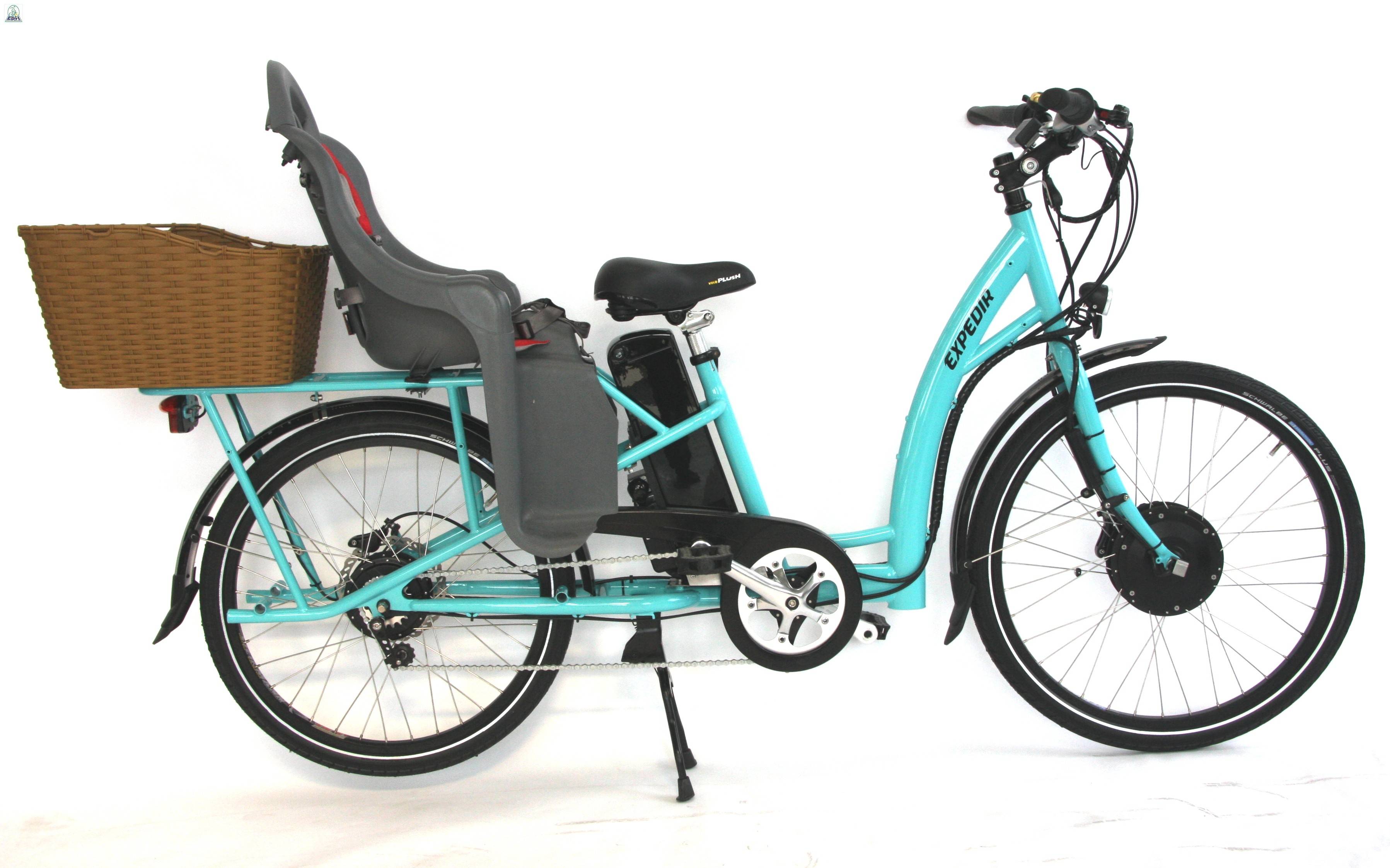 Not the answer you're looking for? Browse other questions tagged road-bike mountain-bike hybrid-bike child-seat or ask your own question.

1
What Schwalbe Nobby Nic should I buy?
47
Toddler bike seat vs. bike trailer?
0
Which spoke type do I need for my bike?
5
What type of shoes should a commuter/road biker use?
5
converting from MTB to hybrid, what should I consider
1
What type of bike
0
Which type cycle should I choose. Need Help
1
Should I buy a mountain bike, what size should it be?
3
What inner tube should I buy for 47 tire size, 650bx47c tires?
6
Which Type of Bike Would You Select If You Needed To Commute, Ride Fire Roads, and Regular Roads With 1 Bike?