As someone who has never had a bike with internal brake cable routing (in this case through the top tube), I bought an '87 Panasonic DX 3500 bike for restoration.

The frame as well as many of the components are made by Tange, a Japanese manufacturer.

Before removing rust and touching-up the paint, I am going to strip the frame entirely and that would include the black plastic guides the brake cable enters and exits the top tube through. (BB and headset need replacement, so I would have stripped the frame nonetheless.)

The outer cable is routed through said guides; pulling it on each side makes it move on the other side as well, which means and the guides are attached on the top tube like shown on the photo below: 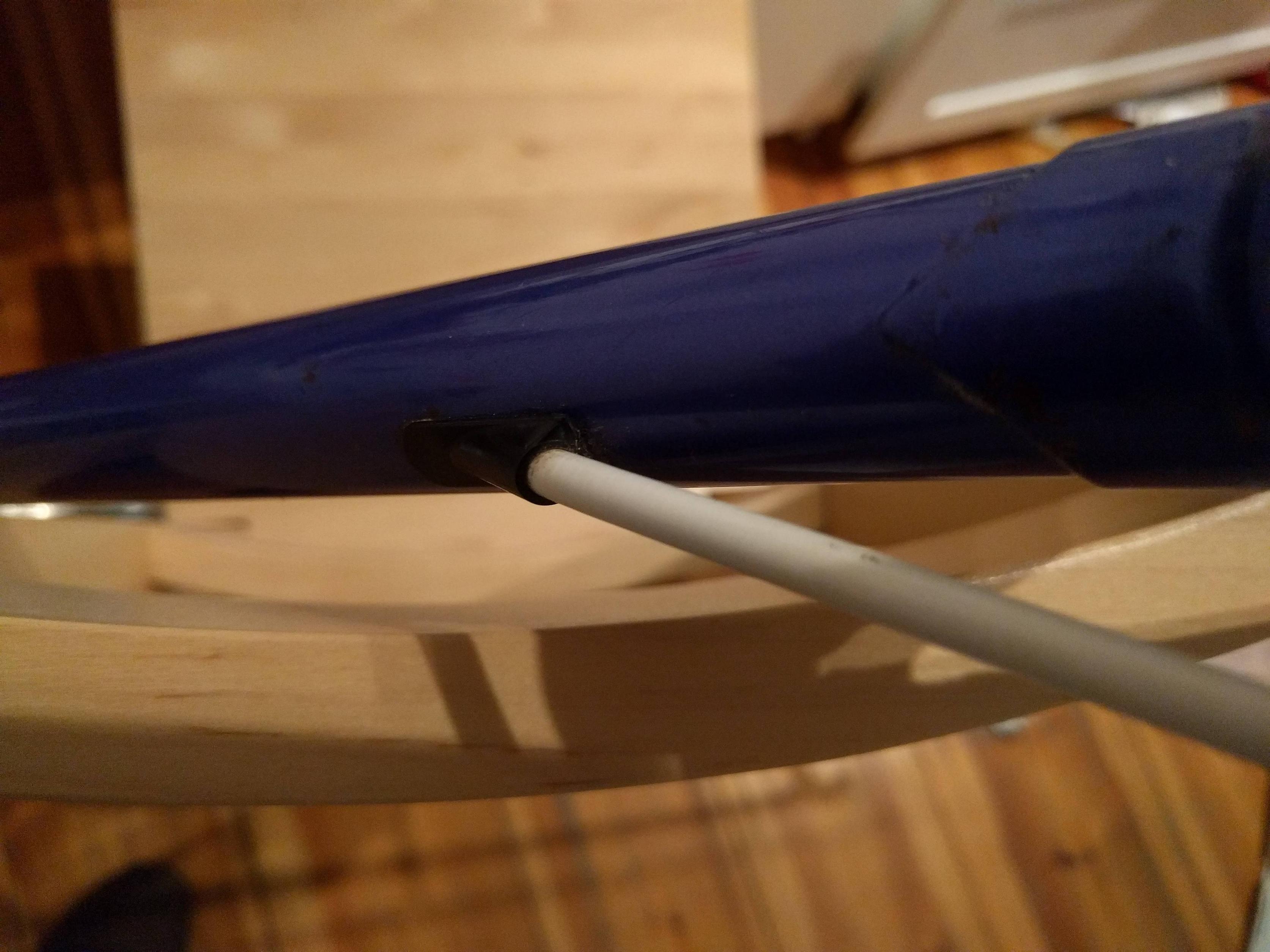 Having broken hard-to-replace plastic components before, I really don't want to use any force before being sure that's the only way to do this.

I would expect there to be a release pin on the cable guides, but I haven't found any.

Does anyone have an idea about how to remove the cable guides — and in case of emergency, knows how to find a new replacement or if they are non-removable, even for maintenance?

This is going to be hard work given you want a bare frame.

If it were a simple swap of cables, you'd feed the new outer onto the old inner, and pull that up. The new outer would follow the end of the old outer, and it would find the top exit hole because its on the old inner wire.

Once the new outer is in place, you whip out the old inner, and then feed the new inner through the new outer and connect like normal.

You basically don't know if the outer that passes through the frame is encased in a guide tube of some description, or if its just bare in there.

The only way to try this would be to hold the outer at one exit point and try and shove more outer in at the other exit point.

Finally - it might be a good excuse to go buy one of those endoscope cameras... I've wanted one of them for a long time but never had a justification. You could whip out the headset and look along the tube to see what you see.

Not the answer you're looking for? Browse other questions tagged frames cable-routing or ask your own question.

11
Do I need to plug internal cable routing ports?
13
Name that frame! (Likely Japanese, likely made in 1986, with known serial number, likely a Bianchi)
1
Can someone help identify my bike frame?
2
Can a bike frame be retrofitted with internal cable routing without Disassembly?
4
Is shift cable protector under bottom bracket on cyclocross bike important?
6
Prevent internally-routed cable housing from vibrating against frame
0
Help identify my bike frame
2
Shifting cable maintenance/swap with internal cabling on Cube nuroad
8
What does the cable sheathing on internally routed cables do?