How to fix a seized V-Brake arm?

I was checking the brake pads on my bicycle and I noticed one of the arms seems to be seized: 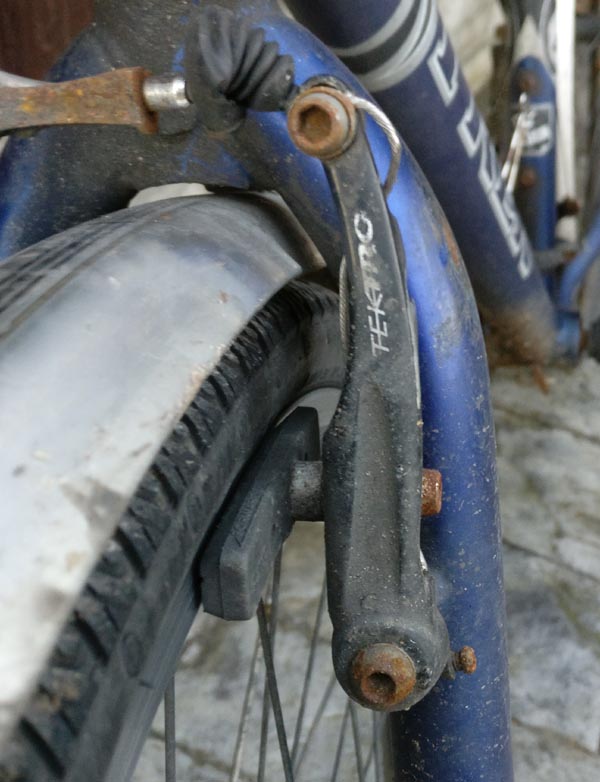 It's this arm (I hope that's the right technical term). It will move but it's very stiff and when I use the brakes the other arm is doing all the work.

I did a search of the site and this seems a common problem but I couldn't find a simple explanation of how to fix it. Do I just undo the hex bolt at the end, apply grease and hope I can put it all back together? If so are there any I wish I hadn't done that pitfalls to avoid?

If it's relevant this is a town bike, a hybrid, rather than a true mountain bike so it's not a performance machine.

V-brakes aren't too complicated but there are a few things to watch out for:

Once you've taken it to bits, clean all the muck and loose rust off the parts, the grease and reassemble. The bolt should be tight. You'll probably need to do the other arm as well, and may need to adjust the return spring screws. Obviously don't get grease or greasy hands on the pads.

Your brake pads are worn down. As a result, you've had to cinch down on the brake cable so much that there's almost no brake movement possible.

I warn against trying to remove the brake arm itself from the frame. There's a spring that keeps tension against the frame and when that goes sproing, it's a bit of a pain getting it back on.

Now there's a good chance that your brake spring itself has broken/stuck and in that case, you have to replace the entire brake assembly. The good news is that you have relatively inexpensive brakes. The bad news is that it's just a bit fiddly to get the springs in properly to get the tension you want.

Chris H's answer pretty much nailed it, but I'd like to add an answer to capture useful points made in the comments.

The job turned out to be really simple and the only tools needed were an allen key and a piece of old pipe. I tried getting penetrating oil into the bush without taking off the arm, but after two days it had little effect so I had to take the arm off.

As Chris said, the bolt was really, really tight. In the end I put a piece of pipe over the end of the allen key and the extra leverage did the trick. Getting the arm off the pivot was a bit hard, but I just wiggled it to and fro whilst pulling for about five minutes and it eventually came off. It didn't any great force, just a lot of patience.

On my bike the spring is secured to the back of the arm so nothing dropped off or came apart when I took the arm off.

Compton warned me to check which of the three holes the spring was attached to, but of course the spring came free before I could check. However it was obvious which hole the pin on the spring needed to go in as trying the other two holes made the spring tension obviously wrong.

And that's all there was to it. I rubbed the pivot clean with some wire wool. I didn't have a tool to get at the inside of the bush in the arm so I just pulled a cloth through it to clean it as much as I could. I put a small amount of lithium grease on the pivot, refitted them and it now works perfectly.