Why did Shimano name them V Brakes?

Why did Shimano name and trademark their variety of direct pull brakes: V-Brakes®? 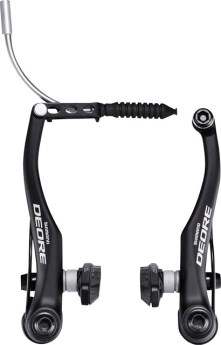 Is it because of shape? The two arms look kind of like a V? That seems a fail as they are more parallel than most cantilever brakes, which are much more V-ish.

Is it because there were earlier series: I, II, III, IV, and finally V brakes?

Apparently they were invented by a guy called Florian Wiesmann who called his brakes "Wies-brakes", which sounds a lot like "V brakes" to an English speaker. 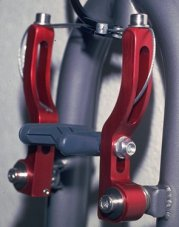 Apart from the centred brake cable attachment, that's very much like a modern V brake. By 1996 he had something you'd look at and swear it was a slightly fancy-looking V brake clone, and that seems to be the year Shimano introduced the V brake.

In 1991 Ben Capron was also selling his Marinovative V brake that also looks just like a modern V brake. IRD also began selling their Widget brake. So "who invented the V brake" is a complex question and it may well have been a parallel discovery.

Mombat say on a link I got from Google cache because the page doesn't appear to exist now:

[IRD] Developed the Widget brake, because they needed a brake that could mount to the rear swing arm. This and the Marinovative Brake are the progenitor to today's V-brakes.

Not the answer you're looking for? Browse other questions tagged brakes shimano history trivia or ask your own question.

0
What are simplest rideable bikes over history?
4
Can I damage my brakes by testing them vigorously?
1
How do you tighten Shimano disc brakes?
1
Adjusting Shimano STI Brakes
7
Why/how did flat bars take over?
3
Why did Shimano eliminate the B tension spring on the latest rear derailleurs?
3
Shimano GRX lever with cantilever brakes
8
What is the heritage behind Shimano groupset names?
3
Problem bleeding Shimano XT brakes