Feasibiliy of KERS for bicycles 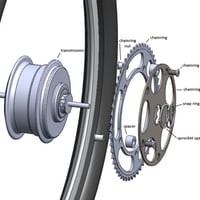 I want to know more about KERS for bicycles... I have a question. What will happen if we attach the flywheel on front wheel? Does it make any difference? Please reply me.. I preparing this as my minor project of M.E 6th sem... Please provide some guidence...

I take it KERS is "Kinetic Energy Recovery System" which takes energy from your momentum and stores it temporarily, also offering a braking effect. With the intention to use this stored energy for subsequent acceleration.

A spinning flywheel on the front wheel may have significant precession effects when spun up. If the rider tries to turn left or right, and the flywheel is co-planar with the rim, then the wheel will experience a rotational force around the long axis of the bike.

In short the front wheel will try and lie on its side.

This would prove dangerous if unexpected by the rider, and the scale of the force would vary with how much rotational energy the flywheel has stored.

A flywheel on the back wheel would experience similar forces on cornering, but the back wheel follows the turn rather than being moved to create the turn.

Downsides to a rear KERS, the wheel is already busy with drive, and often has disk brakes too. Adding something inside the rear wheel will increase the weight where we don't want it, and rear wheel braking is the least useful sort of braking.

Not the answer you're looking for? Browse other questions tagged design hypothetical or ask your own question.

5
Dynamic stability of a tricycle
16
What freewheel mechanism designs are used in bicycles?
7
What is the function of these 'bulges' on the frame?
23
Why are male and female model bicycles different in the between-legs part?