I have a 100x15 front 142x12 rear cyclocross frame. I'm considering getting mid range wheels with quick releases that come with thru axle adapters. The wheels are lighter and better than most options in this price range that come with native thru axles.

Question is, are there any negatives for using qr->TA adapter besides weight?

The wheels in question from crc http://www.chainreactioncycles.com/prime-race-disc-road-wheelset-2017/rp-prod142942

This is a deceptively complex question because it touches on many aspects of hub design, and answering it properly would also require taking some kind of survey of what design choices have wound up getting made for the various convertible vs. dedicated size through axle hubs, particularly in terms of what bearing sizes are used. Furthermore, for practical purposes the story is quite different for convertible road vs. mountain front hubs, because within mountain many of those hubs use bearings with a 20mm ID so they cover 20mm all the way down to QR, whereas the size variance involved with a 15mm/12mm/QR hub is much less.

But, broadly speaking, the main potential downside to convertible hubs of this style is that even if you're fine with it being as big and heavy as it needs to be to have good bearing durability, the person who designed it might not see things that way. They'll probably see it instead at some level as a trade-off that has to be made. And while usually in practice that may only make a marginal difference (I don't think I've met any convertible hubs with extraordinarily teensy bearings), the bike industry is quite good at occasionally turning out products that shave grams in unfortunate ways, on things like bearings and spokes where a little weight spent goes a long way towards durability.

Again, this applies more to fronts than rears, because the variance in axle size is so much greater. I doubt it applies to rears much at all, but determining that is where the aforementioned survey of bearing choices used across hubs would come in handy.

Some companies (I'm thinking of White with their Venti front hub, but there are others) have wisely taken the pressure off to make compromises here by making the 20mm in their lineup a dedicated design, and the others convertible. That makes even more sense now that 20 is firmly DH/FR, where there are going to be other aspects of the design you want more usage-specific, but for a while it wouldn't have been as easy a choice because before 15 came out, 20 was seeing use on trail and even XC bikes.

Another aspect is cost, particularly when there's a rear hub like the one in question involved. The endcaps and axles cumulatively make a pretty big pile of precision machined parts you're paying for but maybe only using some of. Not a huge deal, especially if you're going to actually use the convertibility, but for example with Novatec hubs like these being high quality Taiwanese stuff, you are paying something for the extra parts, and what's really going on is if you're buying a wheelset/hubset that just comes with all the conversion parts, you're paying for a manufacturer's decision to simplify things by just giving everyone everything and letting the costs tick up accordingly. (When a bike brand or wheel manufacturer orders hubs from hub manufacturers, it's entirely up to the buyer whether to get the extra conversion hardware. Hub makers most commonly wouldn't be sending all that stuff out since most of their hubs wind up OEM on bikes.)

In cases where a hub is convertible across axle standards where one reason for the new standard was to change hub geometry to create a strength increase, such as hubs that can work on both 12x142 and Boost 148, you get none of the advantages of the new standard.

Finally, it only gets harder to create effective sealing when you're designing around multiple different axle adapters that might be used. That doesn't necessarily mean sealing will be deficient, but it is at some level a downside.

To be clear, there are no major categorical downsides to hubs like this. A lot of them are out in the world performing very well. But there are subtle downsides that get incurred as a result of adding more factors to the design criteria.

I suspect those wheels will have all the normal benefits of a QR but with the adapters will not have any of the benefits of a through axle.

So the adapters will allow you to use a QR wheel on a through-axle frame, but will not give you the same level of stiffness that a single thread-in through axle would give.

In the end, this wheel still has a QR skewer through the middle, regardless of what adapters are on it. That might be fine - QRs work great on many bikes. But its not a TA wheel hub and never will be.

After looking more closely at the photos, it looks like the specific hubs/wheels in question are the Prime Comp Alloy Clincher Disc Road Wheelset seen here. These have Prime RD020 Disc Hubs - front and rear. Looking closely, it doesn't seem as though these are rebranded novatec hubs, but they do seem to utilize a very similar end cap design.

For the front, it looks as though the end caps pop in: 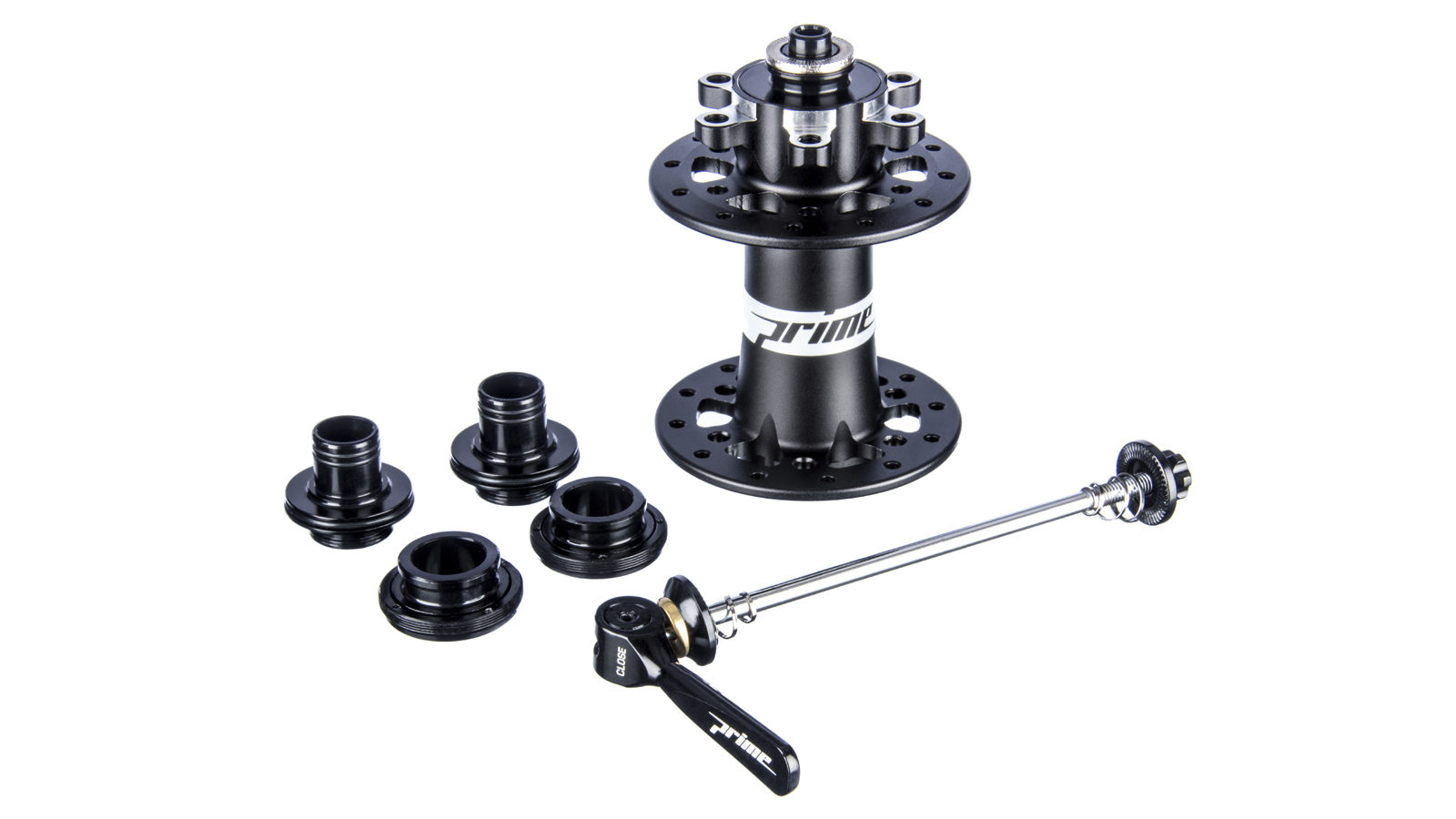 for thru axles, the axle is separate and should be included with your frame, the end caps simply provide the mating surface to the frame/axle. 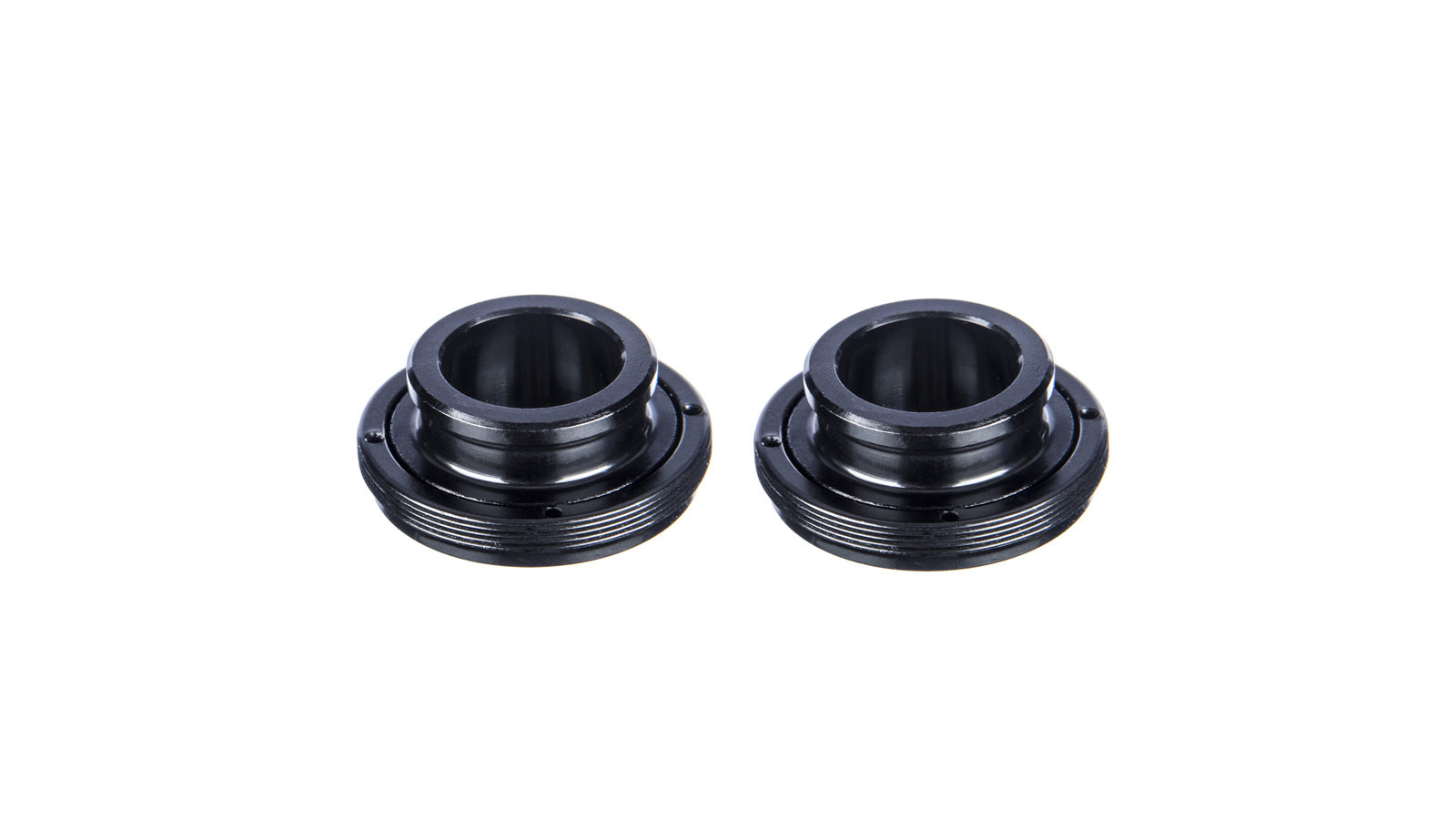 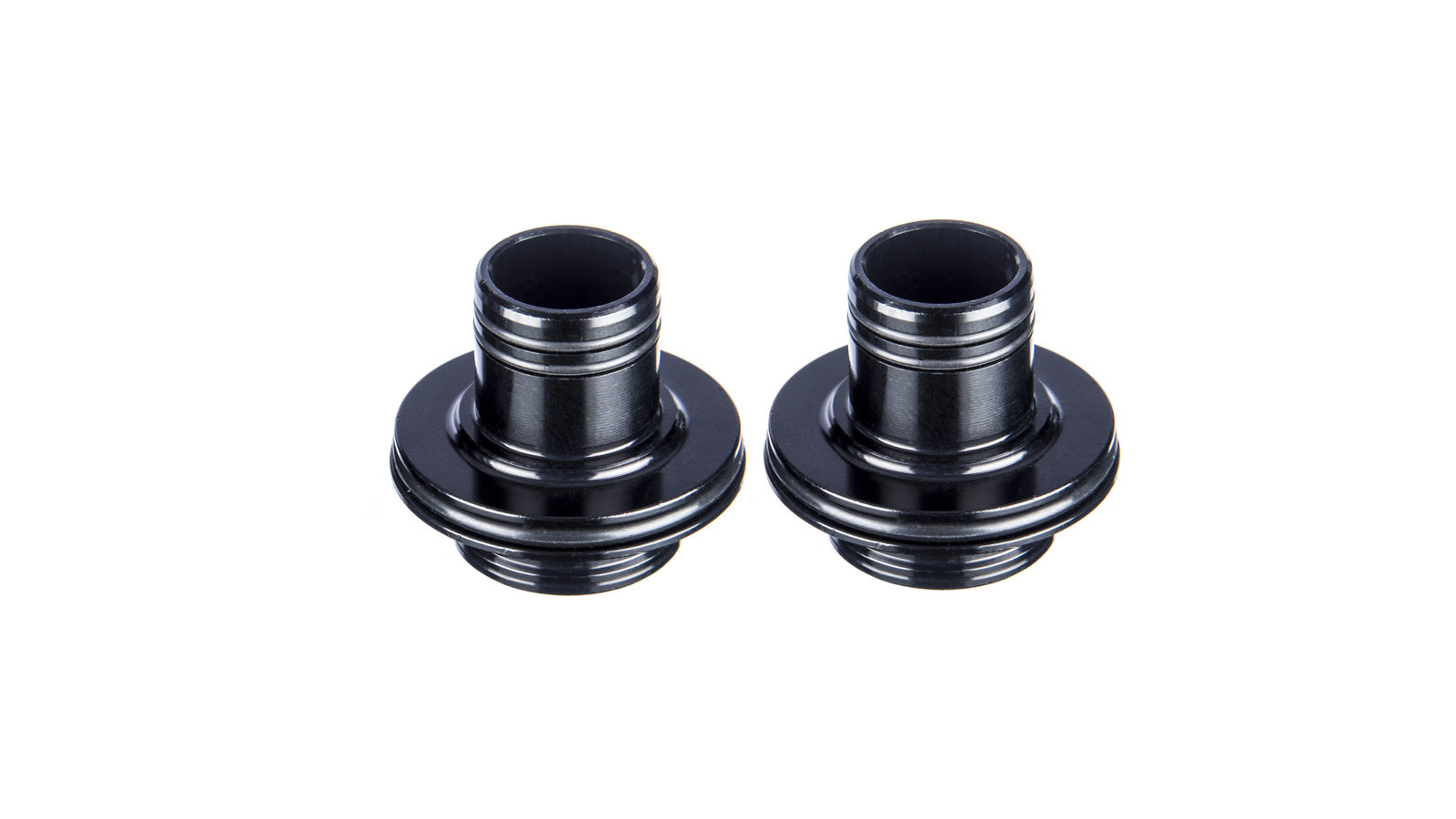 These caps are something that simply 'fills the gap' between an oversize bearing inside the hub and the desired axle.

On these particular hubs, the rear seems to operate somewhat differently. The drive side end cap appears to thread onto an oversize axle (to set preload?). I believe that the axle itself functions as the mating surface for the non drive side of the hub. 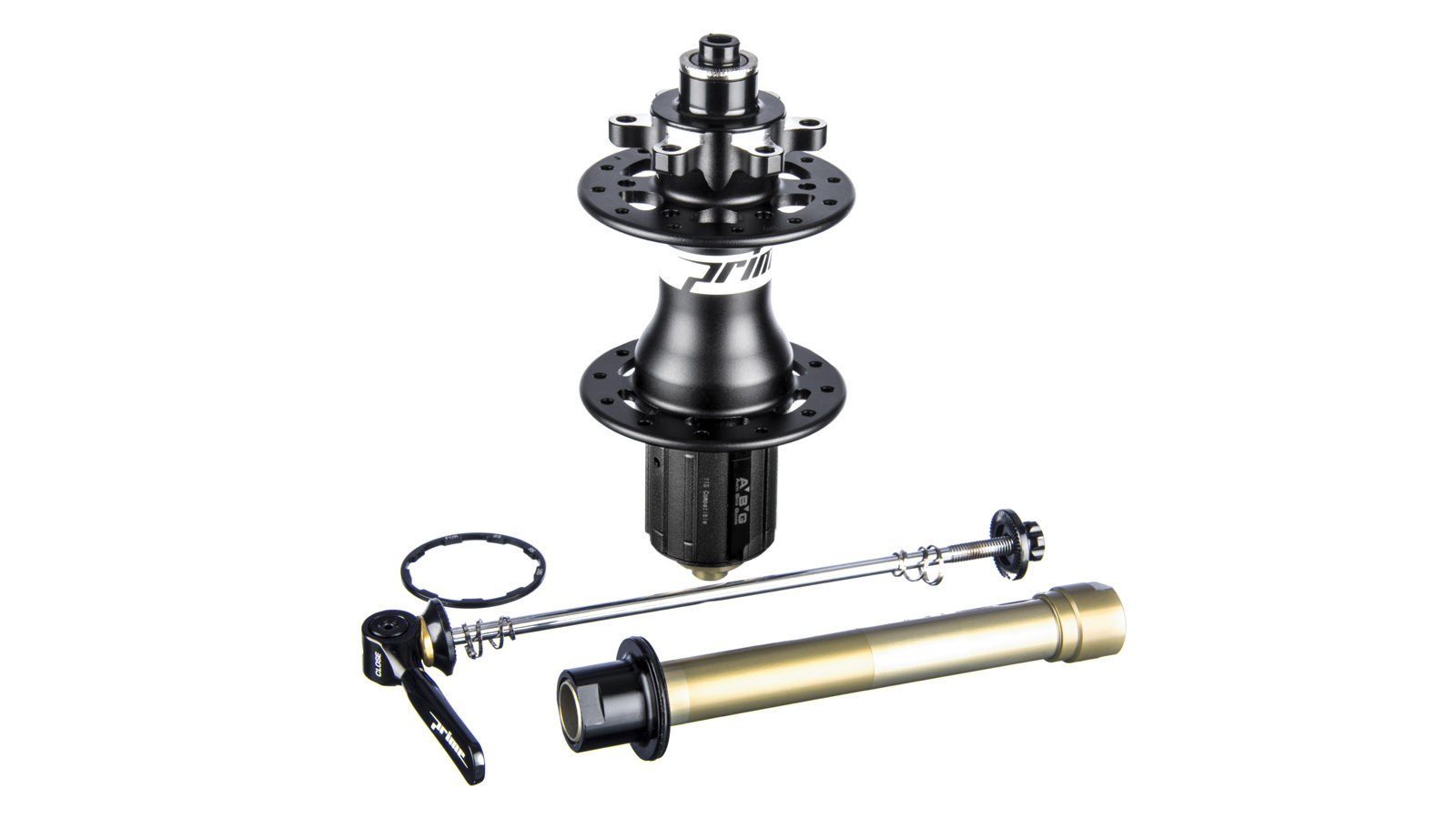 Hub in QR 130x10 configuration with all included parts 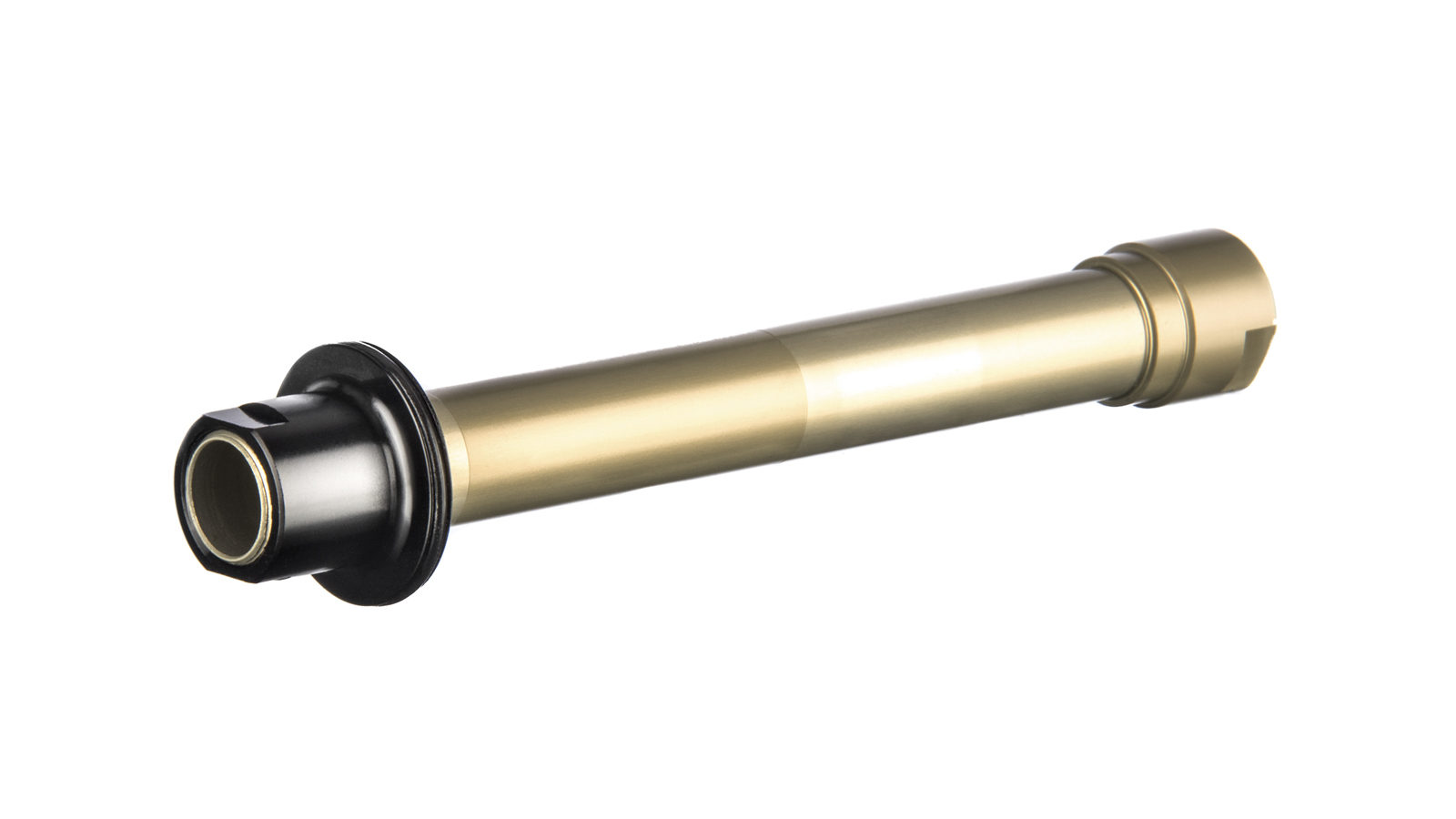 Excuse the question marks, but Prime is pretty sparse on details. It appears to be very similar to Novatec's configuration, which is shown in full here and is where I drew some inferences: 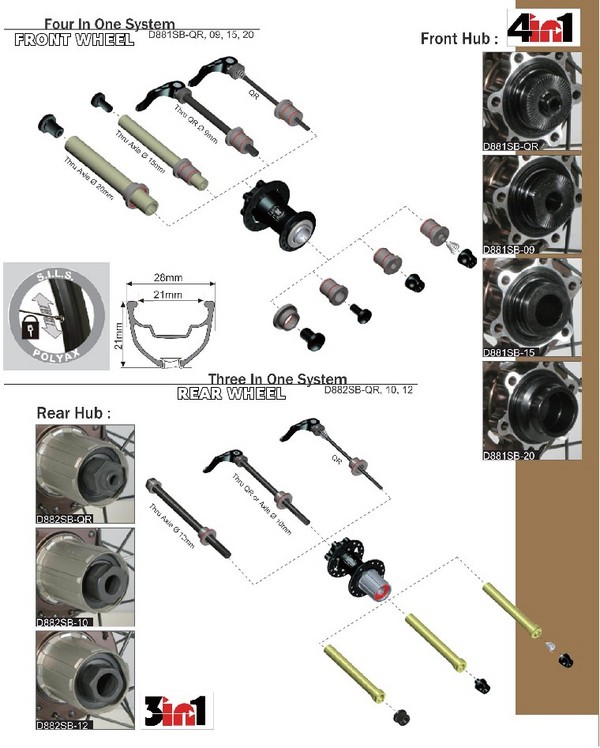 refer to the lower half for the rear hub, although Prime never pictures any non drive side end caps. I do not believe this particular front hub works as pictured here.

Many companies are doing something similar now, all with their own little spin of course. They make a hub with oversized bearings that create some physical limit as to the maximum axle size, and then use caps to effectively shim the interior diameter and determine the final spacing of the hub.

SRAM recently introduced their roam/rise/rail wheels which utilize end caps that pop in. SRAM also has some proprietary end caps for the front called torque caps that increase surface contact for increased stiffness (they claim).

A nice blog post here that describes the process of changing the hub to a different axle standard. A few photos from the post: 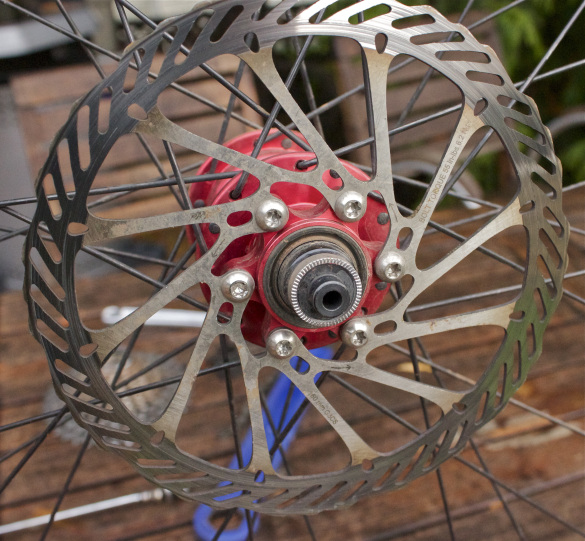 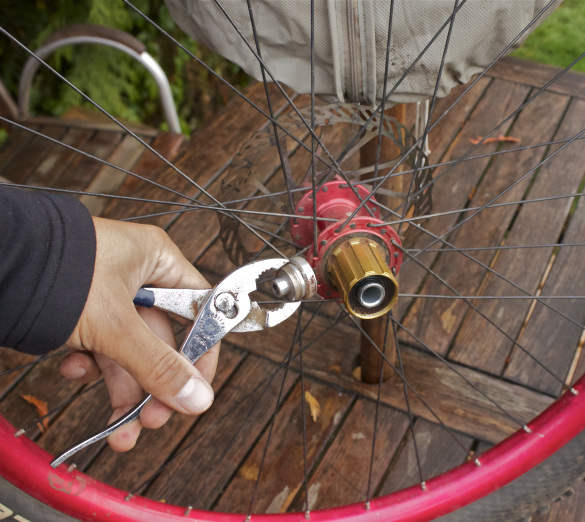 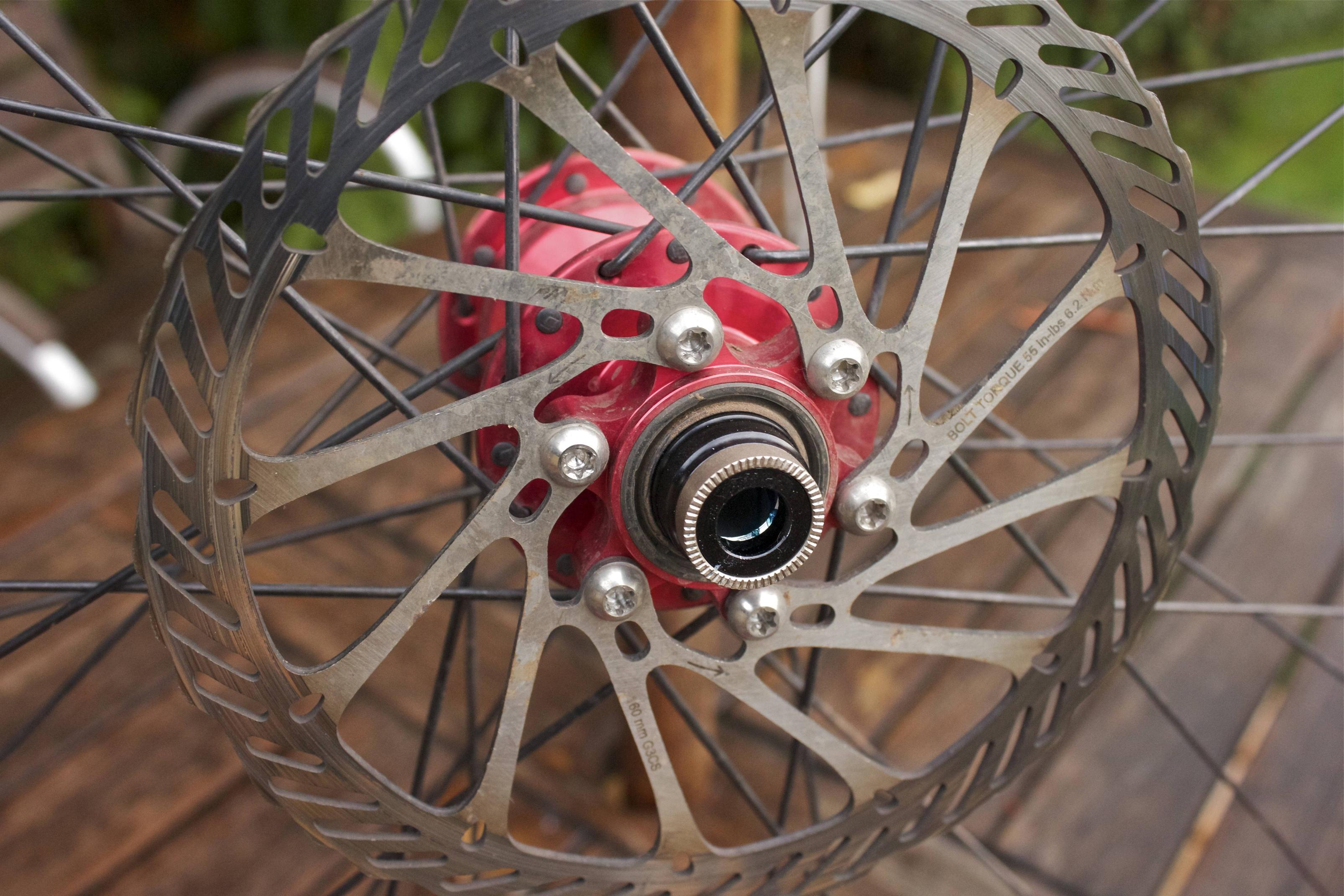 Not the answer you're looking for? Browse other questions tagged wheels cyclocross shopping performance or ask your own question.