Due to some issues with my dynamo I am also checking the possibility of installing batteries powered lights.

While checking in a shop, together with the usual LED stuff, I noticed a front light having the indication of "4 lux" on the package. See below info taken from manufacturer web site.

The AXA Scope is a standard LED battery headlight with a light output of 4 lux and 2 bright LED's, very suitable for children's or city bukes.

The integrated retro reflector makes sure you are better visible to oncoming traffic.

Is that enough, poor or what? I usually cycle on roads with public illumination on, but sometimes I also ride across parks where the only light is that cast from stars and Moon.

Out of curiosity after the detailed answer received, I decided to try the LED above mentioned (the shop allows returning within 30 days) in real conditions. So I took it home and tried it early this morning in my dark garden from a standing position (I didn't want to go through the hassle of mounting it on the bike).

Conclusions: it seems better than the LED torch I am using now as a workaround and comparable with the dynamo powered light I used to have, but I think I will opt for a new dynamo. It will at least saves my money on the long run: if I have to trust their claim on 50 hours autonomy I should swap batteries once a month.

You can't directly convert because you need the distance and beam angle. Lumen is a measure of output while lux is how much light is falling on an object. 5 lux is very dim indeed, less than a sliver of moonlight on a dark street.

I should ask, though, are you sure it said lux and not lumens? If it's a single led run from AAA or CR2032 batteries, then you're most likely looking at maybe about 5 lumens.

This would be an example of a light driven by CR2032 watch batteries that would illuminate at around 5 lux at a diffuse 15 meters. Essentially worthless as a bike light but it is better than nothing in terms of preventing cars from running you over. 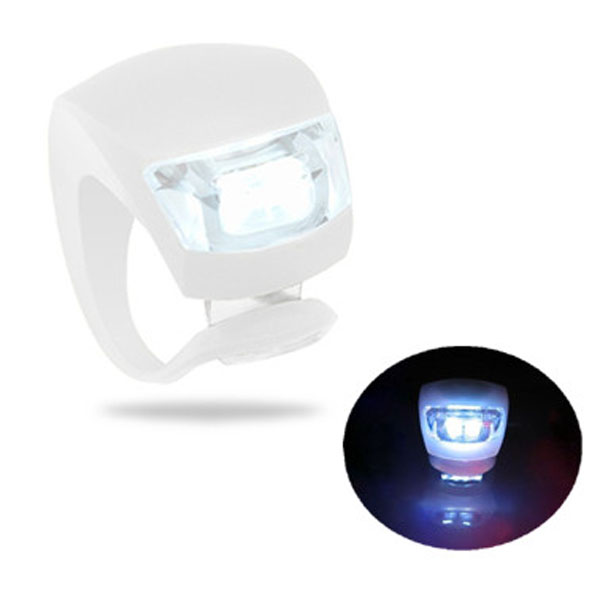 Update: You included the advertising copy for the light which indeed said it had "4 lux" and "2 bright LEDs." Obviously, the person who wrote the blurb doesn't know what they're talking about since not only is lux is the amount of light falling on an object and is a function of distance, output, and output angle but 4 lux is below moonlight in terms of level of illuminance. So yes, that light would be about the same as the little light I linked above -- just two 5mm LEDs and fairly worthless -- or even worse than worthless as @David Richerby points out, if it gives you a false sense of security. You should think of it as a glorified front reflector rather than as a light.

One way to look at how bright a light is, is to see its running time. LEDs are extremely efficient -- and getting even better -- but their running times still does give a gauge to how bright they are. Your light is advertised as running for 50 hours on 3 AAs. Assuming they are alkaline AAs, that is roughly 2000 mAh at 4.5 volts. So that would be 2000 mAh / 50 hours = 40 milliamperes @ 4.5v. That's enough to drive the two 5mm LEDs very dimly @ 20 mA each. This is a typical LED that would be driven at that current:

We finally get a useful spec. 17,000 mcd. Plugging that into a lumens calculator, we get a smashing 3.6 lumens. With two LEDs, we get 7.2 lumens total. This is with fresh batteries, the light is unlikely to have a booster circuit so it will get dimmer as the battery capacity diminishes.

Rant: Note that manufacturers (especially Chinese no-name ones found on TaoBao or Amazon) are notorious for fake lumen ratings. A "1000 lumen" flashlight is often just 200 lumens in real life. The best way to figure out what the flashlight is really putting out is to go to a good review site that measures the lumens independently. I like Bike Light Database but there are others.
Share
Improve this answer
edited Jan 26, 2017 at 20:47

Not the answer you're looking for? Browse other questions tagged headlights or ask your own question.