Can anyone help me identify the model of this bike and possibly give me a time period in which it might have been made? I am considering buying it for a total of $350 with riding shoes in my size, a helmet, and a stationary stand for it. I know nothing about road cycling but am looking to get into it and from what I can tell Eddy Merckx is a great brand with a few exceptions. He says they components, pedals, and shoes are shimano. Apologies for the poor pictures they were all he had. I have not seen the bike in person yet and am a bit concerned that it is disassembled, is there anything in particular I should look for? Thanks 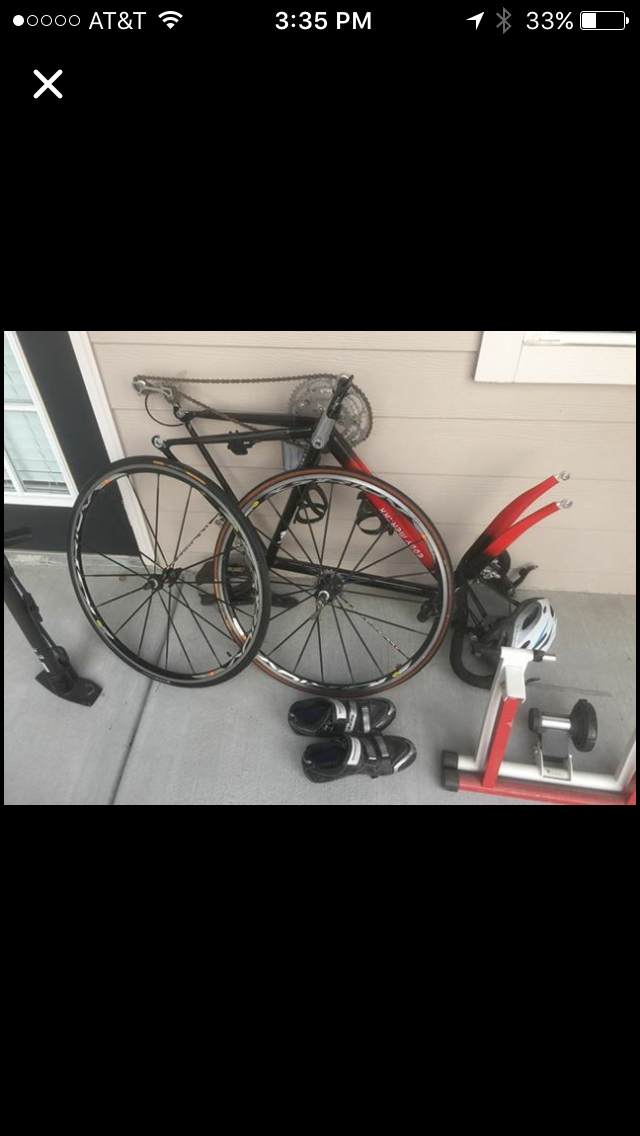 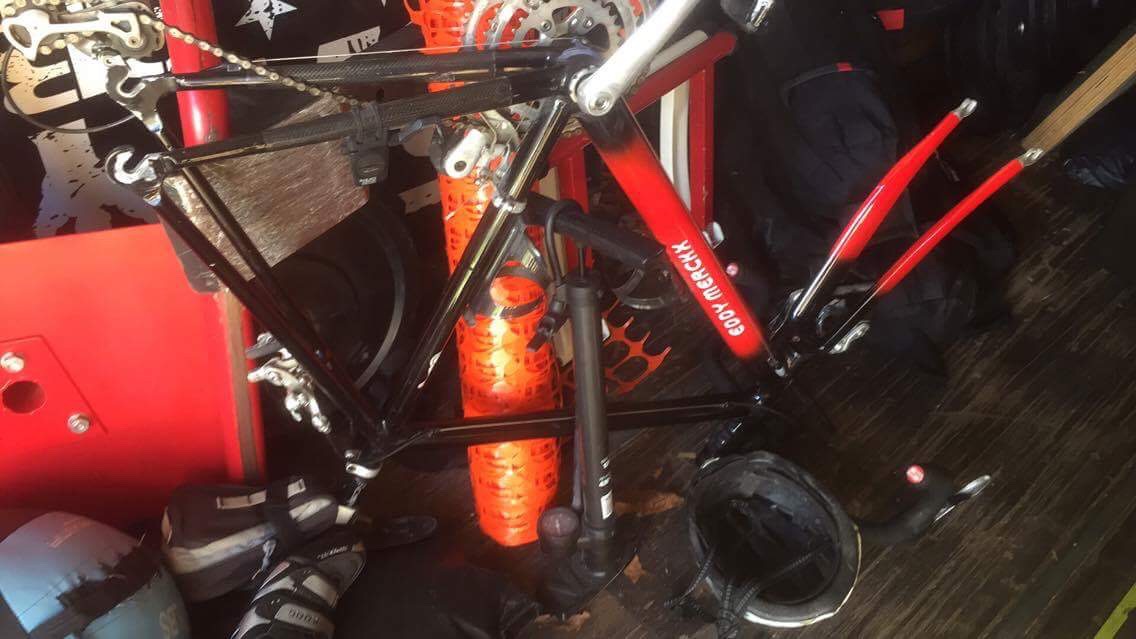 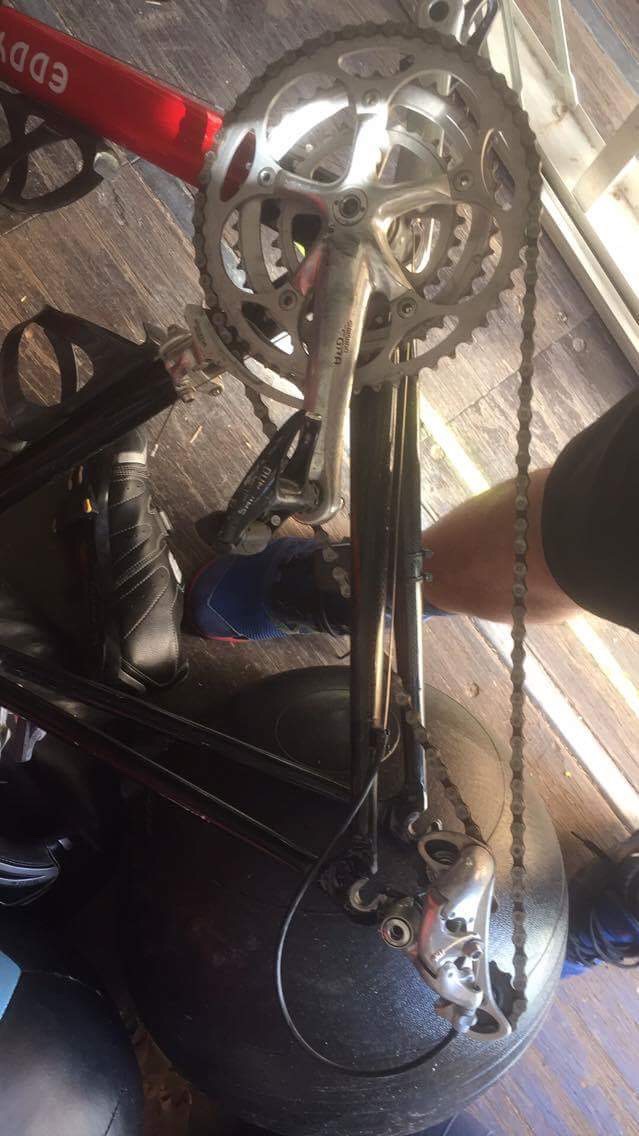 Below is a list of serial numbers and descriptions for a variety of Eddy Merckx steel frames.

Serials are of the form --. When looking at the bottom bracket, with the frame vertical and the headtube at the top, read this as upper left, lower left, lower right, upper right. Sort of a U shape. Why? Because it sets a standard way for me to record this info, no other reason.

Only when either a frame has been date verified by Gitabike or the Merckx factory do I add a verified model year. Model year bikes are begun production the year before, and as such its possible for their date code to be somewhat different than what the pattern suggests

The left side of the serial gives model and (sometimes) size information. Sometimes there are some other letters I haven't deciphered. But here's the general gist

On frames prior to, roughly, 1986, the M probably denotes a multisport or other model, and does not necessarily denote a Strada. If there's a Columbus SL style sticker on there (either no tubing type mentioned, or an SL), then its probably not a Strada - which will have either a Strada or possibly a Cromor decal, depending on the year.

Sometimes things don't match up -- there are multiple Corsa Extras marked with an H, for instance. Things to figure out as the sample space gets larger. Originally, I thought an S designated a Grand Prix (made of Seven-fifty-three tubing), but has shown up on a variety of other frames clearly labeled as other models.

The left side number will give the last digit of the frame size. C5, for instance, would be a 55cm Corsa. On some frames, this might show up as 5C, but it means the same.

The right side of the serial is less easily defined. The numeric portion seems to be at least semi-linear. The two identical Grand Prix differ by 1. Other frames from the 88/89/90 time frame show numeric portions radically different. Its possible the number portion is sane for a given model type.

The final letter, however, seems to be at least a somewhat reasonable marker for timeframe. Its possible that the letter corresponds to the catalog which the model comes from -- Merckx didn't necessarily issue a new catalog for every year, so the letter may indicate the catalog year to which the model is designed.

In general, the letters from 1986/87 and on seem to follow a somewhat recognizable pattern. 84/85, part of 86 maybe, also seem semi consistent:

Some bikes seem to slightly predate or post date the range. These may be bikes manufactured to the new specs in the year prior to the model year -- Gitabike indicates, for example, the Grand Prix's in the list to be 89 model year, while a 10th anniversary TSX frame also carries the B. Might be a late 89 build?

This list is (roughly) in the order that they were probably produced, based on the letter, claimed date, as well as look + model. As earlier frames seem less likely to follow a pattern, I've placed them first. At some point I'll make tables that break out by frame-type, where identifiable or strongly guessable.

I'd also recommend reading this blog post I wrote about using frame details for dating. As in, figuring out what time frame a frame is from. Last thing I need is for the wife to have written evidence suggesting I take the bikes out more than her.

Something else worth taking a peek at is a series of blog posts I did for team color schemes. Merckx has sponsored a slew of teams over the years, in a variety of liveries.

Full table is at the link quoted above.

Ask from whom or where he purchased it. Have him send you a pic of the serial number stamped on the frame, below the bottom bracket. In the current position, it's quite easy, he just needs to look & point straight down. Locating a shop near him selling Eddy's is likely to have records. If not, contact the company or Certified Regional Dealer. All rides are stamped! As said, have a professional examine it if you purchase, but make sure they examine the helmet too! It only takes a second and might be very important later! Good luck & sweet ride! Re the taken apart bit, it's not a biggie, just place the QRs straight and make sure the wheel is centred; and need to adjust the rear a wee bit,, but these are easily remedied. Of course, a Shop will handle that as well, plus adjusting/making the wheels true etc.