A two successive wheel trailer ; would it work? (followme-tandem)

TL;DR Why does the followme-tandem have the kids front wheel off the ground?

I'm looking into the followme-tandem, which attaches a child's bicyle to the back of an adult's bike to make a trailer-bike. The child's front wheel is elevated from ground. I deduce from the manual that the connection swivels up-down around the adult's rear axis and left-right around a joint between the bikes.

I'm wondering why the product is designed to raise the front wheel in the air?

Would the bikes be difficult to ride if also the kid's front wheel would touch ground?

(The reason I ask is: I doubt I could support the extra weight in addition to the child seat and panniers I'm already carrying on my rack. So, could I not set up the follow-me so that the front wheel is in contact with ground, thus not needing vertical support?)

EDIT: Answer to my specific problem: There is no need to worry about supporting the extra weight. As long as the tandem is connected directly onto the axis of the parent's bike, the trailer produces no torque around the back axis! The weight goes directly to the wheel.

The follow-me tandem lifts the front wheel of the child's cycle off the ground because that's the only way to have stable handling on corners.

I made some primitive drawings to explain. Note that in these simplified drawings, the radius of the curve is exaggerated.

When the two bicycles are going in a straight line, it would be fine if there were four wheels touching the ground. The connection has to be rigid otherwise when the parent brakes, the child would ram into them.

Once you get to a corner, if the connection were rigid and the child's steering were locked out -- the front wheel doesn't have enough traction to actually force the turn. The three tracked rear wheels would force the front wheel to skid before it could make the bike turn. You also can't lean into the turn because of the three rear wheels.

But say the front wheel had infinite grip and the parent infinite strength -- the only way the rear would turn would be for the rear tires to lose grip, whipping the child around and maybe off the bike.

If the connection were rigid and the child's steering wasn't locked out, it would look like this when traveling at speed. The parent's rear wheel is likely losing traction and skidding laterally at this point: 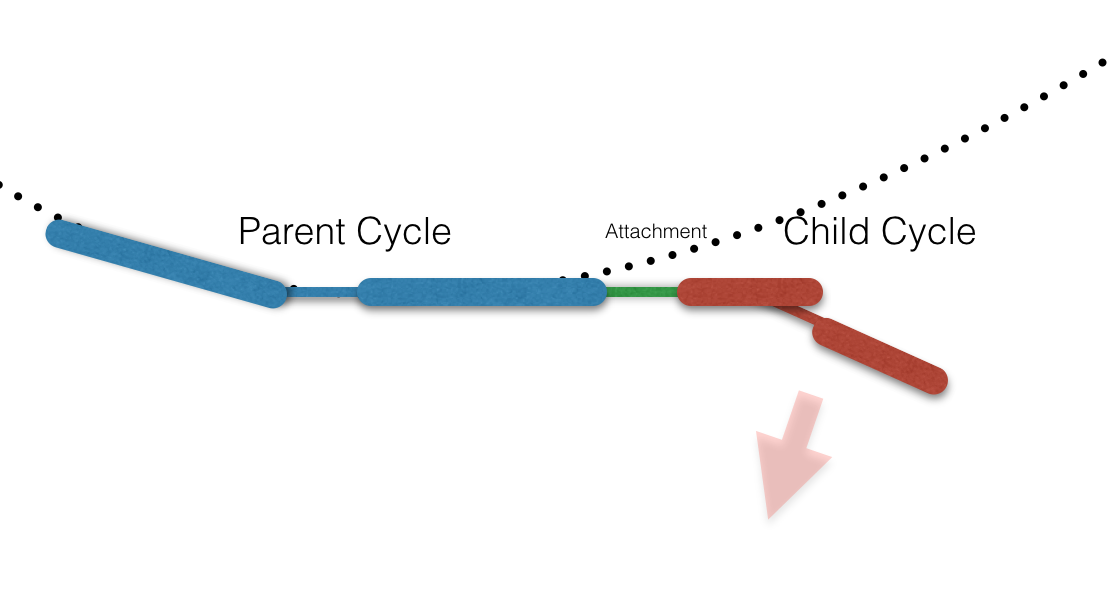 What would happen if the child's front wheel wasn't locked to the trailer attachment? Again centrifugal force would make the trailer act like a giant whip, jackknifing, and throwing the child off. Note the magnitude of the centrifugal forces acting on the rear bicycle would be greater than even the strongest of superlemur children and they would not be able to hold the handlebars straight to force the rear into alignment.

What happens if we have a hinged attachment but lock out the child's steering? Here, it would work but there's a lot of lateral force acting on the front tire of the child's cycle going around corners because it can't track properly. The worst case scenario is that it would actually roll the tire off of the wheel rim. The front wheel would eat the tube, lock, and the child would break their face on their handlebars. Not good childrearing practice.

Followme's design: By putting a hinge in the trailer attachment and by lifting up the front wheel, the bikes track properly. In my diagram, the child's green front wheel indicates that it's part of the trailer attachment and is now locked in position. There is still some centrifugal force (as with all trailers) trying to cause a jackknife but it is relatively manageable as long as the parent doesn't try to corner and brake hard at the same time (bad parent!).

Fine print: Images copyright by robokaren, cc-by-sa. And yes, I know that centrifugal force does not actually exist, but is a fictitious inertial force. However, it's still handy when explaining things to lay people. And yes, lemur children do have much grippier hands and feet than human children.

3
Why is the rear wheel of my tandem bike skidding?
47
Toddler bike seat vs. bike trailer?
6
timing chain keeps dropping/derailing only with partner
4
Bicycle trailer wheel size
5
Camber angle on a two-wheel trailer?
3
Can I convert Kiddicarrier jogger to a bike trailer?
1
Would a swivel wheel trailer work with a bicycle?
1
Bicycle Trailer Hitch Design Considerations
4
Is there a specific type of trailer arm I could use to tow my garden trailer?