I noticed on the largest sprocket of my SRAM Red cassette, after every 8th tooth, the tooth is missing. I looked at one on line and noticed the same thing. What is the purpose of not including these three teeth on the sprocket? 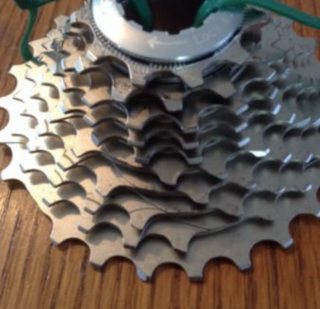 In general, when you see oddly shaped teeth or variations on a cassette/chainring, its there to facilitate shifting (such as Shimano Hyperglide, and ramps/pins you see on chainrings/cassettes; see this link for some examples).

In this case, SRAM calls it their "Open Glide" technology. To quote them: "OpenGlide tooth ramping allows for faster chain transition between cog postions. We employ OG on the radical OG1090 cassette for sure and higher shift speeds."

And here is a figure SRAM provides:

The marketing blurb from Art's Cyclery says: "SRAM's open glide technology refers to the shift gates created by removing teeth at key spots on the cogs to facilitate fast, effortless shifting going up or down or under power."

Whether it actually shifts better or not is a matter of debate, but a quick search says that generally not. I'd guess SRAM also found that to be the case, because they don't do this on cassettes in their current product line.

Not the answer you're looking for? Browse other questions tagged cassette sram or ask your own question.