I'm looking at getting a front rack for my Kona Dewey 2015, which has two sets of mounting points on the forks. Specifically looking at getting the Giant Rack It front rack (https://www.giant-bicycles.com/gb/giant-rack-it-front-rack-black) mainly because it's cheap (~£20) and looks okay. Does anyone have any experience with this particular rack?

Also, unsure what the benefits/disadvantages of bow vs. bow-free racks are (ie that arch of metal that connects the two sides of the rack) as seen in comparing the Tubus Tara vs Tubus Duo for instance. What is the benefit of the bow? Examples here: http://bikeshed.johnhoogstrate.nl/bicycle/rack/low_rider_comparison/ 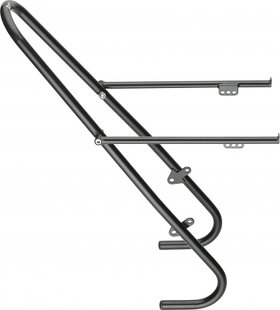 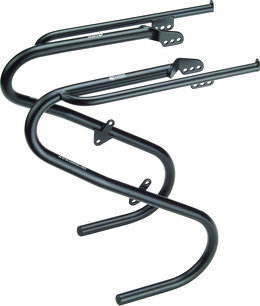 Stability of load will likely be quite different between the Tubus and giant racks.

For the Tubus racks the Tara had a cross brace to help stabilize the load. The Tubus duo does not, but if you look carefully it mounts to both the inside and the outside of the mid fork eyelets, while the Tara mounts only to the outside. This adds stability lost by not having a cross brace. Note however that most forks today only have the outside midpoint eyelet (cost), so the Tubus Duo is not compatible with many bikes, which is why the Tara is their most popular model.

So why does the Dou even exist? Tire clearance. You can run massive tires without worrying about rubbing the cross brace. In terms of performance I have used both racks and couldn't tell any difference between Tubus models in terms of stability.

Now this gets us to the Giant rack. From the picture it appears to only mounts to the outside of the fork and has no cross bracing. As such, it will have worse load stability compared to the Tubus models. If you are only running a light load, then it probably won't matter. If you want to run a heavier load, but want to try and maintain steering responsiveness, then look for a low rider with cross bracing. Note however that both manufacturers rate their racks as having the same max capacity.

I've just bought a Giant front rack and have fitted it without too much difficulty. I had to slightly bend it to fit my (Giant) Revolt Advanced, but only slightly so no problem. I had to find a bolt with a smaller head to get it to clear the front wheel release, but that's worked ok. (Otherwise I'd have to take the rack off every time I removed the wheel) As to the cross brace, which the Giant doesn't have, I have an old one from my previous front rack so I just cut it to size and epoxy'd it on. The mudguard stays now attach to the upper bolt position on the rack.

Not the answer you're looking for? Browse other questions tagged fork rack giant or ask your own question.