I'm a commuter cyclist who didn't for the last 18 months really do anything to take care of his bike - though it was stored inside between rides. Took it to the shop 12 months in for a service, but otherwise just pumped up the tyres periodically. This was not very clever, I appreciate.

Having decided to start taking my bike a bit more seriously I decided to start by replacing the chain. My old chain was rusted all over and made a slight grinding sound as I pedalled, so I imagined it was slowing me down by not transferring my pedalling to the wheels as well as it could.

Over the weekend I (eventually) managed to replace the chain with a new one, thanks to Youtube. The new chain is exactly as many links as the old chain: I counted.

But now I could swear I am cycling slower, and my legs hurting more at the same speeds, than before. I'm also commuting to work a few minutes slower than last week. My bike isn't skipping gears, but it is making a noticeable rattling or sliding sound as I pedal (and not when I freewheel down hills). It also occasionally slips, though not much.

Have I somehow made my transmission less efficient? Or am I just going crazy? And if it's the former, does anyone have an idea for what the problem might be? Some Googling has suggested the cassette might need replacing too, but the fact I am changing gears fine makes me think that isn't the case.

Many thanks in advance, Q

EDIT: While trying to implement the suggestions below I found the real problem, which would have been obvious if I'd uploaded photos. I'd threaded the chain wrongly through the deraileur. See attached photo, with the blue line showing the path the chain used to take (I've since rethreaded it properly).

My chain is still slipping under power, which I suspect is the worn cassette. I'll replace that this weekend. But the bike feels much better now and my time into work this morning (with not great traffic conditions) was 20% faster than Mon-Wed. 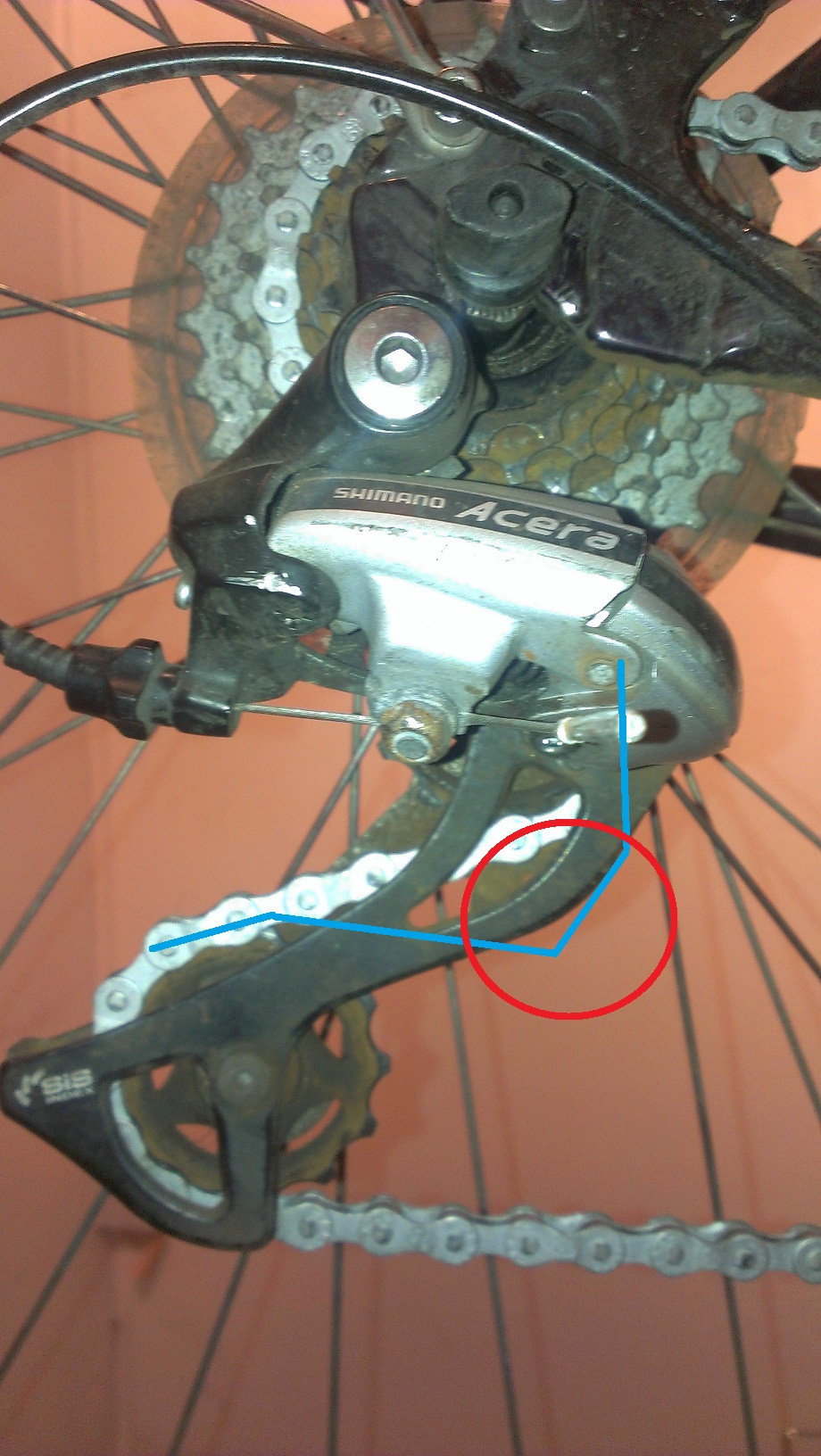 Your symptoms sound like your rear deraileur needs to be re-adjusted. If that is off you will notice the skipping and "rattling" sound as the chain rubs against the deraileur or jumps gears under various pedal pressures. That rubbing will also slow you down.

Your old chain will have stretched so counting links will not translate to an exact fit for your new chain. Your new chain will be slightly shorter and will require some re-adjustments to your rear deraileur.

Additionally, there's a few other variables that you can check/think about.

1.) New chains come with a protective grease/oil that protects the chain from cororosion. There's some debate on whether you remove this coating and add chain lube or just keep it on. I've always removed it since the viscosity is higher than my chain lube. The viscosity of the lubricant you use will affect power transfer enough for you to notice.

2.) You may not get smooth shifting at all if your cassette is worn out with your new chain. If this is the case the reason is that your old chain has worn into the cassette teeth - meaning the two fit together "perfectly". When you replace the chain, the chain no longer sits properly within the teeth. If you look at the cassette teeth and you see that they are shaped like shark teeth it's time to think about a replacement.

Not the answer you're looking for? Browse other questions tagged road-bike maintenance chain noise power or ask your own question.

2
Chain really quite stretched, should I change cassette at the same time?

11
How long should a well maintained chain last and what can I do to prolong its life?
3
Why is my drivetrain so noisy after replacing the chain?
16
How to prevent my chain from breaking?
2
Chain skipping with new chain and freewheel
1
Chain Slipping?
7
Unable to pedal when in high gears
3
Chain really noisy near front derailleur on low gears but doesn't appear to be rubbing.
4
Should I change my chain? It broke once, but its condition seems rather good
2
Chain slips/jumps occasionally (with all new parts)
4
Why does my chain make grinding noise and vibration when I put my bike on my Wahoo Kickr?