Do hardened chains cause more chainring and cassette wear?

I was reading the Sept 2016 issue of Bicycling where they were reviewing the SRAM NX series. The blurb for the SRAM chain (below) states that "The PC-1110 chain SRAM recommends for NX ... has performed its duties as well as SRAM's higher -end stuff. And because it hasn't had premium hardening treatments, it actually may be gentler on your cassette and ring than a more expensive chain." 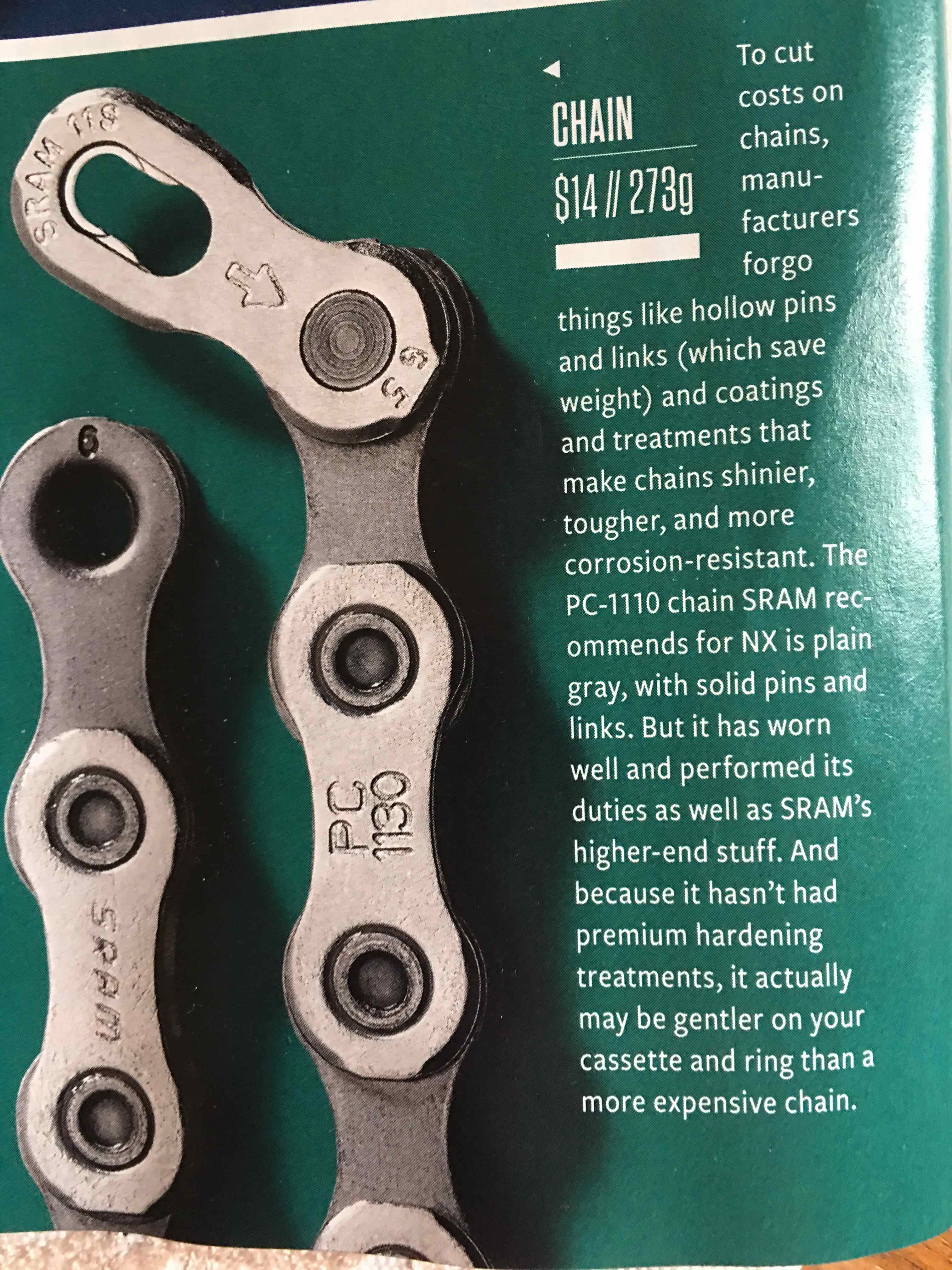 Any truth to this or is this just advertising-speak that snuck its way into the review? This is Bicycling magazine, after all.

Do hardened chains cause more wear?

There are two sides to this question, for the two places chains contact chainrings and cogs with force: the outer plates and the rollers.

There is probably a grain of truth to the statement in question regarding the hardness of outer plates. Sometimes you do see chainring ramping get worn to the point of not performing as well as a result of the rider, usually a racer, habitually shifting under load. Every once in a while you see it somewhat in advance of the teeth being worn. I don't see why this effect wouldn't be exacerbated the harder the outer links are. (That being said, I'm not sure which if any chains, expensive or not, have outer links that are any harder than other ones, since you don't really gain anything by it, and I'll bet the writer has no data on this either.)

For all the other parts of a chain - pin, roller, and inner link (or the bushing in the case of a traditional 5-piece chain) - you want it as hard as you can get it as long as the other mechanical properties (ductility being the big design counterbalance to hardness here I think) are what they need to be. That's how you get a chain that resists elongation the best and in turn keeps cogs and rings going longer, which is what most cyclists are interested in.

So basically the statement is misleading.

Hard to say without actual evidence from controlled tests. I interpret the:

...may be gentler on your cassette and ring...

as it being softer metal and hence "gentler" on your parts, but this is sort of a fallacy, as others have pointed out in the comments.

It may be gentler, but will probably cause wear faster due to stretching and the pins not being "as hard" as the hardened chain.

So if you consider this "gentle" claim and weigh it with the fact that your cassette is probably getting "shark teeth" more quickly due to a (marginally) more stretched out chain, then yes, a softer chain could be considered gentler on the parts themselves, but I would expect the drivetrain as a whole to wear faster.

This begs the question; is it actually worth it to buy the more expensive chain?

If the extra wear (or lack thereof) of the cheaper chain causes me to have to buy 2 more chains and an extra cassette per season, than I'd probably go for the better chain. But if using the cheaper chain doesn't really affect my drivetrain consumables scheduled replacement (cassette, rings, chain, pulleys, lube), then I wouldn't be inclined to spring for the more expensive chain. Weight comes into play (i.e. hollow pin) but it is so minimal that I wouldn't really consider it unless I was counting grams. (256g vs 259g for Sram PC1170 vs PC1130 ).

Not the answer you're looking for? Browse other questions tagged chain cassette wear or ask your own question.

14
Do I need to change my cassette if I can't see any wear?
4
Chainring and cassette compatible?
2
Do freewheel/cassette/chains come as a set?
4
How to choose a compatible set of chain, cassette and chainring?
5
What are some notable visual observations one can make of a cassette that indicate wear? And to what degree that wear has progressed?
4
Are more expensive chains/casettes more quiet?
3
How many chains before the cassette is replaced?
5
Wear marks on chains
10
What mechanical effect causes the requirement to replace 11 speed chains at 0.5% wear rather than 0.75%?