4 weeks ago I replaced the bottle dynamo on my bike (see this question).

Now, after 4 weeks of commuting for a total of something less than 600 km, the dynamo runner looks like this 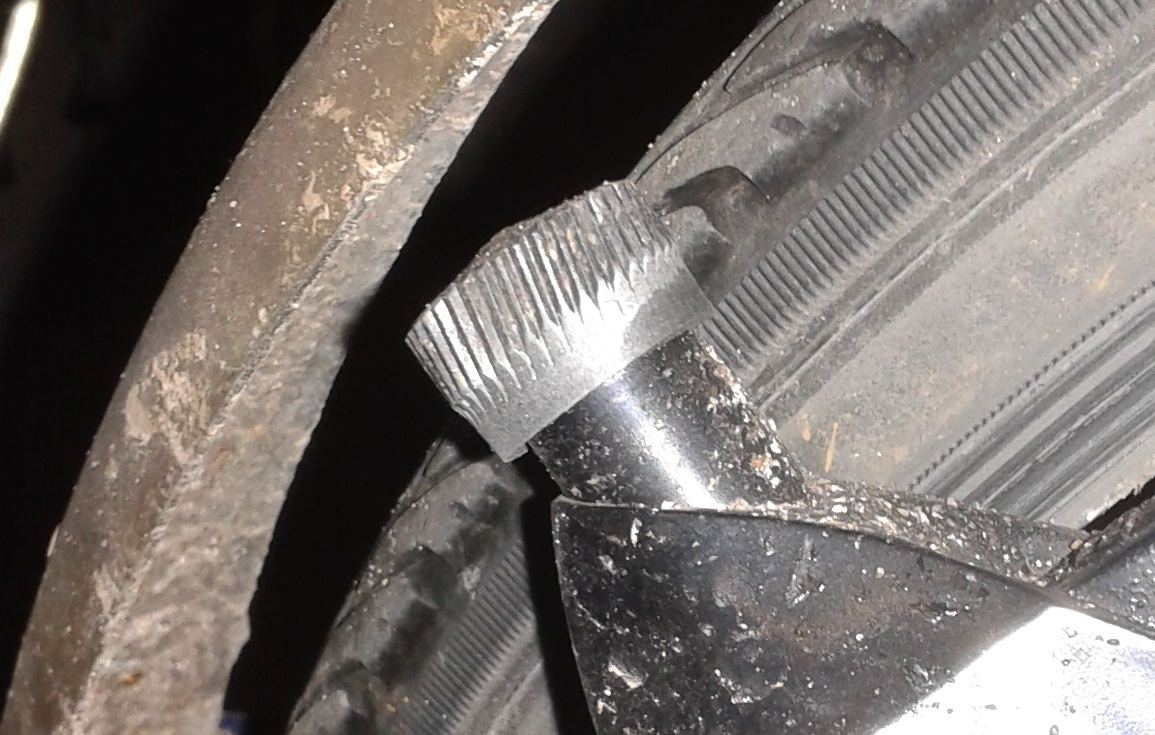 It won't take longer to have the rest of the runner completely flattened, therefore I am considering moving to a better dynamo.

I can choose between:

Aside from cost consideration, is it advisable to use a steel runner? Is there any risk that the steel runner can tear the side of my tyre?

P.S. Hub dynamo is out of question.

The roller of the dynamo should run on that ribbed track under the treads. And the axis of rotation of the rotor needs to point very precisely at the axle of the wheel. (I've always checked that with a piece of string!)

BTW: The roller doesn't look worn to me. It looks as if it had been machined that way, compare with a new one. And you may also find a rubber cap that fits over the steel roller although this will increase the diameter and make the dynamo turn at a lower RPM and dim the light in an unwanted way.

Bottle dynamos wear down -- their other name are "friction dynamos". That being said, your one does seem excessive and may be a result of your friction wheel rubbing against the high end of the tire, near the treads. This area tends to be dirtier as well as has tire treads, so this might be causing premature wear.

Since you ruled out a hub dynamo, I'd suggest instead that you try another cheap dynamo but try to make sure the friction wheel hits the tire sidewall and not the tread. Notice how the sidewall has a friction track ||||||||||| that's intended for the bottle dynamo.

To the greatest extent possible, the dynamo body and friction wheel should be parallel to the bicycle wheel when engaged. The better friction dynamos use parallelogram linkages to accomplish this, the cheaper ones a simple hinge which will mean the two wheels are always at an angle to each other, causing a hot spot and bearing wear.

As far as steel vs plastic friction wheels. It's expensive to procure a plastic with the right friction coefficient that is hard wearing, won't melt, and won't damage the tire. Thus, cheaper dynamos go with a cheap metal casting. As @ojs notes, you may be able to get replacement rollers for higher end units.

Not the answer you're looking for? Browse other questions tagged wear dynamo or ask your own question.

21
Why are battery-powered lights so popular?
2
Strange dynamo behavior

14
Bottle dynamo vs. hub dynamo
2
How to replace a bottle dynamo with batteries
2
Checking that the dynamo hub works
1
How to choose the light bulbs for a given dynamo
10
Just how bad are bottle dynamos?
4
How can I spin a dynamo wheel at road speed for bench testing?
0
AXA bottle dynamo noise
1
Can any dynamo hub get the electricity rotating with the spokes?
7
Will running an LED designed for batteries on a NEXUS dynamo hub damage the LED?
2
How should I finish the dynamo cable connection from SON coax to an SP connector?