is biking lower wacker drive in Chicago a good/feasable idea?

Not sure if location specific questions are on topic here but, here goes:

I live in Chicago, and I'm curious about biking Lower Wacker Drive. (If you're not from Chicago, it's where the underground scenes were shot in Batman: The Dark Knight). It never seemed like the best idea, but 1. It is easily the most direct route between my house and work and back 2. I do occasionally see bikers on it when I'm driving down there

Specifically I am interested in the chunk between Harrison and Franklin to Lower Michigan and Illinois (which is a fairly large chunk).

Lower Wacker is a multilevel street that runs through downtown along the Chicago river. Since it's underground, it doesn't intersect with a lot of streets, making it an ideal shortcut through downtown if you know your way around. They don't specifically have a bike lane, but I do see bikers down here from time to time.

The obvious risks are that there is no bike lane; I tend to prefer routes that offer a bike lane, and since there are typically few to 0 bikers down here, drivers are likely not used to looking out for bikers.

Is it a horrible idea to bike here? Is it reasonable if I am paying close attention and taking care to be aware of my surroundings? I would especially value a response from someone who has experience biking down here. 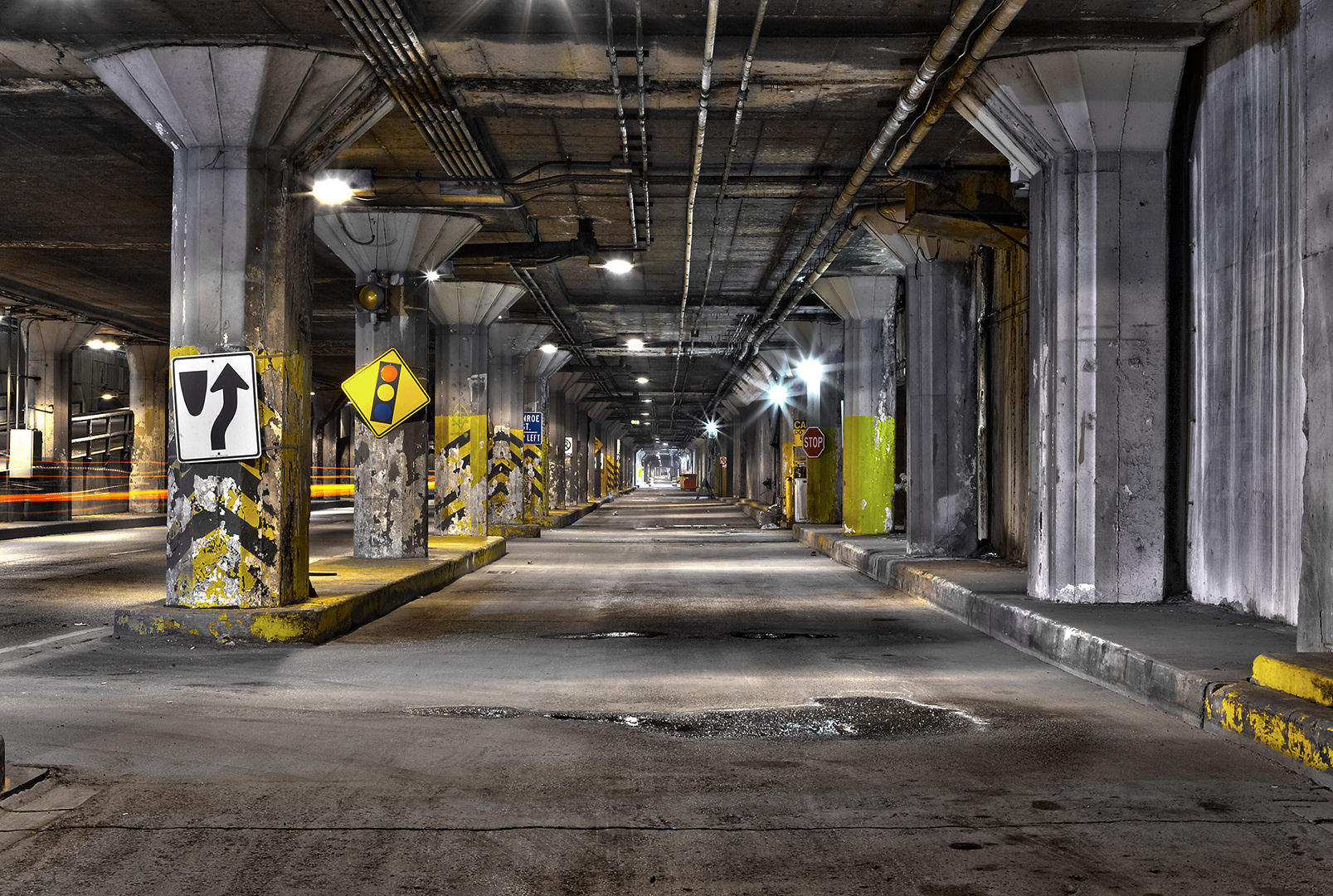 bikeroutes city us
Share
Improve this question
edited Feb 28 '17 at 8:53

I checked around using google street view to get the image in the question. Some observations...

Street View has a real problem following the level - it pops you between levels on the same road, which leads to the point that there is an upper and a lower deck, that both follow the same course. Why would you confine yourself to the narrow dark and dingy lower deck?

The one advantage of the lower road is if its raining, you'll be covered for some of our journey. However the cars will also be wet, making for slipperier roads and dirtier road spray. The driver's vision will also be obscured to some degree, lowering your safety just as much if you were in the open.

This idiot has recorded a ride on the lower deck. He's giving all cyclists a bad name with his riding style, and I see no lights at all.

Other Routes This PDF has some useful info http://chicagocompletestreets.org/wp-content/uploads/2016/01/2016-Chicago-Bike-Map.pdf

Here's a snip showing just the whacker drive area. Franklin, Wells, Dearborn and State are all north/south roads with some kind of bike space. Washington, Lake (?) and Harrison are all east/west roads with some bike considerations. You've got some options. 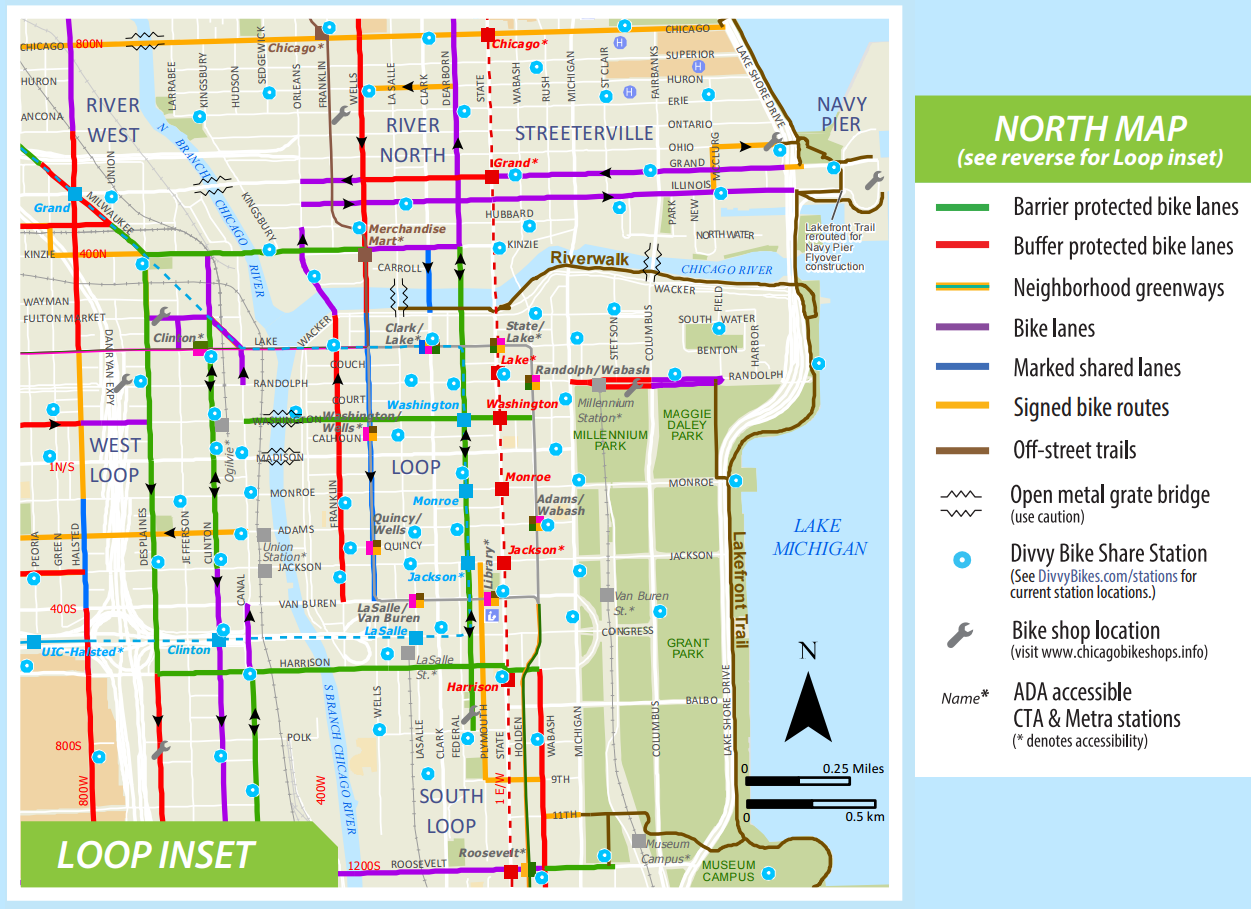 No, it's not a good idea

If you said that you see many cyclists every time you drive there, then that would be a route to consider.

But you see only a few cyclists. The Wikipedia page says

Forget it. Find a route cyclists use. Your first priority should be to survive every ride.

About me - I live in downtown Chicago and have been riding seriously in the city for 10 plus years, for most of the year, multiple days per week.

For the last 2 years, I have been walking to and fro work each morning mostly down upper Wacker for the bulk of the way. I come home for lunch on the same route, and then back to the office in River North. I keenly observe the riders every day, which range from professional curriers to daily commuters, to tourists and divvy riders. I ride in the area myself.

I'm going to play devil's advocate and say that if you feel confident with the route, the traffic patterns, and are a fairly strong rider, then go for it! Make sure to use bright lights on your bike, reflective clothing, etc.

People ride upper Wacker every day, people that probably shouldn't even be riding downtown. There isn't that much difference between upper and lower except that there is much less natural daylight. Everything the others have said about lower Wacker is valid (mostly), but the same can be said about upper Wacker and it's ridden heavily.

Personally, I don't ride upper or lower Wacker - except on Saturday and Sunday mornings when CTA busses are not running as often and traffic is generally clam. By noon this calm subsides and I'm off of Wacker.

I can guess the general area where you live or are starting your ride from and based on your destination, going through lower Wacker to lower Michigan might be the route that offers you the most cover from the elements, is the most direct, and will have the least traffic lights. So, while it might feel more dangerous, I hesitate to say it is. There is a "tent city" that has started under lower Wacker and by the river walk, with homeless people living there, but I don't fear them or worry about being attacked during a ride.

To reiterate, lower Wacker wouldn't be my choice, but if I were riding your route, I might consider it after some practice on the weekends. One more thing - if you do start riding lower Wacker, or upper Wacker for that matter - take the whole lane. Don't try to share it with a car. People might get mad but that's not your problem. Better to let them slow down and pass in the left lane then get sideswiped or surprised by someone who is too close for comfort.

Not the answer you're looking for? Browse other questions tagged bikeroutes city us or ask your own question.