Biking across a four-lane bridge - Why was I wrong to bike across the bridge?

I am an avid bike-rider living in Spokane (Washington State). Spokane is a fairly large city, with many bridges built across the Spokane River. One such bridge is the Maple Street Bridge, which was built in the late 1960s and four lanes set to 45 miles per hour and a caged sidewalk on the west side.

In the summer of 2015, I was riding my bike in the right-hand southbound lane, and my presence in the lane angered many of the drivers on the bridge. The speed limit on the bridge is 45 miles per hour, but when a driver encounters me, s/he becomes enraged and flies past my bike faster than the speed limit.

I lost track of how many times people screamed at me as they passed after the fourth time. Also one man drove so close to my bike that his car's wing mirror brushed my jacket. I consulted my Grandmother about the incident later and she told me that riding a bike across the Maple Street Bridge is illegal. However, I thought biking on sidewalks is also illegal, and the City of Spokane is pretty good about letting bikers know via signs where they can and cannot ride a bike. I did not see any such warning sign while approaching the bridge, and the approach to the bridge is about one quarter of a mile long.

This bridge as I have mentioned only has one caged sidewalk on the west side. Once I am on the bridge deck, I cannot turn around and I cannot enter the sidewalk because of the cage. 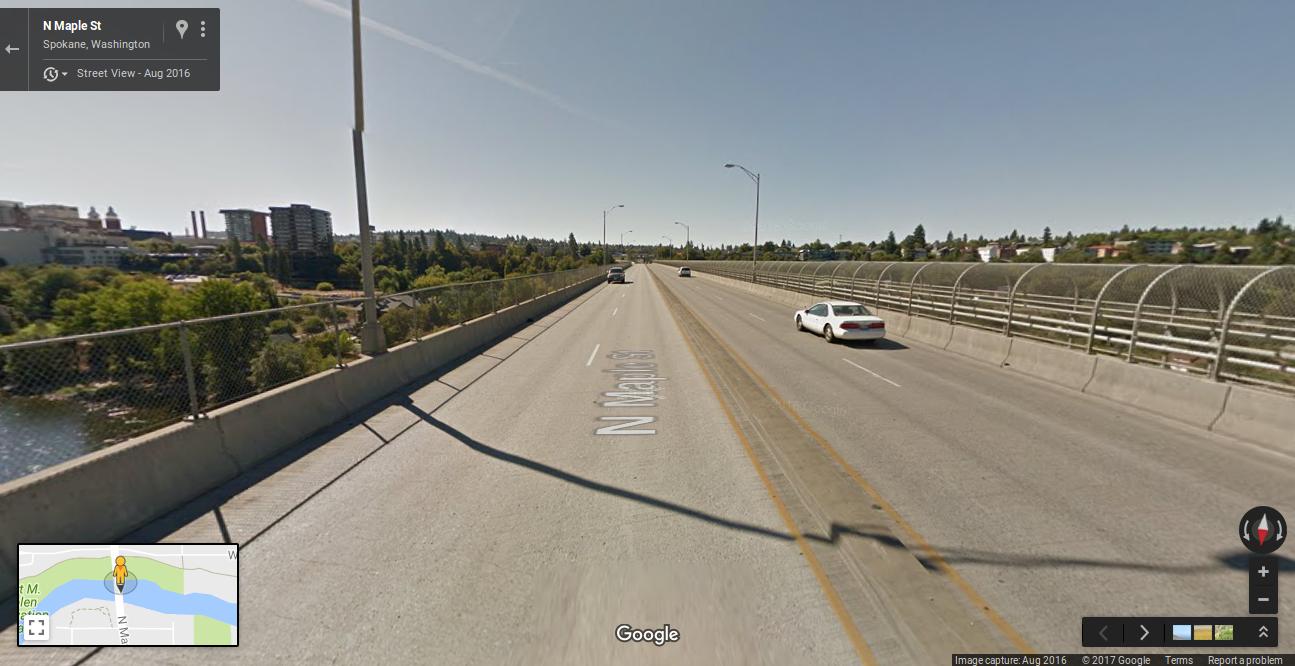 Why was I wrong to bike across the bridge?

I can't speak for this bridge specifically, but here in Ottawa, Canada, we have at least one similar bridge and in our case, the part you're calling a sidewalk is actually a multi-use pathway from what I can understand, and bikes are expected to use that. As such, I would never use the traffic lanes on the bridge I'm referring to. The sidewalk/pathway part is still narrow so you have to slow way down and proceed very carefully when you encounter pedestrians, but it's worth it to avoid the car lanes on that particular bridge.

One thing I find helpful is to check out the roadway in question on Google Maps with the bicycle layer turned on. In the case of my bridge, it clearly shows the bike lanes on the side of the bridge as dedicated pathways, which may not be obvious to a newcomer to the bridge: 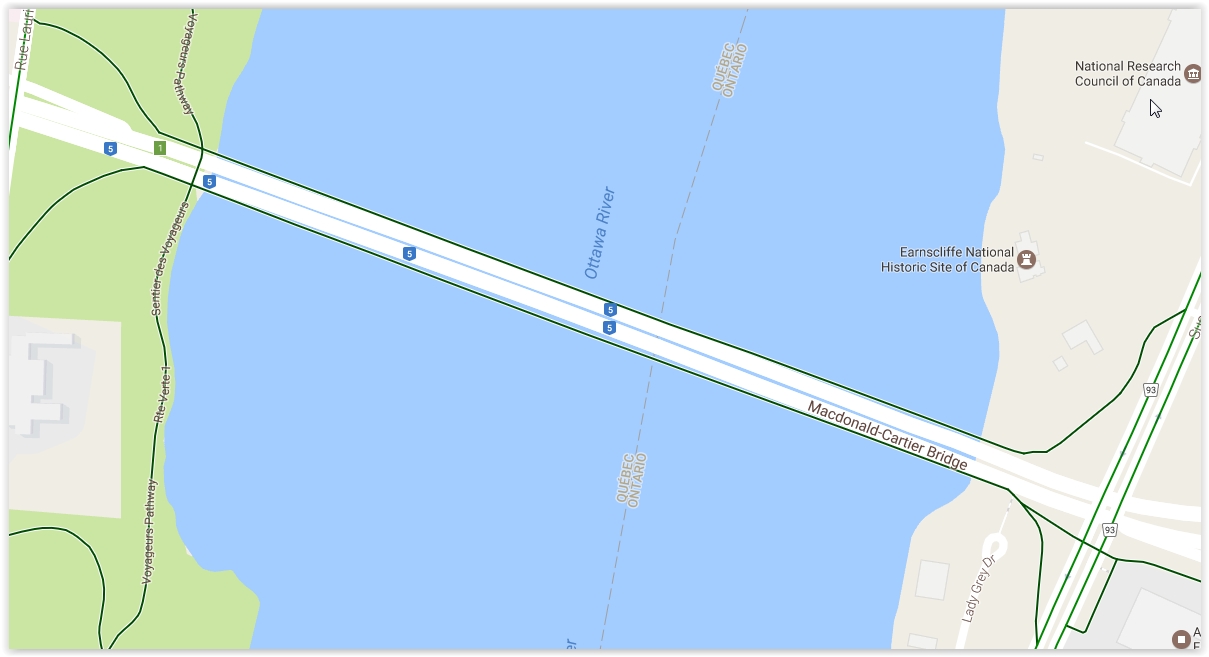 In your case there are no bikeways of any kind showing: pathways, or even shared lanes (dotted lines) on the bridge: 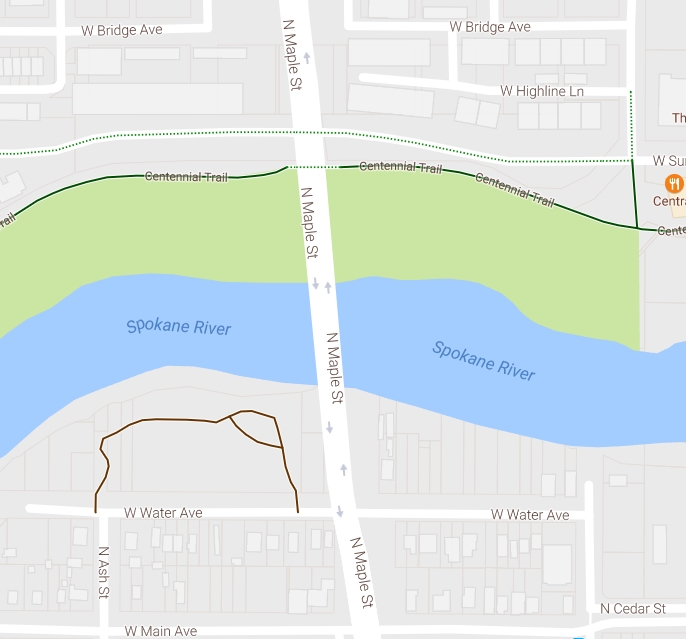 But there are lanes visible on roads on either end of the bridge. So either your municipality has uploaded incorrect data to Google Maps for the bridge, or you're technically supposed to ride in traffic. However, if you feel unsafe, in my opinion for short distances like crossing a bridge, you should use the sidewalk and proceed very carefully around pedestrians. If it's a tight squeeze, get off and walk your bike when you get close to a pedestrian, or stop while they pass. I also find that very car-oriented bridges like that tend not to get much foot traffic so it's usually not too bad riding the sidewalks for the short distance.

Per the comment below, checking a route in Google Maps, it may suggest a more bike friendly river crossing if one is available. If it does not, you can also zoom out a little and turn on bike lanes to see what other options are around. In the case of your bridge, zooming out we see:

(your bridge in red, two bike friendly bridges in purple)

Zooming in on the right hand option, and going to streetview, it has a separated two way bike lane which is quite pleasant: 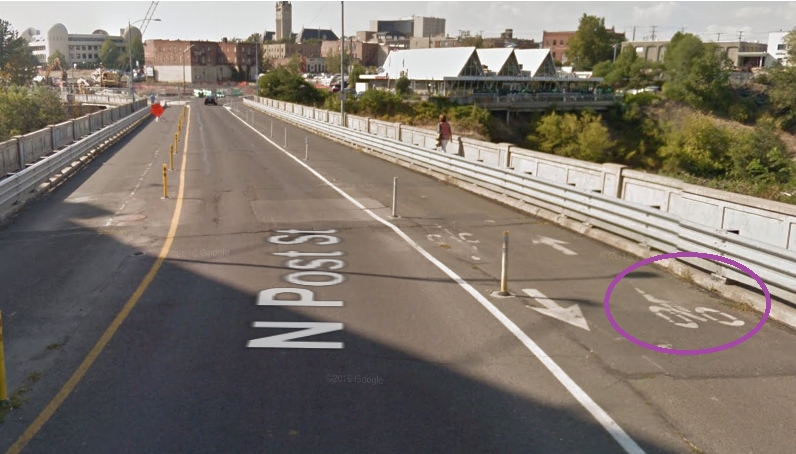 That's about a 1 mile detour on a short commute across Maple Street bridge: 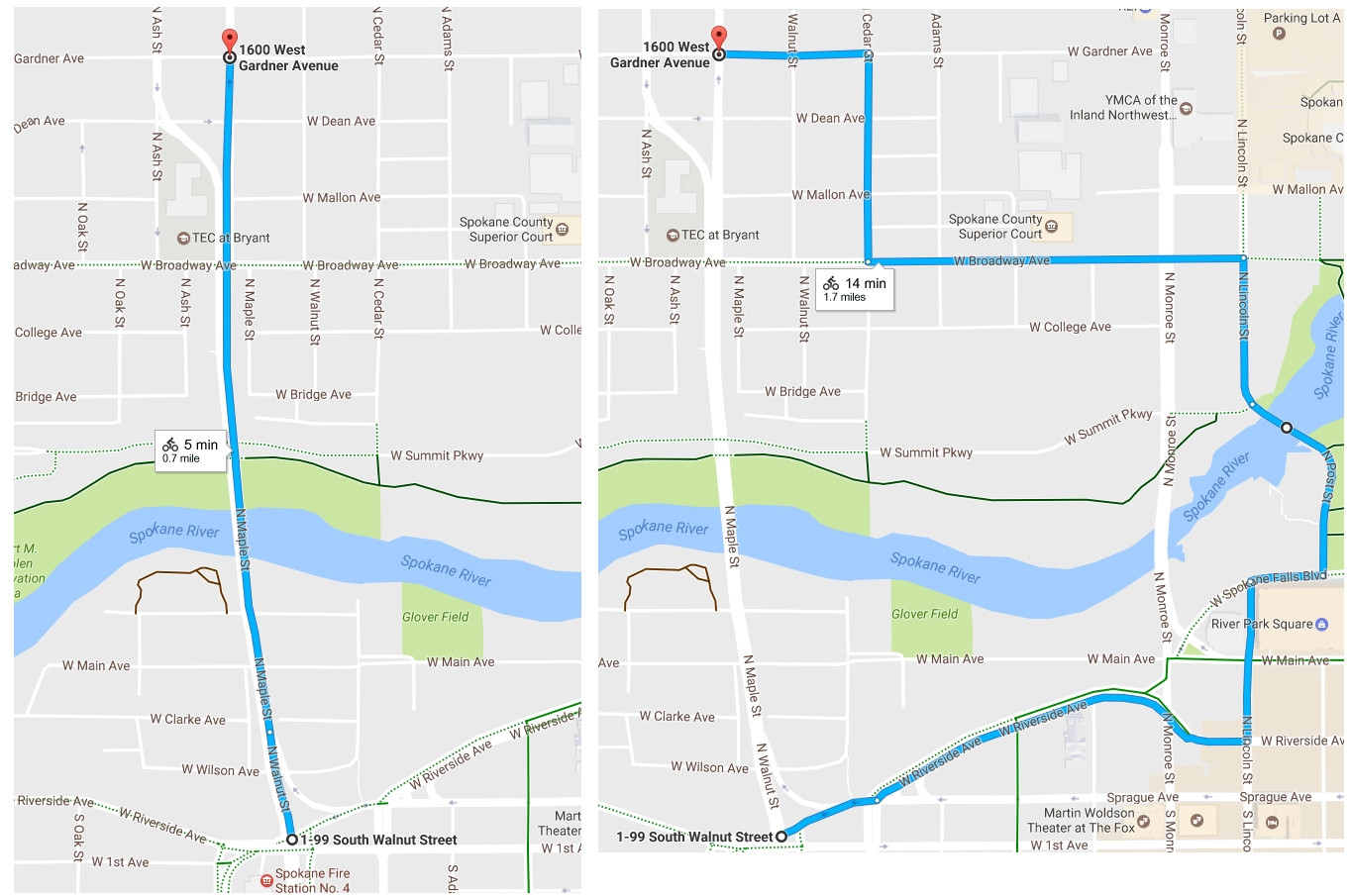 Depending on your actual commute length that may feel negligible or may be a deal breaker. If your commute is much longer than that, you may also be able to rejig other parts of the commute so you take that other bridge without adding the full mile difference.

Hopefully some of this helps.

Not the answer you're looking for? Browse other questions tagged road-bike safety or ask your own question.

16
When should cyclists use pedestrian facilities?
13
Are runners or pedestrians allowed to use the bike lane?
15
How should I deal with bike messengers + others (salmon) riding the wrong way in a bike lane?
6
If a lane is going to expand should the left lane be taken prior to the expansion?
15
What is the safest and most courteous way to ride on a two-lane road?
25
Wrong way on a bike lane?
24
At what point does a road become too busy/fast to ride on safely?
7
How to cross major road 3 way intersection
0
What’s wrong with the bike