The cheap one (£20--40 £/$/€ on eBay/amazon) was quite big. It had some nice features, but converting between modes was slow and relied on removing a plate that held the rack hooks. This wasn't as secure as I would have liked -- it fell off a few times until I reinforced it; the rack hooks also needed replacing with stronger ones (Carradice) after the flimsy plastic failed. A year of daily use and the fabric is going on the corners. The straps and back pad zipped away when not in use, which kept the mud off, though they still got a little damp and some dirt from corners could get on clothes. 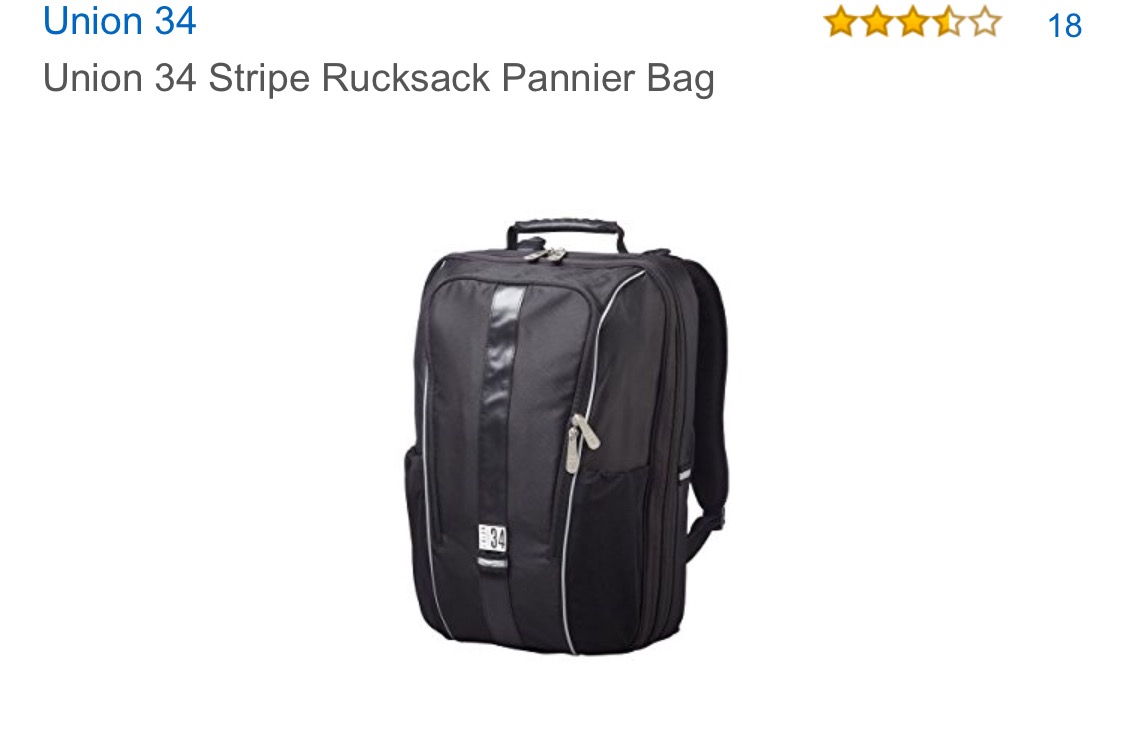 The new one from Altura is made of much tougher fabric and is much easier to convert. The backpack straps are on the outside when riding, away from the wheel and therefore the worst of the dirty splashes. This also means no adaptor plate to lose. This came from a large (chain) bike shop, but they only had the one type in stock. This meant I could try it on (but not on the bike which was in the wrong city). You may need to decide whether you want a left or right model as some are tilted to avoid heel strike. I got this wrong but can get away with it on a big frame. This was good after a very early warranty replacement for a failed main zip, but the zips are clearly a weak point because the main one broke after a couple of years. I'd like to replace it but that looks very difficult so I'm back on a cheap backpack 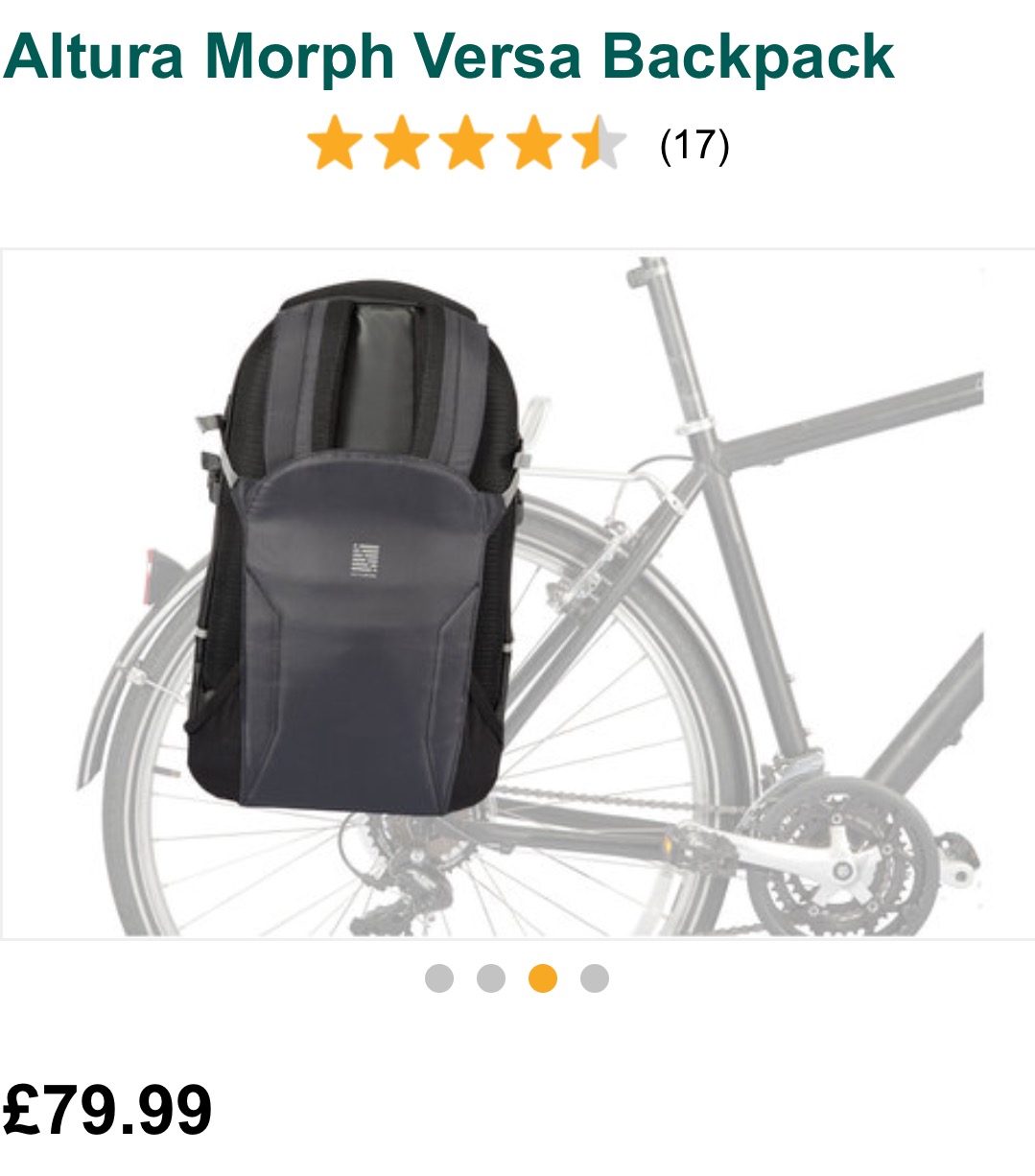 It’s basically a bare bones shoulder harness with loops for the pannier hooks.

An advantage here is that it keeps the dirt off your clothes and you can leave it at the office, only having to carry your panniers on the bike. Disadvantage is that it takes a few moments to “convert”. 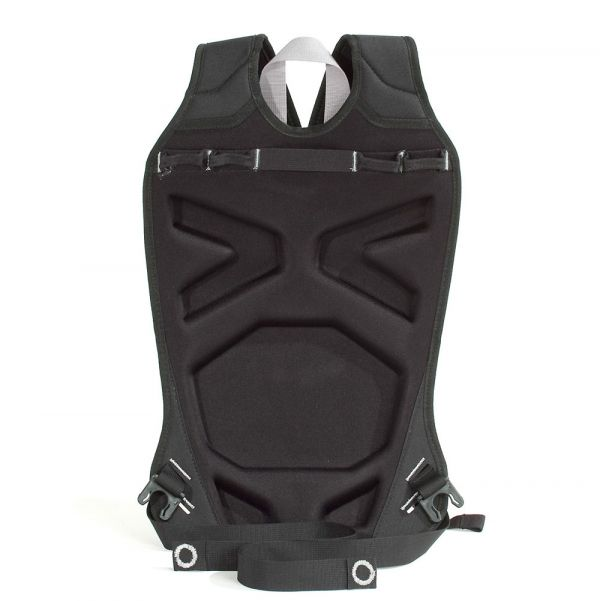 I also like this idea from Decathlon: it’s a backpack with two main pockets, that can be split by a zipper (one of each side, technically), and the hooks to attach it on the luggage carrier are between the pockets. I haven’t tried it, given I only use my bike for sport, but it seems very interesting. One good point is that the dirt and water coming from the wheels stay “inside” the bag. 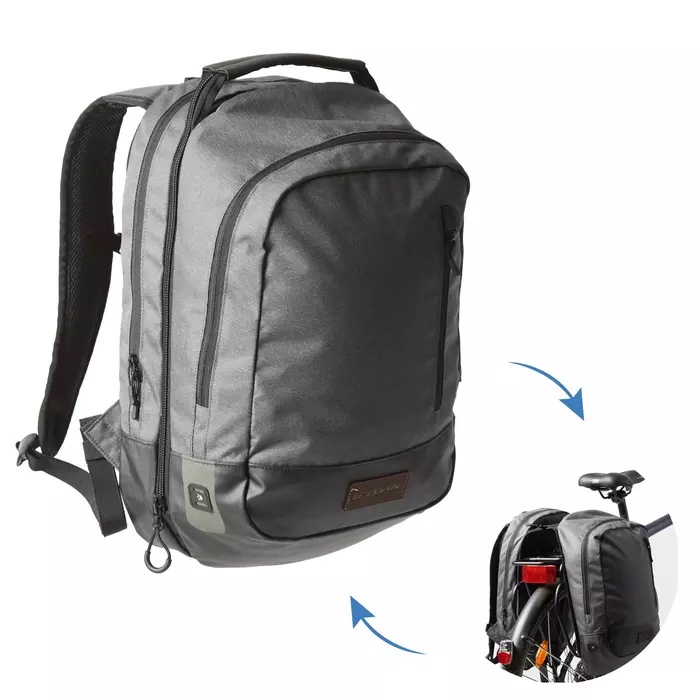 32
What are the pros and cons of panniers vs messenger bags?
27
Best practices for commuting with rack & panniers
8
Long Distance (~30mi) Bag Use
2
Which rack top bag fits an 11" MacBook Air with space for a little padding?
1
Medium size cargo solution for road-bike for commuting
16
How to improve my performance on a commute?
7
Options for carrying a smart briefcase on a bike (pannier or otherwise)
4
What can I get for panniers to commute with my 17" laptop?
2
Convertible front pannier bags