What kind of wheels use spoke washers/nipple washers?

Just that, what kind of wheels use spoke washers?

Is this a nice addition to any old wheel, or are certain rims designed to use these? Would these perhaps help with a damaged spoke hole in a rim?

I'd guess you would not normally want to use these with rims not designed for them, because it would elevate the nipple head into the space occupied by the tube and tire. 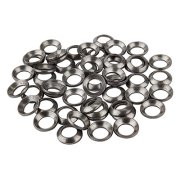 Spoke washers are used at the hub end, between the flared out cap and the hub itself. The intention is to take up extra length between the bend and the end, to help prevent the spoke from breaking. Common use is on hubs with thin flanges (for lightweight or because they're cheap) and on heavier loaded bikes to spread the load.

Notice how the lower spoke is snugged closer to the hub? The upper spoke is more likely to break sooner. 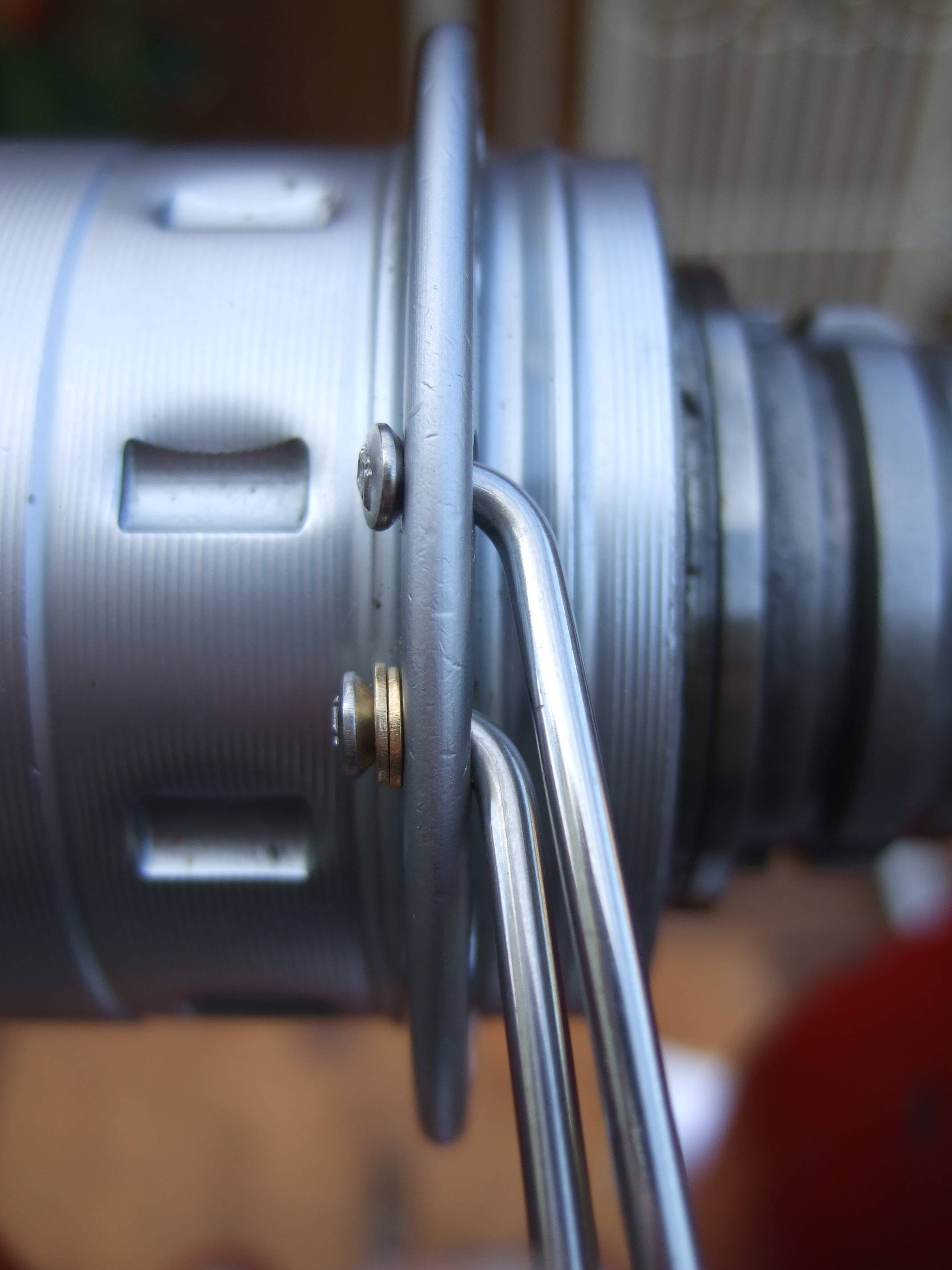 The nipple washers are for spreading the load at the rim end of the spoke. You're right that the washers have to fit inside the rim track/valley but that's so they lie flat against the inside of the rim, rather than touching in two places and focusing the stresses. Again, touring bikes or load bikes would be the place to find these. Race bikes wouldn't have them.

Nipple washers are used to allow the spoke to leave the rim at a strange angle. Normally the spoke leaves slightly away from 90 degrees (pardon the pun) so the nipple is not flat against the rim, and the spoke is under a slight bending load.

Here's a rim with large domed washers that let the spoke stay straight. I think this might be a motorcycle rim, but the concepts are the same. 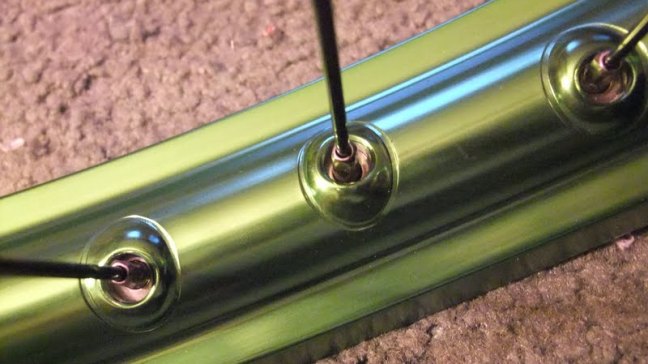 If you have a damaged spoke hole, a washer may help, but its a judgement call about how much damage you can safely ride on. If the spoke nipple fits through the nipple hole, I'd not ride on it even with a washer, because all you've done is put the load on a stamped washer then onto the edge of a damaged hole in the rim.

Would you trust this rim if it had a 2c flat washer below the cracked piece? A curved rim washer would just make it worse. 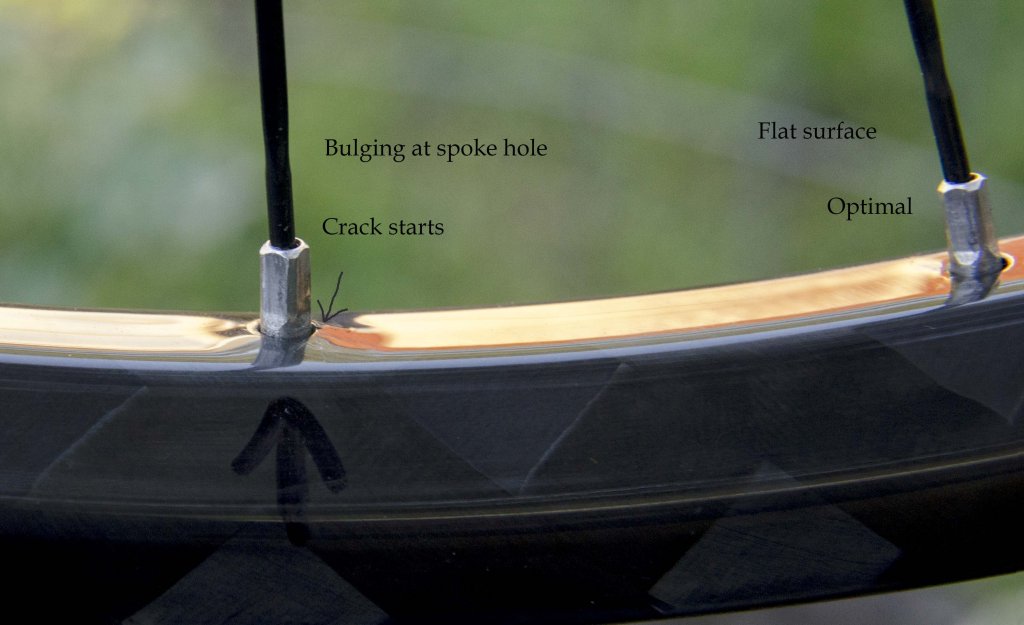 Tubeless tyres take away the worry of pressing on the washer - here's an extreme example on a fatbike wheel: 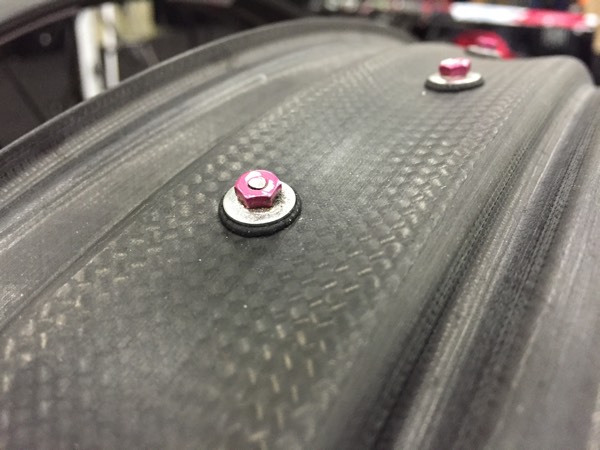 For most of the last 50 years, higher quality rims had steel eyelets at the spoke holes to distribute stress and double-wall rims had ferrules that were crimped by the eyelets and which distributed the stress of the spoke to the outer wall, as well. Mid-range, double-wall rims would sometimes have the eyelets without the ferrules. Adding this extra steel (later stainless steel, to control oxidation) added some weight, but even racing rims typically had them. More recently, we're seeing a lot of manufacturers ditch the ferrules and even the eyelets. I cynically think this has a lot more to do with marketing and lack of consumer awareness paving the way for manufacturers to avoid the additional expense of adding these features, rather than from an engineering standpoint. Consumers seem less concerned about rim and tire weight than they used to be. There are newer theories that rotating weight on the rim and tire is not as significant from a performance standpoint than once assumed, but this may be biased to support the push towards wider tires and rims. I've noticed that the thickness of the aluminum extrusion seems to be much greater on modern rims than back in the 1980s and 90s, especially on racing rims, and the thicker walls are likely more resistant to cracking from the stress of the spoke nipple than in the past. I suspect that ferrules also make it more difficult to seal the rim tape in tubeless systems. Riders seeking to reduce rim mass tend to be more interested in carbon fiber rims, anyway, in spite of all the problems that material introduces. Bicycle component performance is much more about customer perception than engineering reality.

Building with nipple washers is a bit of a pain and can easily double the time it takes to lace the wheel. Still, I would suggest adding spoke nipple washers on most non-eyeletted wheel builds. Some popular rims, such as many DT models, don't have eyelets, but I think they get away with this more through marketing and brand recognition than through superior engineering.

One more thing--eyelets do not always equal "better." Back in the 1980s, Mavic went through a time when it seemed that they were incorrectly crimping the eyelets and this resulted in tiny stress risers that resulted in a whole lot of rims cracking at the spoke holes.

Not the answer you're looking for? Browse other questions tagged wheels spokes wheel-building nipples or ask your own question.

3
Can spoke j-bend be too long for hub?

2
Are velocity A23 rims suitable for building a wheelset for a 29er Mountain bike?
5
Spoke and nipple compatibility
3
Wheel building - ever encountered nipples that are screwdriver-only?
1
What kind of wheels need different nipple for front vs. rear?
3
Ordering correct spoke nipple size
3
Can I attach a 40 spoke hub to a 36 spoke rim?
3
Spokes are too long for wheel build. What did I do wrong?
1
What should I do about a tensioned/trued wheel that lost significant spoke tension after first use?