When I try to pump my bike tires (Dunlop valves), the valves resist letting air in. It's as if I'm trying to pump air through a blocked valve. If I push really hard and I have a lucky day, something inside gives way and the valve starts working normally, inflating the tire.

Some weeks later, the problem is back to square one and I have to perform the procedure again. I have tried at least three different pump brands. Outside temperature is around 10 degrees Celsius. My hardware is not very old, one or two years, and I have 4 tires with this problem.

Is there something simple I can do to remedy the problem? I'd like to avoid replacing inner tubes and valves if possible.

There are two types of Dunlop (or English) valves. I shall come back to these below. All valves have commonalities.

First of all, one has to overcome the pressure in the tire before air flows into it. Unlike the valves on a car, the valves on bicycles are check valves that are held close by a higher pressure on the inside. When you pump, you will sense that the pressure builds up in the pump, its hose, etc, until suddenly the valve opens and the air streaming in may be heard.

Any valve may also have dirt or other objects in side, check if your valves are clean. You can remove Dunlop valves and wash them in water with a small amount of dish-washing soap.

The higher pressure in the tire pushes as rubber hose against a hole in the valves stem, sealing it. This type of valve is now uncommon in most of Europe, but may still be found on older bikes or, for instance, in China. 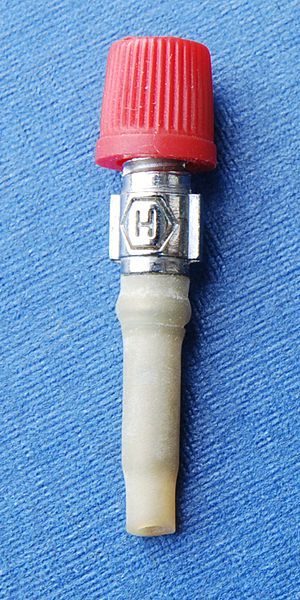 The rubber hose may degrade. This typically leads to the tire leaking. That it sticks to the hole is conceivable. Tire repair kits often have these little hoses included. In a pinch they allow for quite a lot of improvisation. Otherwise they ought to be replaced with the new type.

It is conceivable that the rubber hose is very tight and that you have to blow it up like a balloon first. However, that is just a wild guess. I have thrown these valves right away when I found one in an old bike.

A small rubber or metal ball inside a ferrule is pushed by the internal pressure up against the valves opening. A very common type of valve in parts of Europe. This type of valve is often called a Blitzventil in German speaking countries. 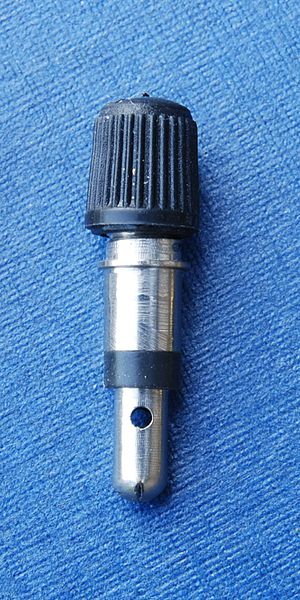 This valve is somewhat susceptible to dirt, and ought to be used with its cap only. Usually dirt will prevent proper seal such that the valve leaks a little. Oil, grease, or harsh detergents may foul valves with a small rubber ball. It is conceivable that it gets sticky and clings to the opening.

Some of these valves tend to become slightly harder to open when they were pumped to a high pressure before. In that case the rubber ball is wedge very hard against the valves opening, and it takes more force to push it inside. Since one has also to work against the pressure in the inner tube, it may be significantly harder to pump it up.

In my experience, this is not much of an obstacle it just takes one tough pump stroke, and its free. However, your valves might be worse in that regard. If cleaning doesn't help, consider replacing the valves with other Dunlop valves. They cost about 0.5 Euro a piece.

Adding this additional answer in case someone runs across the same problem as I just did with these Dunlop valves.

I'm a complete amateur at bikes and as I was pumping my tire today, I suddenly couldn't manage to get any air in. It felt just as if it will if you hold your finger against the hope in the pump - air flow completely blocked.

Okay so I tried harder in case there was dirt or something clogging the valve. Then I actually managed to blow the rubber valve in the hand pump... so "use more force" isn't great advise. You can't destroy the tires by pumping too hard, but you may destroy the pump.

After watching various tutorials on the net, I came to the conclusion that I have a Dunlop/English valve. These are supposedly an easy to use kind: you only remove the plastic cap (which is there to protect against dirt, it has nothing to do with air), place the pump against the valve and start pumping. You should hear air getting pressed inside the tire with each stroke. Super easy - on every tutorial out there I watched, this was a walk in the park. Except in my case, this didn't happen.

There is a nut on the top of the valve, when pumping you don't need to touch this: it is used when letting air out of the valve. Rather, you should ensure that it is tightly secured before pumping.

You can remove the nut and let all air out of the valve, then remove the actual valve, it's a removable part as seen in the picture in the answer by @gschenk. In my case, the small holes you can see at the bottom of the valve were clogged with dirt - I couldn't see through them. I carefully cleaned them up by removing the dirt with a bit of metal wire. (No idea how it had gotten blocked up since I never remove the cap, but my bike lives a hard life commuting even in rain and snow.)

Once cleaned and the nut secured, I could pump the tire from flat to full with some 10-20 pumps of a rather crappy hand pump - and there should be no resistance when you do so.

AmarthAmarth
12122 bronze badges
New contributor
Amarth is a new contributor to this site. Take care in asking for clarification, commenting, and answering. Check out our Code of Conduct.
Add a comment  |
0

When I try to pump my bike tires (Dunlop valves), the valves resist letting air in.

There is nothing forcing you to use Dunlop valves. Tubes having Dunlop valves only work on rims having drilling for Schrader valves which allows you to use these two setups:

Some users might even successfully use Presta in a large hole without the grommet and the special nut, but I'd say the grommet might be useful for higher pressures.

Is there something simple I can do to remedy the problem? I'd like to avoid replacing inner tubes and valves if possible.

Inner tubes are consumables so throwing two away is not a big problem.

Not the answer you're looking for? Browse other questions tagged tire pump valves or ask your own question.

4
Does a typical floor pump have an integrated one-way valve?
12
How to inflate a tire with a Presta valve?
2
Cannot fit pump nozzle properly to the presta valve of my tyre
5
Pressure gauge on my pump stuck at one value, what is wrong?
4
Am I unscrewing my pump incorrectly?
2
trouble inflating tires
3
Any fix for a schrader valve that won't open?
1
Tires Not Taking in Air But Will Let Air Out
2
What is this valve and how do I fill it?
1
What is the typical structure and location of a check valve in a floor pump?