I have asked this elsewhere on the internet as well, but this is the Stack Exchange adaptation.

I have three related questions and I'll try to make it clear what they are. Here's some background where I've tried to boldface the most important parts:

Very recently I bought an old 1976 steel racing bicycle from the local Craigslist-like site. The previous owner said pretty much only the frame was original, and most everything else had been replaced recently. Sure enough, everything looked new and from a quick inspection nothing seemed out of place either. On the short ride home that evening, it rode like a dream as well.

The next day I rode to and from work and noticed the handlebars creaking when I put weight on them. That continued to and from work today, so on my way home I popped into a local bike shop and while they didn't find anything immediately, I asked a question that prompted them to remove the threaded stem.

Apparently, the stem tube had broken clean across the "slanted" part. I've attempted to illustrate where the break was here: 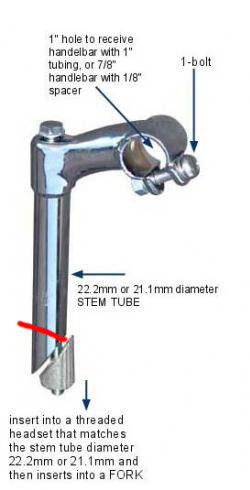 Their best guess was that the previous owner had raised the handlebars too much, and the metal just couldn't cope with the load so it cracked. And when the two pieces of the stem tube ground against each other that made a creaking noise.

You can imagine how glad I was that I got it investigated.

Since the LBS didn't have a replacement stem in store, they decided to put the handlebars back in with the existing, broken, stem tube. They reasoned that if the handlebars are low enough, there should be enough stem tube still inside the headset that nothing bad will happen. They assured me that I would be safe as long as I don't attempt to raise the handlebars.

Question 1: I guess there's a reason the stem tube is "slanted" like that. Why? Does it matter if my stem tube is broken and not slanted anymore? Do I risk breaking more things? Am I really as safe as the LBS wanted to assure me? (Based on the reading I've done, I'm guessing the slant is there to make sure the steerer turns with the stem, and the LBS might be thinking that the friction between stem and steerer should still accomplish that.)

If I wanted to, they said I could call them and they might get a new stem and do the replacement. Their best estimate was something like $70 dollars for the stem and work to replace it.

Now, I have some bike maintenance experience – but mostly the basics. I've intentionally refused to do anything that requires a torque wrench. However, I made sure to watch them work on my headset now, so I'm fairly confident in my understanding of how everything fits together. I think I may be able to replace the stem myself.

Question 2: The LBS guessed it would be about $40 to get the stem, but also said they had no idea where to order such a thing because it's a pretty old bicycle. Is there any chance I can get a hold of it for cheaper?

Question 3: If I think I can replace the stem myself, am I deluding myself? Is it hard? Easy? What might I have missed when looking at them work on the headset of my bike?

I guess those are the most pressing questions, but I'm also sure more will pop up. Thank you for taking the time to read!

To focus on Question 1 - the reason the stem tube is "slanted" is that the wedge is pulled up firmly inside the fork's steerer tube and makes a good tight connection.

There should be no/minimal insert friction when adding/removing the quill stem. The wedge gets pulled up but forced forwards to the inside wall of the tube.

YES its a bad thing that the slope is broken off

You're probably OK to tootle around on this bike with the quill stem down, but for peace of mind I'd replace it with either a new or replacement quill stem, or the threadless suggestion from Kibbee.

Replacing a quill stem properly will probably require untaping one side of the bars. This can generally be done so that it saves your bartape. You'll also have to remove a brake lever but not its wires. I got a tall 20mm used stem off the local auction site for $10. So most of the cost is labour.

You won't need to touch any bearings to replace it.

Here's how I would fix the problem. This could all be done by somebody with basic tools and basic knowledge.

Get a quill-threadless stem adapter and a new stem. This will allow you to fit the new stem to the handlebars without removing anything from the bars. The old stem can be removed destructively by removing the cinch bolt and prying the thing apart since it is already broken and no longer fit for use.

Using a new theadless stem will give you a huge variety of stems to choose from so you can find the right length and angle to fit you comfortably and match your riding style.

I'm not recommending those specific products, but those are the type of products you should be looking for. Make sure the handlebar end of the stem is the proper size for the bars you already own.

I got a threadless stem adapter a couple years back for my old bike and it makes working on anything to do with the handlebars so much easier.

What you have now is a bit of a hack, but it could be good temporarily so long as you don't over-stress things somehow, and if you can tolerate the lower handlebar. (Note, I haven't seen how your stem is cracked and so can't tell how bad the situation is.) It's not likely to fail catastrophically (so long as you're not hot-dogging on the thing) but the handlebar will probably tend to twist on you, it stresses the fork a bit, and so you'll need to get it fixed eventually.

The original stem was slanted on the bottom so that the wedge-shaped piece on the end of the fixing bolt would slide along it and wedge tightly into the fork tube. If the break is perfectly horizontal then this wedge effect will not work very well and the handlebar will tend to shift as you ride. Without seeing the break I can't say how much of a problem this is.

And it should be noted that there is some danger that the current arrangement might over-stress the fork tube and cause it to split/crack. It's rare for this to happen but I have seen it.

The hard thing about replacing the stem is not getting it into the fork tube, but rather removing it from the handlebar. You have grips and brake levers on the handlebar, and possibly shifters, and one side of those would have to be removed/replaced to replace the stem. This is not a technically difficult task (though removing the grip may require some tricks of the trade) but it's tedious, and the shop guy aren't real anxious to do it. (It's always irritated me that this stem design did not have a clamp that allowed stem replacement without all this hassle.)

The obvious choice for a new stem is a used one. A little tricky to find one the right size (in addition to the rise/offset of the stem that affects its position there's the diameter of the stem in the tube and the handlebar where it's clamped by the stem -- these must match). But for a moderately-priced bike of that era probably more than half of the stems are the same basic size.

Ideally you should get yourself a vernier caliper (cheap plastic ones can be had for $5-10) so that you can go around checking out potential "donor" bikes easily. There are lots of old bikes sitting around in basements and garages, and you may even find a scrap dealer in town with a stack of junked ones. (Hint: If you go to a junk yard take along your vernier, a few wrenches and screwdrivers, and a decent wire cutter. Buy the whole handlebar assembly and just cut the cables, if you can't easily get the stem loose from the handlebar in the yard.)

Criggie is right, but I would not use it like this as a stop gap. The slanted edges are inclined planes. Tightening the nut causes the plug to go off centre to the stem. This causes high friction inside the tube. It does not matter how the stem is broken, it will not work as designed.

Even with very tight tolerances between the stem and the steering tube there remains some very tiny movement. Reason why you periodically check it to tighten again. That's why it creaked. Relatively big movements.

Grease will definitely take the creaking out, but that is No Good Idea. You want the friction to be as high as you can get it. Besides taking your weight at times, the thing actually steers your bike. In a car this would be called a life and limb fitting.

I'm sure you enjoy the bike at speed as well at times. Once had the left handle bar break half off on a national road at night. Gave way, but let me correct some. Bad wobble, big fright. Luckily no trucks anywhere near, or cars.

Removing a vintage stem would require some work ( or money if you pay a shop to do the labor) because you will need to remove / reinstall whatever is attached to the handlebar on one side ( handle bar tape / grip, brake lever and / or shift lever. You would need to remove every thing attached to the handle bar on one side, remove the stem from the fork / steering column (easy), loosen the bolt that binds the handle bar to the stem, and then slide the stem off of the handle bar on that side.
I would not ride a bike that has a busted stem, even with a stout steel fork... You should be able to get a one inch stem for a threaded fork for a lot less than 40.00...

Not the answer you're looking for? Browse other questions tagged safety mechanical headset replacement stem or ask your own question.

4
Is threadless a noticeable difference from threaded headset setups?
3
Is a long, high angle stem safe to use with a carbon steerer?
2
Removing top cap and stem from Acros headset?
6
Stripped thread on steerer. Who is at fault - me or LBS?
5
Is my carbon fork steerer tube damaged by overtightened stem bolts
7
Gap in headset dust cover--what am I missing?
1
Help getting the right headset bearings
5
Headset, stem and steerer tube gap?
3
Ways to increase handlebar height?