So today a big tour bus pulled into the bus lane in front of me. In the process of doing so, they came pretty close, within an arm span. Then, further down the road the traffic slowed them down and I passed them. When they caught up with me they passed within an arm span again.

They never actually touched me, and I didn't have to swerve or stop suddenly to avoid them. Nonetheless, it didn't seem particularly safe; not having driven a tour bus I don't have any idea how confident the driver could be in pulling this off, but it felt dangerous.

What constitutes dangerous driving? What metrics can I use to make a judgement call about whether a vehicle's actions are actually making me unsafe, as opposed to just alarming?

The UK Highway code says they should give you as much space as they give a car, illustrations in the code suggest they should move completely into the next lane. At least one UK police force uses 1.5 metres as the minimum separation.

My old copy of the Highway Code has this illustration: 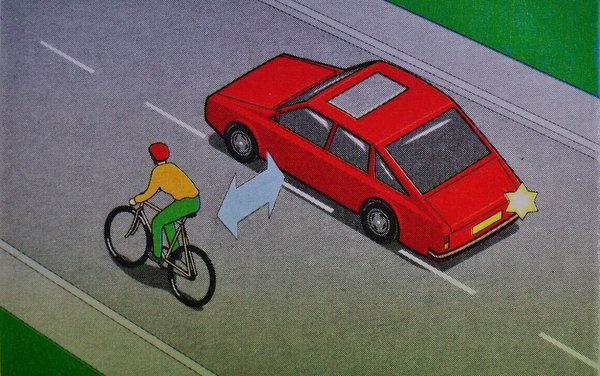 It appears that failing to give enough space to a vehicle being passed is usually prosecuted (if at all) as Driving without due care and attention, not Dangerous driving.

Overtake only when it is safe and legal to do so. You should

give motorcyclists, cyclists and horse riders at least as much room as you would when overtaking a car (see Rules 211 to 215).

When passing motorcyclists and cyclists, give them plenty of room (see Rules 162 to 167). If they look over their shoulder it could mean that they intend to pull out, turn right or change direction. Give them time and space to do so.

Motorcyclists and cyclists may suddenly need to avoid uneven road surfaces and obstacles such as drain covers or oily, wet or icy patches on the road. Give them plenty of room and pay particular attention to any sudden change of direction they may have to make.

The Introduction to my old copy of the Highway code contains this section:

A failure on the part of a person to observe any provision of the Highway Code shall not of itself render that person liable to criminal proceedings of any kind, but any such failure may in any proceedings (whether in civil or criminal and including proceedings for an offence under the Traffic Acts, the Public Passenger Vehicles Act 1981 or sections 18 to 23 of the Public Transport Act 1985) be relied upon by any party to the proceedings as tending to establish or negative any liability which is in question in those proceedings

If a person drives a mechanically propelled vehicle on a road or other public place without due care and attention, or without reasonable consideration for other persons using the road or place, he is guilty of an offence.

Obviously, enforcement is diffcult and often insifficent. One example provides a guideline for the actual separation that is quantitative rather than the qualitative guide in the Highway Code.

An article "Drivers who get too close to cyclists face prosecution", The Telegraph 16 September 2016. says:

West Midlands Police force is thought to be the first in the country to proactively target motorists who flout laws requiring them to give cyclists at least the same space as vehicles when overtaking.

Anyone encroaching inside a safe passing distance, widely considered to be a minimum of 1.5 metres, runs the risk of being prosecuted for driving without due care and attention.

See How to Overtake Cyclists

Just putting you in an unsafe situation isn't (in itself) enough to constitute dangerous driving. You may be surprised at just how badly someone can drive without it counting as obvious - this driver's excuse was that they didn't mean to pass a cyclist, but "somehow" got too close and hit them. Then failed to stop immediately. She was found not guilty.

Careless driving (and causing death by careless driving) has a less strict standard for the driving, but a recent case confirmed that driving into the back of a lit cyclist (and killing them) without being able to give any excuse isn't even considered careless:

Even where there is considerable evidence of dangerous driving, it can be ignored: https://beyondthekerb.org.uk/2016/11/18/somethings-very-seriously-wrong-here/

Some police forces have a policy of ignoring all reports where the driver was merely endangering a cyclist and didn't actually cause injury this time.

For much more on the subject, see http://roadjustice.org.uk/

Not the answer you're looking for? Browse other questions tagged safety road bike-vs-car or ask your own question.

14
If I report intentional dangerous driving to police, will it have any effect?
8
What are some ways to keep biking when you have a car?
7
Is cycling with crystal sunglasses dangerous?
84
How to pass a bicycle while driving a car
21
How dangerous are my worn rims?
5
How to handle motorists' dangerous behaviour with an impassable group?
8
Front tire & downtube clearance - extremely dangerous?
18
Is cycling on this 35mph road too dangerous?