The front shifter is a Shimano integrated brake-and-shift assembly. The front derailleur "groupo" is Shimano SIS. I can pull the cable to make the derailleur shift into third but the shifter doesn't have "enough throw" to do it via the shifter.

Pulled the cover off and threw some lube in it and it appeared to look just fine, but didn't take the closest of looks before having to shutter the shop.

First and second work just fine. Shifts up, shifts down.

Others mentioned cable tension, and you'd think that is obvious, but I just wanted to highlight that quite small changes in cable tension can make a huge difference.

For example, here's a picture of my Shimano ST-EF65 opened up: 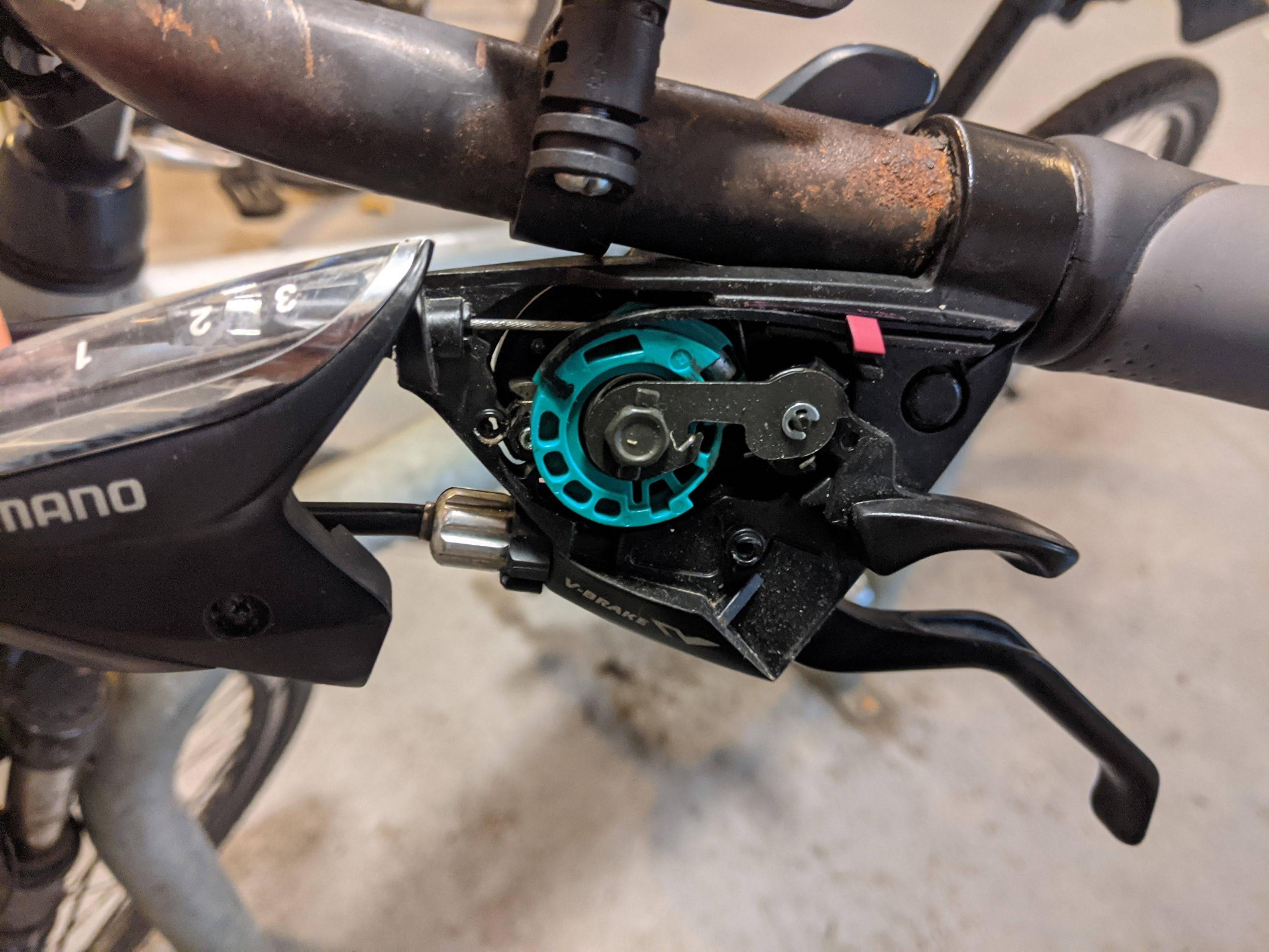 By pushing the thumb lever, I could make the chain go into 3rd. But I could not for the life in me get it to click into 3rd inside the shifter and stay there, and so the shifter would fall back to 2nd.

It had always been a bit hard, but something happened and it became impossible! Here's me trying to do it with my entire hand instead of just the thumb as you would in riding position:

After trying a bunch of things, including spraying WD-40 into the shifter to try and remove old lubricant as suggested in many videos, I finally played with the tension a bit further, and only then got it to work.

Once I was in a working state, I noticed that simply turning the barrel adjuster 5 quarter turns already made the difference between being able to shift or not!

The lesson is: the mechanical strengths and precisions of a cable can be really surprising. You'd think that your thumb is really strong and would be able to overcome them with the brute strength of or hands, but that may not be true.

Soon after getting it to work silky smooth as mentioned previously, and including cable changes, I went for a 4 hour ride on wet conditions, and I could clearly notice how progressively the 3rd was again getting harder and harder to get into, until it got impossible again.

Since the cable tension had been unchanged during the ride, I concluded that the main factor now was actually the front derailleur, which is close to the bottom bracket, and so that is the most likely part where water would have gotten into, as opposed to the shifter.

What must have happened is that the WD-40 I had previously put on just washed off during the wet ride, as it is not a proper lube, mostly a water displacer.

So what I did was:

After doing this, it has been holding for several weeks, including after a few wet rides, so after all, that seemed to be the key issue.

Part of the difficulty of this diagnosis is that the WD-40 doesn't take effect immediately it seems, you have to move the hinges around several times to let it penetrate and remove what as creating the friction.

These are the three hinges I focused on lubing on both sides: 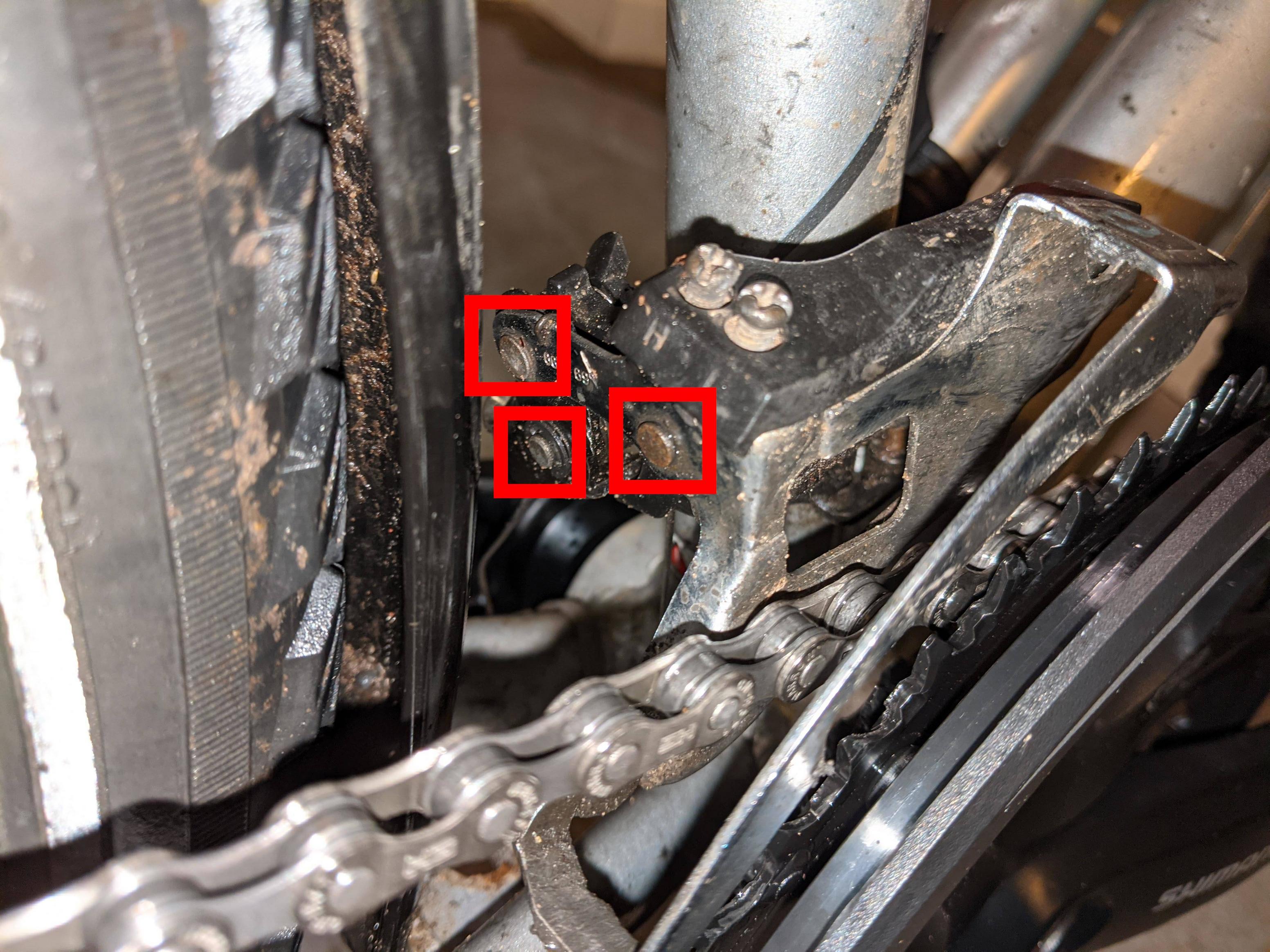 These are the only things that actually affect your shifting mechanically. If those are all proper, something is broken/misaligned/shredded.

the grease inside of the shifter has gone bad. It goes all sticky instead of slidey and the clicker gets stuck. De grease and re grease the shifter.

Having had exactly the same problem I tracked it down to the shifter, and as a previous contributor stated it is the manufacturer’s grease that gets sticky and stops smooth operation. There is a ratchet mechanism in place with a small metal pawl which has a weak spring. The sticky grease stops the pawl (little metal square which engages notches or steps in the main part when the shift leaver is pushed across) from engaging the third notch, it almost drops in but not quite. Fully degreasing the innards of the shifter and then spraying with T85 got ing working smoothly.

But you did not mention, how this happened? Is this a new bike, or did you change the cable? Did this shifter work fine in the past?

I think there is some problem with the basic cable tension, if it is not set up properly then the 3rd gear could be a problem. Try to find a youtube video, where they explain how to set it up properly, it's not that hard, just need some practice/patience.

The shifter has two size cogs in the centre. The first activates 1st and 2nd. To activate the third gear, a spring pulls the lever bar towards the centre (smaller cog). The spring isn't very strong and will stick, not pulling it in and therefore not catching the cog. Clean the area of the spring. I just use oil.

It is the same mechanism with more cogs, for the other shifter for the gears on the wheel.

From what it looks like, it can be the derailleur angle affecting the shifting to the third chainring or, it can be that your derailleur cage has suffered damage and is out of shape or shaved. You can rule out the limit screws if the shifter is getting to the third index, as you've said it is. The cable tension is another possibility but since the other two shifts are good, it's unlikely that's the issue. I recommend you get the bike to your LBS to get it sorted out if you have troubles diagnosing the problem. Just appraise your derailleur cage and it's angle wrt to the chainrings before that, it's likely you get to the root once you do that. And yeah, the cage should be approximately parallel to the chainrings, you know what's wrong if it's not. I hope this helps. :)