Threatening swerving by driver - should I report it? (Canada)

I'm curious to get some opinions on this from other cyclists. FYI this event took place in Ottawa, Canada.

On my work commute, there are about 3 blocks where I ride in the lane with cars because there are no bike lanes or sharrows, and I need to make a left turn in one of two left turning lanes, onto another street which also has no bike lane, and no shoulder. Details below in photo.

During that part of my commute two days ago, I stopped at a red light, in the middle of the left turn lane at the front of a line of several cars. The car behind me honked while we were still stopped, clearly wanting me to get out of his way before we'd even started moving. I stayed where I was since there was nowhere to go: another left-turning traffic lane to my left, and a straight through lane on my right that only buses can proceed through. After taking the left turn, I proceeded in the center of the lane for one block before signalling a right turn, after which I normally ride on the side of the lane because there is more space.

While I was riding the block right after the left turn, the driver who had honked at me pulled into the other lane to pass, then while passing, i.e. while right next to me, quickly swerved back about halfway into my lane, coming within about one foot of me while I was riding, then back out into his own lane. This was clearly meant as a threatening maneuver to scare me. The vehicle did not make contact with me.

I was able to memorize his license plate, make and model, and car color, and I took note of the exact time time, so I can certainly pinpoint who it was in a police report.

So I'm wondering if it's worth reporting something like this to the police, or will that just be an exercise in frustration?

If anyone has any tips or suggestions on reporting something like this, I would appreciate it. (Again, this is in Canada, so any locally relevant tips would be great) 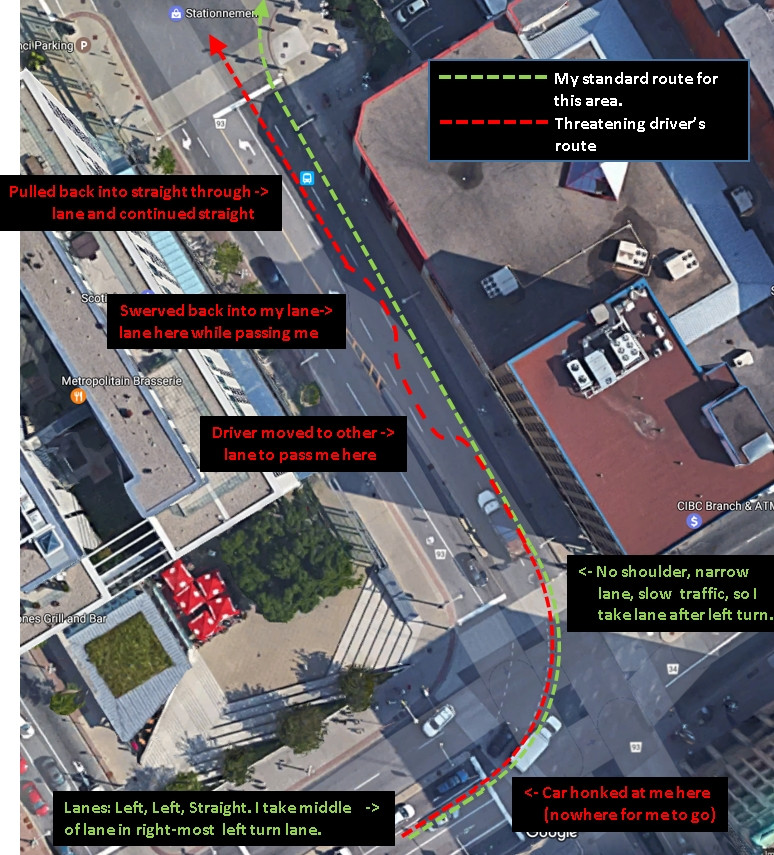 I also live in Ottawa so I can provide some pertinent viewpoints. Yes, you should report it, and yes, it will probably be an exercise in frustration. Don't expect the police to do anything about it. However, you should report it anyway, it might end up in a database somewhere and give them another data point about why it's important to build more cycle lanes and increase driver education on the issue of cyclists. If they notice a trend of complaints against the same vehicle, perhaps they will be able to do something about it.

A little anecdote. I once saw a car ram into the back of another guy's car at a stop light. The driver in question fled the scene. I was able to catch the license plate as I was walking down the sidewalk at the time of the accident. Even though the police were able to find the car, and identify that indeed it matched the description and damage, they were unable to press charges for fleeing the scene because the owner of the car claimed he wasn't driving, and the police therefore didn't have enough evidence to actually issue a ticket or charge the suspected driver.

Without video evidence, there is probably little they can do to actually issue a ticket.

If you are uncomfortable making this turn because of the high amount of traffic and because of incidents like this. You can just head straight on Rideau across the intersection and then wait for the light to change and then go straight across Sussex. This will avoid a lot of traffic and won't add much extra time to your commute. You might even possibly avoid issues like this in the future. It's not great that cyclists have to ride so defensively, but it's better to be safe than sorry.

Hopefully this situation won't turn you off cycling. I've found that most of the drivers in the city give quite a bit of room to cyclists, but there are always bad apples in the bunch.

One last point, if you want to ride the city without having to deal with traffic, check out the CN Cycle for CHEO. You got 2 weeks to get ready, and it's a great way to see the city and help a worthy cause.

Then if at some later point (heaven forbid) he decides to hit you, or tries to scare you again and misjudges things and hits you, the police will have a prior report establishing a pattern of behavior.

Yes, you should report it: Maybe the car's owner will get a nasty phone call or letter from the police. The best case is that it was somebody's kid or husband driving, and he'll loose his keys.

The police should also give you a serious talking to about the serious accidents they have seen between cars and bikes. Having nearly been killed on a bike, I won't go near traffic anymore. Not getting off the road when someone is honking and presumably angry is a good way to get wiped out of the gene pool, regardless of traffic regulations. I knew a girl from highschool who was in the bike lane on a heavy-traffic 6-lane road when someone opened a car door right in front of her. She fell and her skull was crushed by a bus, and my immediate reaction was that she was incredibly reckless to be riding there.

Not the answer you're looking for? Browse other questions tagged safety legal bike-vs-car canada or ask your own question.

23
Passing cars on the right, and later merging into their lane
14
If I report intentional dangerous driving to police, will it have any effect?
8
Must cyclist yield to car turning right across a bike lane into driveway?
20
Bicycling and a Right Turn Only Lane?
6
If a lane is going to expand should the left lane be taken prior to the expansion?
23
How can I interpret the intent of and respond to cars behind me honking?
11
Is a car "perfectly entitled" to turn left around cyclist
22
How to pass another bicycle in a bike lane
5
How to handle motorists' dangerous behaviour with an impassable group?