I've got a steel-framed bike with incandescent lights, probably from the '70s. Unfortunately, despite all my efforts to get it working, the headlamp refuses to work. 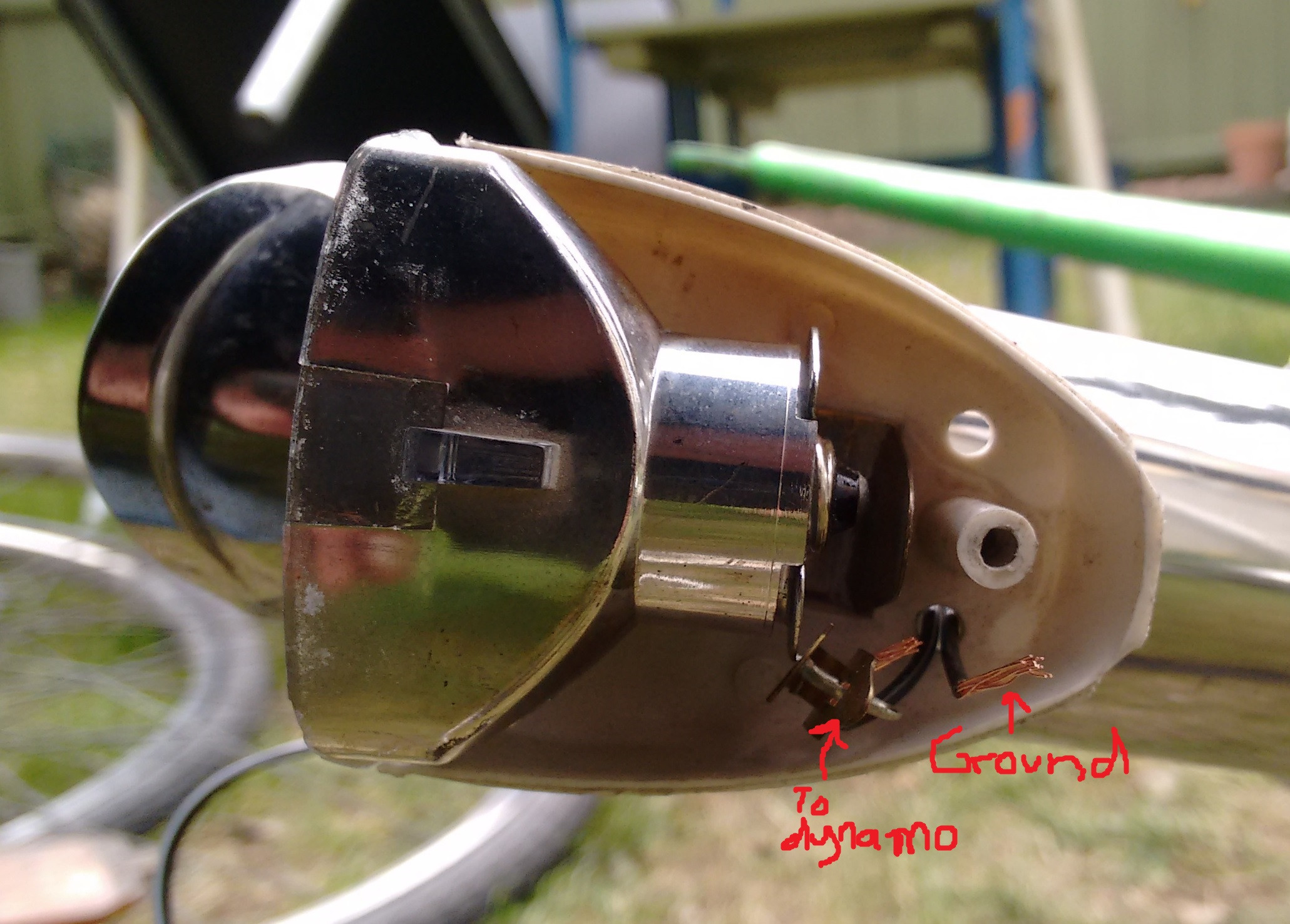 In the photo you can see the way the thing works. When I screw on the top, I bend the metal connector plate forward a bit in order to be more sure that it actually does connect to the bulb.

What might be going on here? — I doubt it could be any kind of short due to the fact that the cabling is brand-new and that the dynamo lights up the taillamp just fine (it even lights up with only a slight turn of the pedals, so it seems to be generating a good amount of current).

The only electrics-specific tools I've got is one of those screwdrivers which has an LED which lights up if the head detects a current. However, I'm not exactly enthusiastic to buy even more stuff for this endeavour because I've already wasted such a large amount of time and money...

† The old wiring was a single, ungrounded wire and I actually don't know what to do with the new ground wire because there's no obvious attachment point for it, so the new wiring is still basically a single cable.

I agree with another post that it is most likely an open circuit to the headlamp. If there was a short your tail light would not likely be working, either. Your screwdriver electrical tester is probably for standard wall power and may not detect voltage at this level. If you could borrow a volt/ohm meter from someone you could sort this out very easily.

Almost every lighting system of that vintage used the frame as a ground, so all you need is a single wire each from the terminal on the dynamo to the headlamp and tail light. It may be possible that you have the wrong half of your double wire connected to the headlight. You can twist the ends of both wires together at each end to avoid this possible confusion. You are correct that the dynamo and the tail light must be correctly wired or the light would not work, so the problem is in the forward part of the circuit.
One other thing to check is the attachment of the head light. Make sure that you have a solid metal-to-metal connection of the headlight to the frame. If you put in a non-metal washer or bushing, for whatever reason, it may be insulating the ground side from the frame. If you want to test the head light, disconnect your tail light and hook the head light to that wire. You will have to rig a way to ground the head light to the frame, but if you don't want to mount it where the tail light was, all you really have to do is hold the head light housing to a bare piece of metal. You may not have enough hands for all of this, but if the head light works in that location you know that there is a problem with either the forward wiring or that the headlight and/or its mount are insulated from the frame. If the head light does not work there, you know then that the problem is with the head light itself.

This is the circuit you're dealing with: 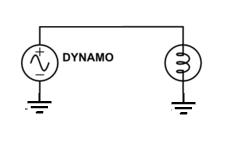 Not especially complex. The hash symbols on the bottom represent a connection to "ground" (ie, the bike frame). The symbol on the left is the dynamo, the one of the right is the light bulb. I don't show the rear lamp, but it's just another light bulb connected "in parallel" to the dynamo (ie, a second light bulb symbol connected to the top wire on top and ground on the bottom).

Note that the second contact for the dynamo is through the metal case of the dynamo, so when the dynamo is bolted to the bike that connection is "made" (so long as you have a metal bike frame).

The two contacts on the light bulb are the tip and the cylindrical metal sleeve that screws into the socket. The tip obviously must make contact with the metal tab near it in your pictures (which presumably is "grounded"), or the circuit is not complete.

The voltage of this sort of unit is around 6V (I forget the exact rating of the bulbs), so a regular wall-socket-style circuit tester is useless -- you would need a "multimeter" that can measure on about a 10V scale to see any "juice" being produced.

Presumably, if you did replace the bulb, your replacement had the same type number on it as the original, or you at least bought the bulb at a bike shop where they would be familiar with the size needed. Hardware stores and the like no longer sell enough of these to get you the right one without checking the actual type numbers (if they carry them at all).

Not the answer you're looking for? Browse other questions tagged repair vintage frugal headlights or ask your own question.