Braking on a vintage road bike

I recently bought a vintage Gitane road bike. I understand that in the 70s and 80s they sold a lot of these road bikes with drop handle bars. Sometimes they came with the extra lever for an easier grip from the top but mine doesn't.

Most modern road bikes seem to have more of a grip from the hood which allows you to squeeze the brakes when sitting upright.

So I am wondering if you are supposed to quickly change to the bottom grip to reach the handle bars? Is that something you get used to doing quickly after some time? Riding in the city seems very uncomfortable having your hands on the brake at all times while looking out for cars. Is that intended to be used more in touring than in busy city traffic?

It is true that the old style brake levers were not as powerful from the hoods as modern ones. The reason is geometry.

The picture below shows how old and new levers move when pulled. With old levers, braking from the hoods requires one to pull back and push down at the same time. As said in comments to other answers, this is doable but not very effective or intuitive. With new levers one simply pulls the lever towards one's hand. The small blue arrows show how brake cable moves. 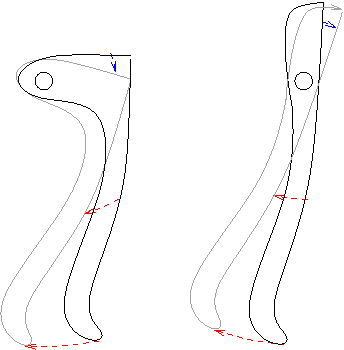 If you want to improve braking on the bike and don't require complete authenticity, there are aftermarket levers with modern pivot placement.

Regular brake levers, without hoods or any additional levers or extensions, are intended to be used from the drops (i.e. riding with your hands down in the lower handlebar position). So, if your riding environment dictates that you might need very quick braking reaction, you would need to ride with your hands down in the drops. Most people - on many typical bike fits - would grow uncomfortable doing this, which is why it might make sense to add...

What you are talking about are extension or suicide levers, which were common in the 70s. These were poorly designed -- they basically keep the cable tension for the brakes partially on, so you don't get the full ability to actuate the brakes.

Modern bicycles have interrupter levers, which push the housing rather than pull on the cable to activate the brakes. They don't have the drawbacks of suicide levers, and you can effectively apply the brake from the interrupter lever or from the regular brake lever.

The brake you use depends on your hand position. For example, if you're on the top of the brake hoods or drops, you'd probably use the regular drop bar brake levers. If you're near the middle of the bar, you'd probably use the interrupter lever. The hand position is a matter of personal preference (nobody's stopping you from riding only in the drops all the time), but depending on how you're riding, some of the levers will be natural one to use.

If you're having issues with reaching the brakes, you can swap on a modern set of brake levers, and even add interrupter levers if you want to. Some levers come in smaller sizes for smaller hands (e.g. Tektro RL341 are a smaller hand version of the RL340).

Back in that era cables came out the top and partially blocked access the brakes. 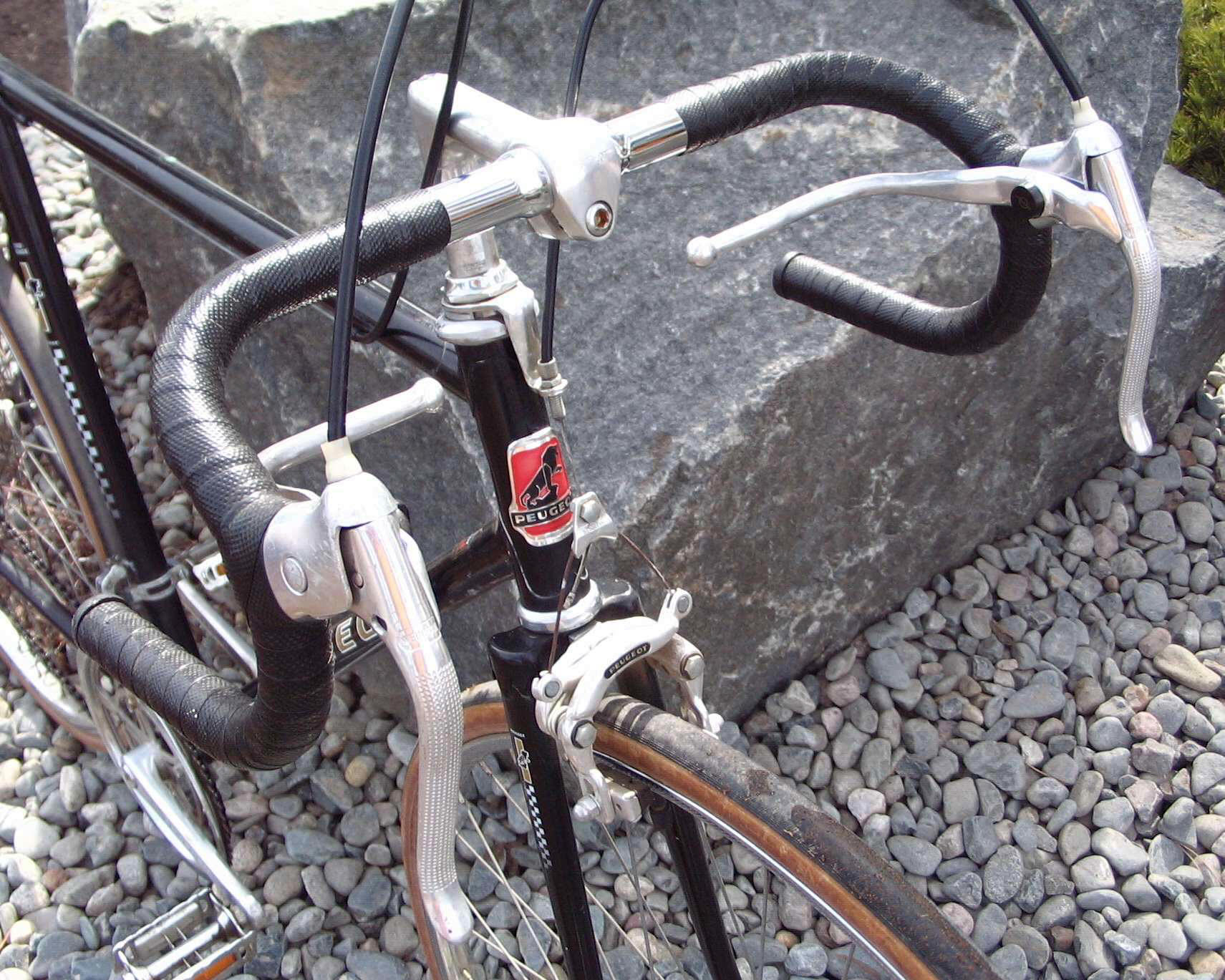 Once the cable was rerouted you have access to the brake from above so the need for extensions went way down. Common position is on the hoods and brake with 2 fingers. is-having-your-hands-on-the-hoods-of-drop-handlebars-safe-for-braking 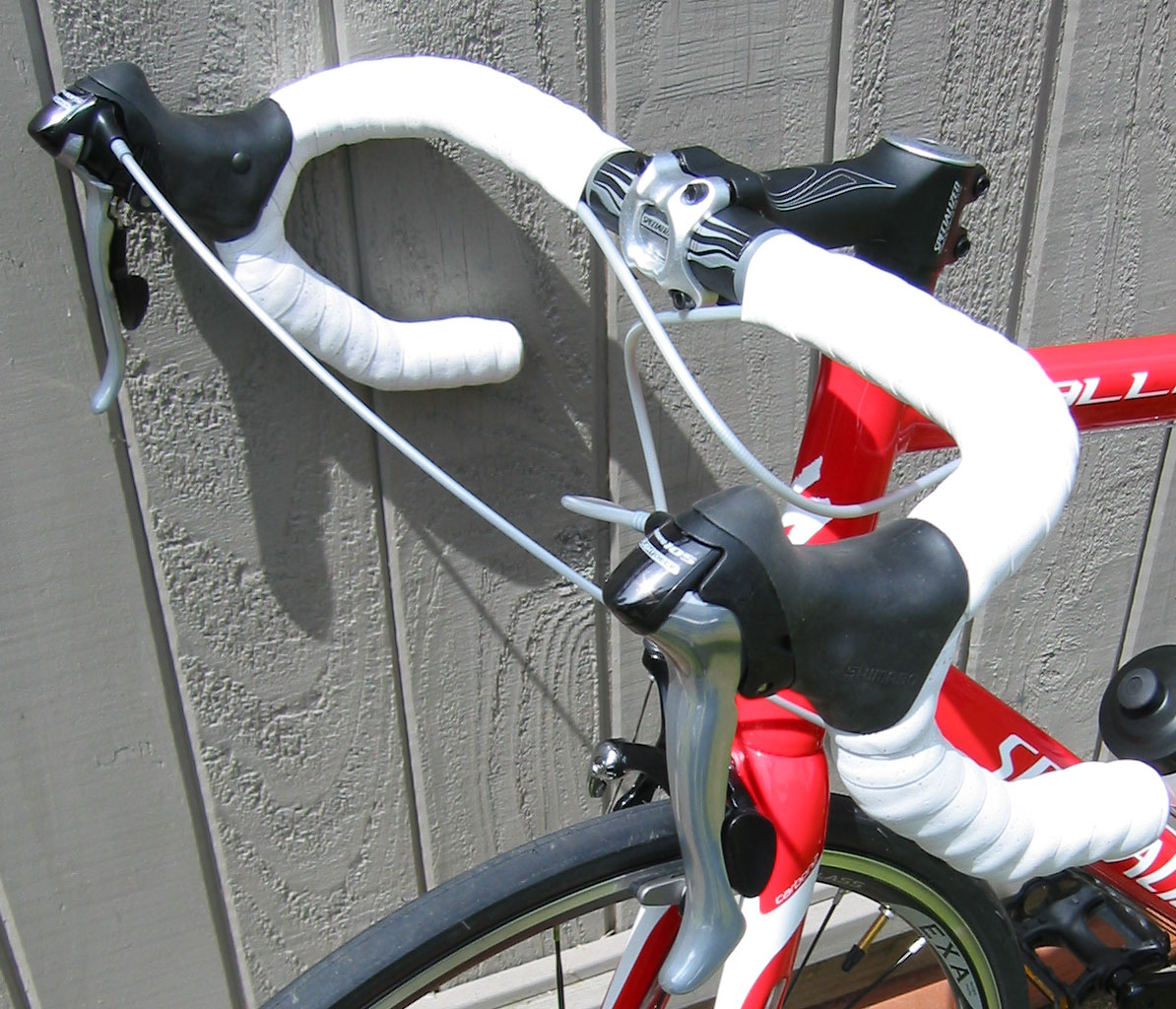 Even despite their low 4:1 system MA and the accompanying huge pad clearances, single pivot sidepulls might still occasionally need a drop of oil at the interface between the pin and the sliding return spring. This oil makes the coefficient of friction at this interface predictable and thus returns the brakes to good centering.

Because V brakes and cantilever brakes have reliable centering, they can be run with the low pad clearance needed by 7.5:1 MA. The dual pivot sidepulls solves the centering issue in another manner: it has forced centering and still the same old spiral section location problem in the return spring. As a result, dual pivot sidepulls cannot track a wobbly wheel like one that is severely out of true due to spoke breakage.

Not the answer you're looking for? Browse other questions tagged road-bike brakes brake-levers interrupter-brakes drop-bar or ask your own question.

73
How to use drop handlebars properly?
26
Is having your hands "on the hoods" of drop handlebars safe for braking?
7
Brake levers for riding in upright position
0
What is the mechanical advantage of mechanical rim brakes and levers?

21
What height should drop handlebars be - relative to my saddle?
7
Dealing with very juddery cantilever brakes
4
Do brakes provide full power when used from the hoods?
1
Vintage Campagnolo hood
2
Questions about shifting from a new road cyclist
4
Interruptor Brakes on a Road Bike
7
How to improve braking with hands on hoods?
1
What make road bike is this vintage 1980s bike?
2
I think I bought the wrong bike