I bought a power meter. I understand that you should do an FTP test to work out your threshold. But until I have time to do this, could I take a reasonable guess from a recent 35 mile road race?

These are the graphs from Strava, for the estimated distribution, it says average 230W. Is this a good starting point? Or should I go higher or lower, or should I ignore the graphs because Strave is just trying to guess it from speed/hr. 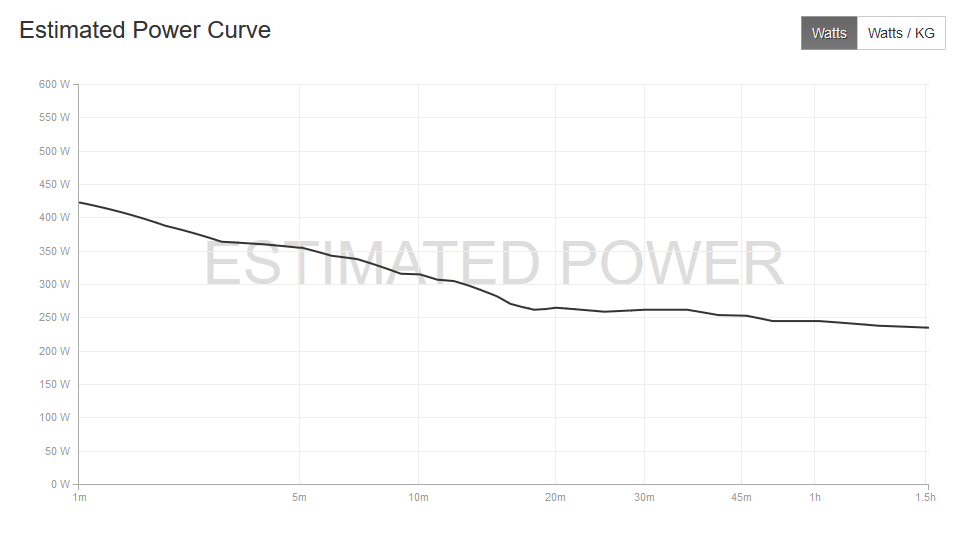 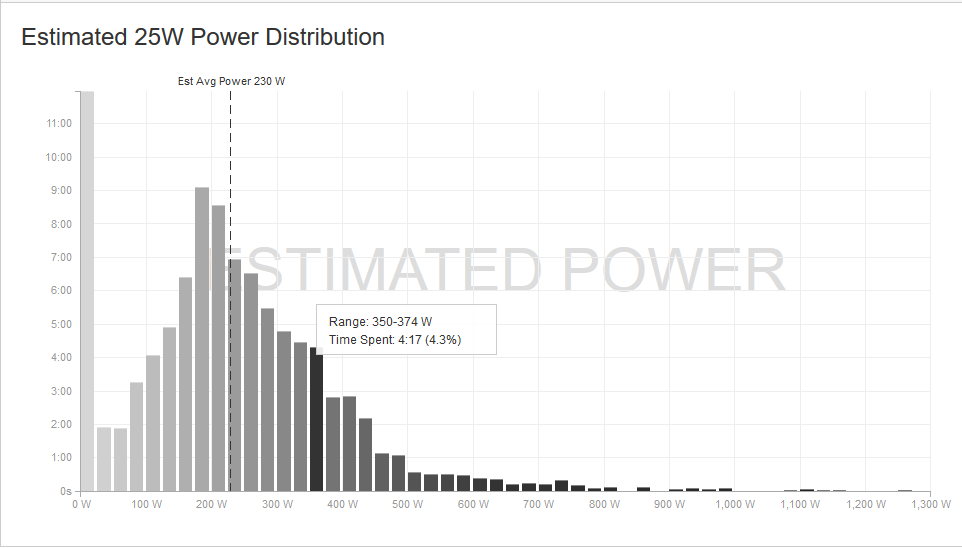 I raced the same course again, here are the same graphs from strava. It was a much windier day, and my finish time was just under 3 minutes slower than the last race. 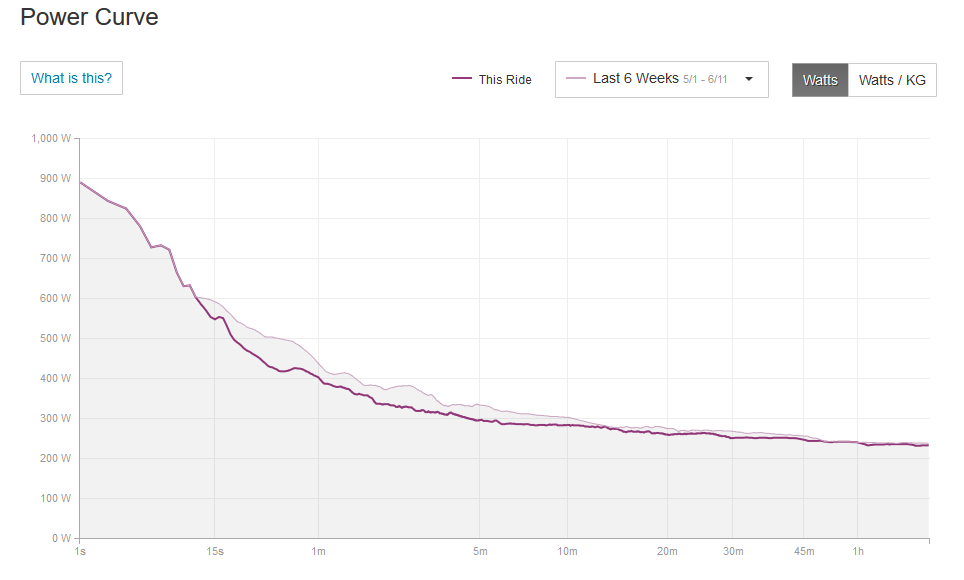 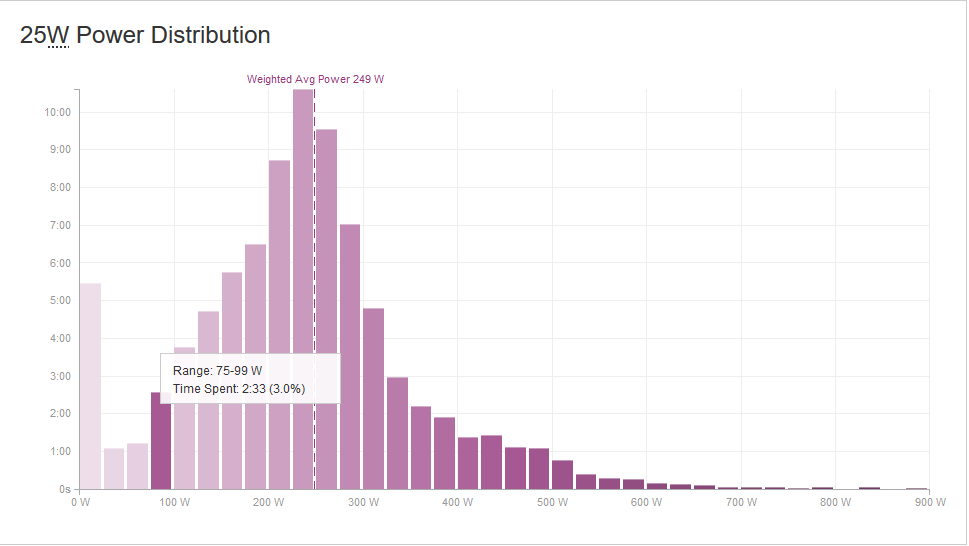 You own a power meter - just fit it and go for a hard ride.

For others who don't own a power meter (and lets face it, they're not cheap)

Its a poor data point, but a chap at work has a power meter and he can compare this number with strava's estimated power. We've compared ~three races and strava's number was high or low by up to 30%

Another analogue solution is to ride hard for ~20 minutes to the point you can say words but not a whole sentence. Then use Strava's estimator on that segment. Repeat.

If you have a Heart Rate Monitor, try and hold your heart rate at around ~90-95% of your rated maximum, which is about 220-(your age in years)

Perhaps an even more precise way of determining your FTP, yet one which still doesn’t require any formal testing, is to examine your normalized power during hard ~1 hour mass start races.

Assume you used your power meter at the race, you should look at your estimated power curve (first figure). This shows how much power you can put out on average over differing durations. If you look at the 1 hr mark, your FTP is around 250 watts. This may be an underestimate depending on how hard of a continuous effort your were putting in. Your overall average wattage for the ride (230 watts) is not what you want as the activity was longer than an hour. FTP is the maximal work you can do in an hour.

About the best you can do is to set a some limits to an FTP estimate.

If the Strava data was not the actual power meter data, then as Criggie says the short answer is no, you can't rely on that at all.

As an aside I thought that files uploaded to Strava that had power data defaulted to showing the real power meter data rather than an estimate.

If it is the actual power meter data, then you can probably at least narrow down a lower limit for FTP (provided of course the power meter is of a reasonable standard and you have used installed and used it correctly, e.g. ensuring a torque zero was performed before the race).

As Rider_X mentioned above - the first lower limit will be the average power for the whole race (~1.5 hours), so your FTP will be higher than 230W (assuming the data is from the power meter and not a Strava estimate).

The next lower limit will be your average power for about an hour, which in this case is ~250W.

If you have some analytics software such as WKO4 or Golden Cheetah, then it can work out for you what the peak 1-hour Normalized Power was. That will be closer to FTP than average power. Peak 1-hour NP may still be lower or higher than FTP depending on how hard the race was but it will not typically be higher by any more than 5%.

So if the race wasn't that hard, then peak 1-hour NP is not going to help you much except to bump up the lower limit of your estimate from the 250W average power value.

However, if the race was hard then your FTP will likely be somewhere between 95%-100% of your 1-hour maximal Normalized Power.

That then will at least give you an estimate to use until you have better data to improve your FTP estimate.

In the meantime just collect your data and learn to use the meter correctly - it can be helpful later on the be able to assess the nature of the training you currently do as you begin to learn what changes to make to your routine.

Here's an old but still popular post of mine about ways to estimate your FTP. Number 5 on the list is using the Critical Power model, which can be augmented nowadays by use intelligent of the newer power-duration models (of which CP is an example):

Not the answer you're looking for? Browse other questions tagged power strava or ask your own question.

1
Can I get my sprinting ability back?
2
Good cycling goals?
1
Can single-sided Power meters cause unnatural Bilateral asymmetric pedaling?
1
Does changing gear relation produce different speed at same applied power?
2
Does Strava display live watts while biking?
8
What method or algorithm is used for computing power curve on Strava?
1
Most effective > 200 mile ride training
1
How to interpret Strava power curves?
0
How does Strava treat power data while resting?
5
Giant power meter left/right balance