How hot does a bicycle disk get? I’ve been working on heat rejection for auto/truck disk brakes with some success. But the disk temperature needs to reach 700 degrees to be effective. This seems a bit toasty for a bicycle disk. Any thoughts?

As this pops up #1 on "mtb brake temperature" search, let us continue the answer of @Emyr. On descents the potential energy will be converted into the heat of the braking system, and then dissipated into the air. There are two main physical processes going on:

Now the heat transfer coefficient is actually a "capability" depending on many things (like geometry), but also - and mainly, mostly linearly - on the airspeed. There are different values you can find, but I include some typical ones below,

Now these processes play as follows. On a long descent the heat capacity will quickly be saturated, and all the potential energy lost will have to be radiated away, i.e. the temperature of the disc will go up until the point where the disc radiates away as much as is generated from the descent. Assuming 800W generated (typical biker on ~16kmh descent on somewhat steep slope, and both brakes working), and a disc brake of (2-side) surface (both sides together) 5 dm^2 = 0.05 m^2 disc area, we get to

Of course, should the slope be less steep, and allow for same potential energy generated at twice the speed, we would get 114°C. That's why it is the steep slopes that "kill" the brakes.

Now before the steady state is achieved, the disc will store the energy as heat. Assuming the disc is 2mm in diameter, so 0.05dm^3 in volume, so 400g of steel [it is usually much less due to perforations], with heat capacity of 500 J / (kg * °K) we get roughly

so without the convective losses the disc would warm up by 2°C per second. (Incidently, if your disc is worn out, say to 1mm, it will warm up twice as fast.)

One can now play with different "braking strategies" etc. but almost for sure the following will hold:

Let us finish with a view of braking/working disc, and the source of these simulations, 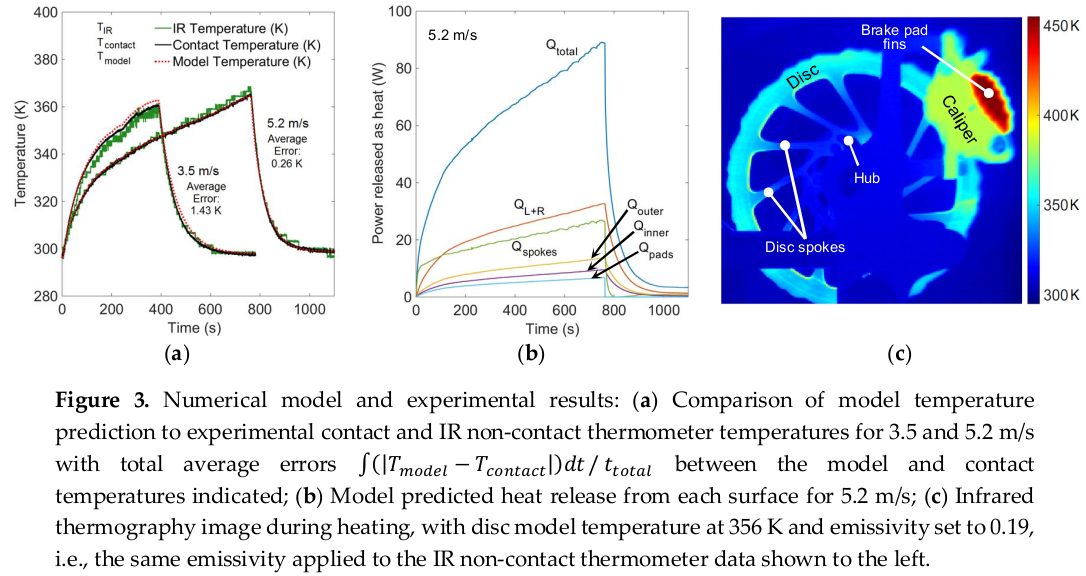 To simplify this a bit, I'm going to ignore rolling resistance and aerodynamic drag, so all the work is done by braking. Also, when you brake hard, the front brake does almost all the work, so ignoring the rear brake to simplify the scenario.

A basic 180mm steel brake rotor weighs about 150g and the specific heat of steel is about 0.5 J/gK (Joules per gram-degree), so converting 5kJ of kinetic energy into heat in the rotor should increase the rotor temperature by 67 degrees (C), assuming none of the energy is absorbed by the brake pad, caliper body or brake fluid (not realistic, but useful to identify an upper bound for the rotor).

To maintain constant speed on an even slope, the change in gravitational potential energy must equal the heat energy extracted by braking (plus other sources of friction and drag that we're ignoring).

Descending a 1 in 10 slope for a 100m distance gives a height change of 9.95m (not 10m, because the distance is along the hypotenuse).

This would increase the rotor temperature by 130 degrees.

Heat Dissipation and the limits of my knowledge

The two calculations above don't have a duration because I haven't allowed for heat loss during the event; here are some of the complicating factors:

Modelling heat in rotors is sufficiently complicated that it is a topic used in Engineering project assignments for university students, and the software typically used to perform the calculations is very expensive.

10
Cooling down brakes and rims

9
Disc brake lost power
1
Unable To Adjust Mechanical Disc Brakes Properly
4
Are my cable disc brakes knackered?
1
V-brake to disc brake
0
Rear disc brake
2
New disc-brake, rotor, pads; terrible braking performance
0
Alternatives for mineral brake fluid / oil (in a pinch)
2
Where is the grease on my front brake caliper coming from?
2
Why did I lose braking power after hitting a curb?
8
What contributes to disk brake noise when wet, and how could I minimize it?