I currently have a Trek 3500 Mountain bike which I use for commuting 34km total each day. I did put on thinner tires. My average speed is about 20 - 22 km/hr I'm tired of the leaning forward all the time and was considering getting a "comfort bike" where the handlebars are higher than the seat. This would provide a much more enjoyable view/ride. I'm thinking something like this: http://www.primeauvelo.com/en/cypress-dx-42604-0014040.html

I commute on 28 km/day at 22-25 km/h average. I normally use a city bike, where I am not exactly leaning forward but neither sitting at 90 degrees. 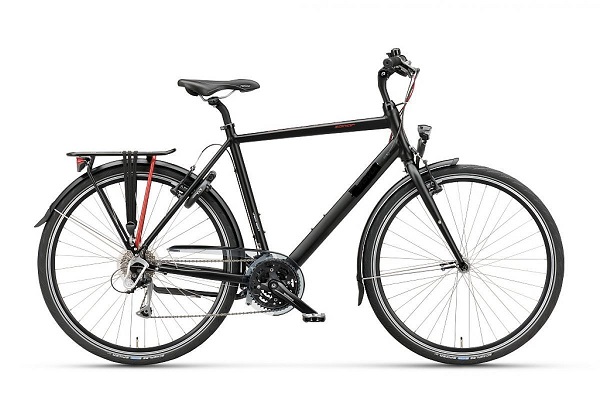 However, I had to use for an entire week a different model, where I was more "seated": 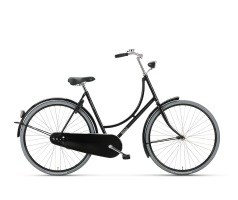 though at the beginning I was feeling more relaxed, on the long run it was not that comfortable: keeping a decent pace was a struggle (drag and head wind, feet slipping on pedals), and also the steering was far less precise than I wanted, resulting in slower rides.

Maybe see if you can borrow such a (or similar) bike and use it for a week or so, before switching to it.

My experience of comfort bikes isn't good. I find them less comfortable. That's as someone who learnt to ride on a cheap mountain bike (probably too small for me) and then a hybrid. A shorter, higher stem can make a huge difference to your existing bike and is cheap to try, but you'd still have the suspension and I can't see whether that locks out.

I was very happy with a hybrid on a similar length commute to you (with hills). My average speed (including stops for junctions etc.) was similar, but there were very few stretches where the bike was the limit - traffic and hills were.

Your assumption of all hybrids having the same top speed isn't quite right:

The upright sitting position of a comfort bike is likely to make it slower - even at the speeds we're talking about air drag is relevant, and it's not a position designed for efficient power transfer.

You're going to need a good test ride on the right sort of roads, ideally measuring your speed, if you're going to get something in the sweet spot between speed and riding position.

I strongly recommend you keep your hybrid bike, since comfort bikes are generally quite heavy/slow. After you get used to a faster bike, especially if you use clip pedals, it is hard to use a comfort bike. Perhaps you could try to have a good bike fit on your hybrid to improve your comfort when cycling.

Not all hybrids are the same. There are some $2500 carbon out there now that will clearly outperform a a $600.

I don't recommend a shock as it eats up pedal energy and does not add to comfort in my opinion. Run larger tires (like 35 - 38mm).

In the $650+ range you find a lot of nice hybrid / city / fitness to consider. They are are going to perform better. If you even care about performance.

Hybrids bikes come in various flavors between being more road-ready or more trail-ready. Take a look at any manufacturer's website and see the various hybrid models they offer and see the difference in components like tires, gear ratios, component materials, and frame geometry. Some hybrids are road-bikes in disguise and while others are just a pair of knobby tires short of a "mountain" bike. You seem to looking for one that is at least 70% road oriented.

You can also consider changing your handlebars to allow you to sit more upright on your current bike. Something like a northroad style bar brings your hands further back and higher up. I switched to one like this on my commuter bike. http://harriscyclery.net/product/sunlite-north-road-style-handlebar-aluminum-2765.htm

Not the answer you're looking for? Browse other questions tagged hybrid-bike comfort or ask your own question.

48
Are slick tires worth it for commuting?
15
How can I increase my speed on my hybrid bike?
5
New Saddle For Gravel Bike
1
Is it harder to ride a comfort bike on a paved trail than a hybrid?
3
Is it a problem to have tires of different width?
1
How durable are road or hybrid tyre tubes compared to mountain bike tyre tubes?
3
Is it cost-effective to upgrade an old-ish Giant Escape R3 commuter bike with entry-level branded parts (wheels, drivetrain)?
4
How do I fix the comfort of my bike?
4
Narrow or comfort saddle?