I am upgrading from a Shimano tourney bike and newbie so please be nice to me .. lol :)

I ride trails and easy bike paths and some roads. For cross country - Semi road/ Semi mountain type riding, which is better? - A 1X11 SRAM/Shimano system or do I need 2 gears in front with a front derailleur? Considering ease of pedaling, shifting and more slower shifts in gear, isn't a 2X10 set up better?

Neither system is better than the other. In some situations, 1x is better, in others, 2x is better. As cassette range expands, effectively because the largest cog is getting bigger, the advantageous of 2x (or 3x) are decreasing. (SRAM just released a 1x12 with a 10-50 cassette, which is probably the nail in the coffin of 2x in the top end gear sets on MTBs).

A large reason for popularity of 1x in Mountain bikes comes from full suspension frame builders. By loosing the front shift, they free up space around the already crowded bottom bracket area. This is a very high stress area of the bike, throw in pivots for full suspension and life gets difficult. Removing the derailleur and it goes from 'impossible' to 'nearly impossible' to make a better frame.

Manufacturers love 1x as it lowers the total cost and complexity of an installed drive train, and marketing love it because is something thats clearly 'new' and therefore must be 'better' Meaning there is cost saving to be had, that does not need to be passed on to the consumer as it can be sold as an improvement.

Keep a very close eye on costs - upgrading from Tourney means the bike was not really high spec to start with. Its likely a 1x11 gear set will cost more than the bike is worth, and provide no significant advantage over upgrading just the rear derailleur and shifter (Cassette, chain, shifter cables are really consumables).

More gears are not necessarily better. Adding a second (or third (or fourth!)) chainring gives more gears, but a lot of them overlap or fit between existing gear ratios.

Focusing on the top half of this image 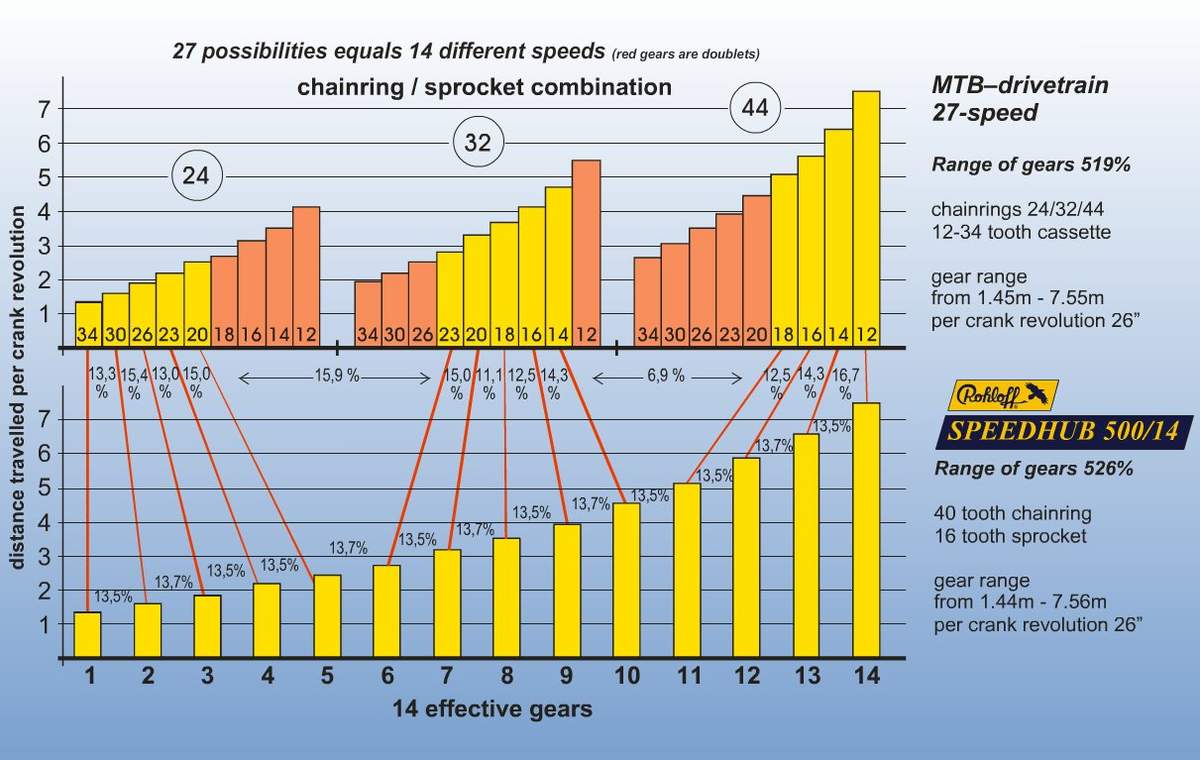 On my triple-equipped road bike, I will and do use the highest and lowest gears available, so an equal 1x setup would have to have a cassette with a monstrous range.

Not the answer you're looking for? Browse other questions tagged shimano gears derailleur sram derailleur-front or ask your own question.