Yesterday while riding my Surly Ogre around town I noticed that it was making a weird metallic popping noise on the left downstroke. When I got home to take a look I was rather surprised to find that the right chainstay had broken completely free of the dropout at the weld (see pic at bottom).

The frame is out of warranty, so my options seem to be a) buy a new frame or b) try to weld it back. I know nothing about welding, and there is no frame builder in town, but a local machine shop said they could sandblast and TIG weld it back together for $120. My question is a) is this safe and b) is it worth it? The frame set me back ~$440 when I bought it new 5 years ago. So the repair option saves money, but I'd want to be sure the same problem will not arise again in a few years. Also I'm unsure whether it can be rewelded sufficiently strongly.

More generally, what I can do to prevent this from reoccurring? I weigh 175lbs, I've never crashed the bike and have used it exclusively for commuting and ferrying groceries. Back when I built it I sprayed the inside with cosmoline, and it's been kept in a dry climate, so frame rust also doesn't seem like an explanation. I'm puzzled as to how such a beefy bike (to quote Surly's own marketing copy) could fail so catastrophically in a fairly short amount of time. 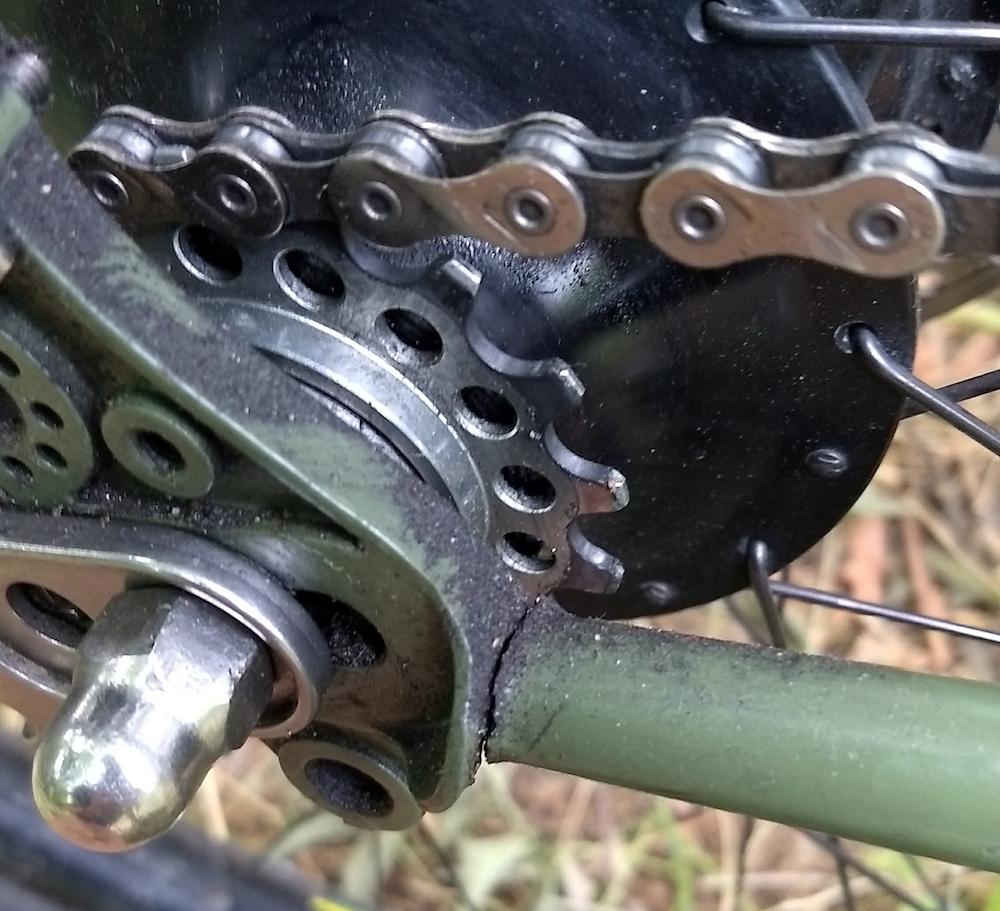 Get in touch with Surly even if it out of warranty. The worst they can do is say no, and even if they won't fix it, they should be able to offer advise on the the best way to proceed. They live or die based on peoples perception of the brand, so have a vested interest in helping you resolve this kind of problem.

Any competent engineering shop should be able to make a reliable repair on Cromo. frames.

Just getting it welded by a non-framebuilder could have a couple caveats:

What I would do if Surly doesn't offer anything is send this pic to the nearest reputable framebuilder who does TIG steel mountain bikes, and ask what they think.

A side note is that one of the big questions here is what the dropout alignment was like during the life of the bike so far. Poor dropout alignment often causes failure in this area, as the materials are dealing with a permanent stress from the QR or axle nut forcing them parallel, and the stresses of being a right chainstay are added on top of that. It's sometimes the dropout itself that fails in these cases, but the one in question here is on the strong and totally inflexible side, so the joint would bear the brunt of it.

for what it's worth, I've gone through 4 Surly Troll/Ogre frames over the last four years, all four have cracked at the chainstay (twice on the drive side, twice on the non-drive side) weld. They just did a new redesign in 2017 on both models and I had high hopes - but the 2017 Troll I got after six months of backordering and then trying to get it warranty replaced by Surly, it lasted 2500 miles before it broke again. I'm not bothering to try to get it replaced again (it seems harder and harder to get it replaced under warranty each time - I'm done with wasting my local bike shop's time trying to get it done). I'm going to have the local bike shop (which also does frame building) blast the surfaces, weld it, braze on a brace around the chainstay and do the other side while they're at it. (I might not be using the terms right, I don't know anything about welding myself.)

I don't know what is going on with their manufacturing, but the chainstay/dropout weld is an incredible weak point on the troll/ogres. I would have never bought a Surly bike if I'd known beforehand, or how much time it would take us to get them warrantied each time we had to do it. I've given up on them, even though the design of the bikes is perfect for me.

(and the time the chainstay on my Ogre broke, it was 40 miles from home as the sun was setting and I had to get up & down a 2200 foot mountain to get back home where there was no cell phone service or cars around. I was very displeased with surly on that day in particular. The descent was even harder than the ascent.)

It is a very poor design: the seatstay does not intersect the rear axle but rather strikes the dropout about 2 inches behind the axle. This creates a rotational force on the dropout. The reason it always happens there is that the dropout/chainstay joint on the non-disc side has the most leverage. On the disc side the dropout extends much farther down the chainstay so the leverage is much lower. While there is leverage on the seatstay/dropout weld, the leverage there is also lower. Junk it. The design is flawed. They moved the seatstays way up to make room for the brake caliper and for looks which I think is dumb.

You have a few options.

Not the answer you're looking for? Browse other questions tagged repair commuter steel crack or ask your own question.

0
FSA Gossamer Crank Spider cracked
5
What can I do about a cracked frame?
0
Cracked a steel fender today. My fault or design problem? And now what should I do?
7
Cracked seat post
8
Is this a cracked frame?
6
Cracked frame riding into the back of car, what's salvageable?
5
What is the potential danger of riding bicycle with cracked chainstay and how to fix it?
2
Is this cracked?
8
Is My Rim Cracked?
2
Vertical mark on chainstay?