Often it is argued that an 8 or a 20 minute effort can be sufficient to estimate Functional Threshhold Power (FTP), an indicator of how many watts a rider can put out over the course of an hour (or 40 minutes, depending on who you ask).

For the 8 minute effort, an additional 5% (for a total of 10%) is taken off the total wattage over 8 minutes.

My question is as follows: does the reverse also hold? Suppose I do an 80 minute test, or a 160 minute test, will a respective 5 or 10% increase in the wattage over that period be my FTP?

If we consider a mean maximal power curve, a plot of the maximal power one is capable of sustaining plotted against duration, it is generally pretty flat from 8 minutes out to many hours. It's not of course totally flat and there are various individual factors that influence the shape of the curve. The slope is greater at the shorter duration, and it has more individual variability there. 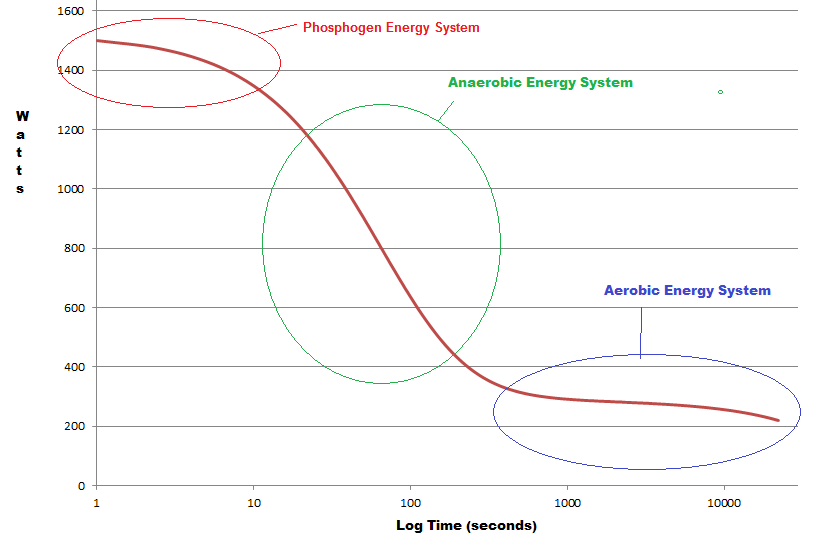 Now while this is the general shape of a MMP curve, there is individual variability and I chose this image as it gives some clues as to why, namely the contribution of the various metabolic energy systems that supply the energy varies depending upon the duration of a maximal effort, and also upon the unique physiological characteristics of the individual.

4
How accurate are indoor trainer power meters?
1
Can I get my sprinting ability back?
2
Good cycling goals?
5
Power to weight, FTP and Terrain Profile
2
Estimating FTP from Strava analysis