Bicycle acts like it's braking when I walk it

When I walk my bicycle, every few feet it stops like I've pulled the hand brake. It will roll some more then stop again. What do I need to do to fix it?

I'm assuming you have rim brakes.

Lift each wheel in turn off the ground and spin it. Does it appear to snake from side to side as it spins? If so, your wheel is out of true (it's no longer a disk but a sort of round Pringle) and it's catching against the brake pads at some part of its wobble.

If the wheels look OK when they're spinning, place the bike back on the ground and try to push the bike sideways by putting your foot against the axle. Does the wheel wobble against its mounting? If so, its bearings are bust.

Both of these are things that only an experienced bike mechanic would have the tools and skills to fix, so unless I've missed something, you're going to have to take it to a bike shop.

If it is an issue with the rim itself being misaligned this is something you could fix yourself if you feel confident. You need a tool called "Spoke key" or "Spoke wrench", which allows you to fasten, and unfasten the spokes. My city has a bike club (German ADFC) which offers a public workshop twice a week, where you could lend the tools (and get some advice). I did the same thing to my bike, and it was not too difficult. If you cannot lend, it costs about 10 Eur.

From the front, the wheel would look like this: 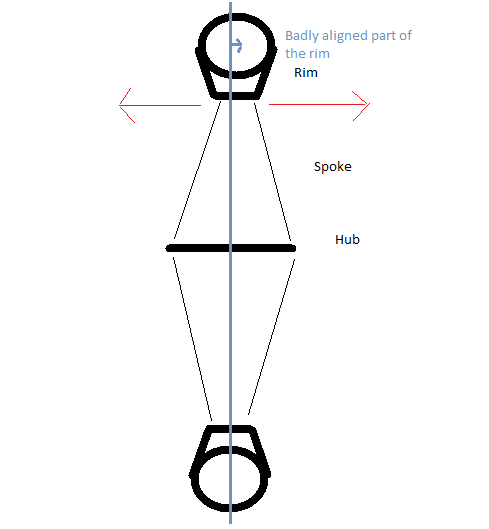 Unless the rim itself is damaged, this usually allows to correct the issue.

Disclaimer: Because it is really bad if your wheel breaks while you are riding, exercise caution after having done this repair. If you have any doubts about it, let an expert do it.

Not the answer you're looking for? Browse other questions tagged maintenance brakes or ask your own question.

14
Front wheel "shudder" or "pulse" when braking
2
When the the caliper brakes are applied, the pads barely move at all
0
Brakes feel like they are not even there on my used road bike. How can I fix it?
3
Brake hard on new cycle
4
Bicycle is harder to pedal when standing
4
How do I know when it's time to pump up my tires?
1
Is it normal for a bike to skid even after both brakes are applied?
31
Braking one-handed to signal down steep traffic-heavy slope