Rear Tyre torn at rim - what was the cause?

I had a blowout the other day. On investigation, it was a C-shaped cut in the tube. It patched okay and on reinstalling I found this culprit : 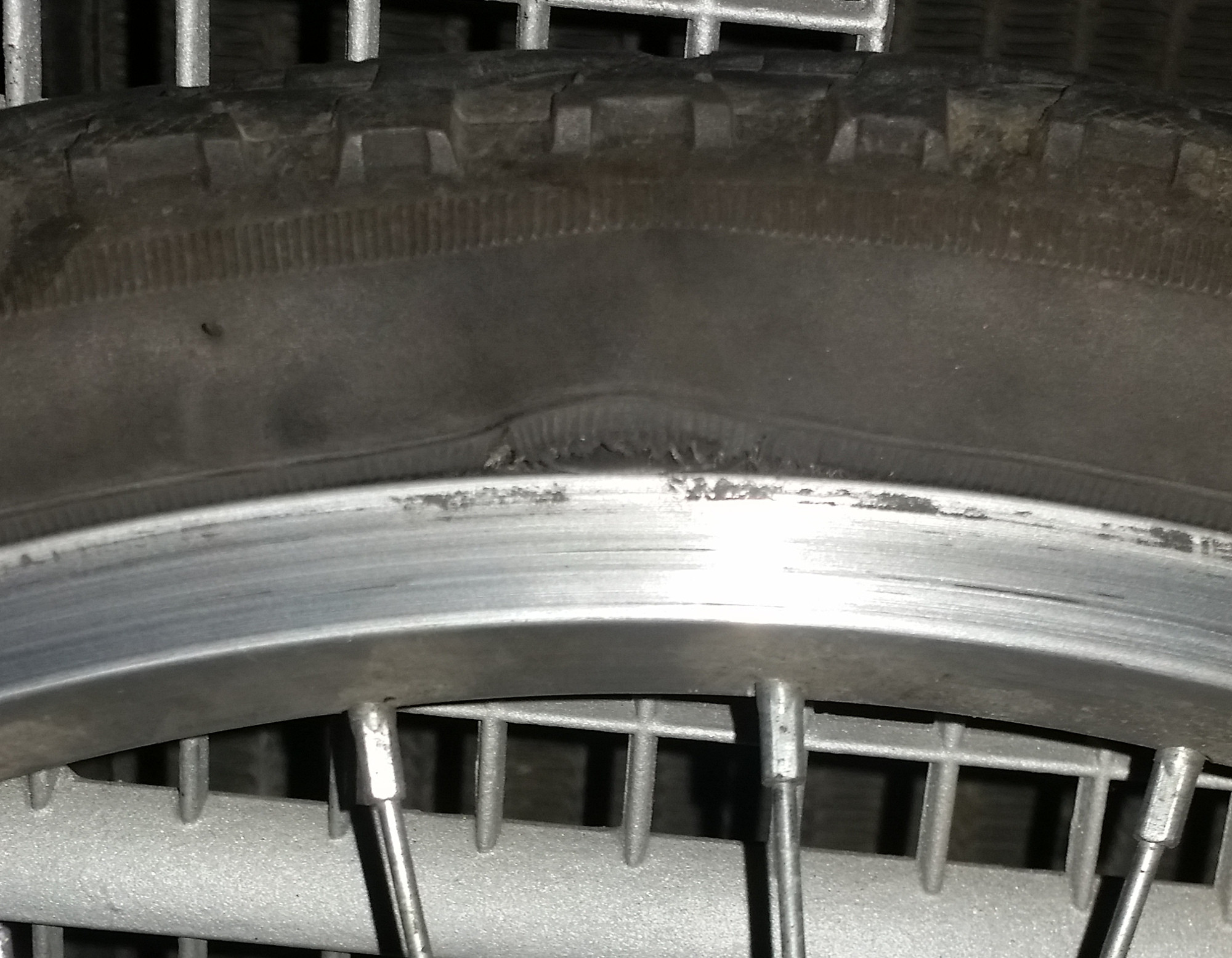 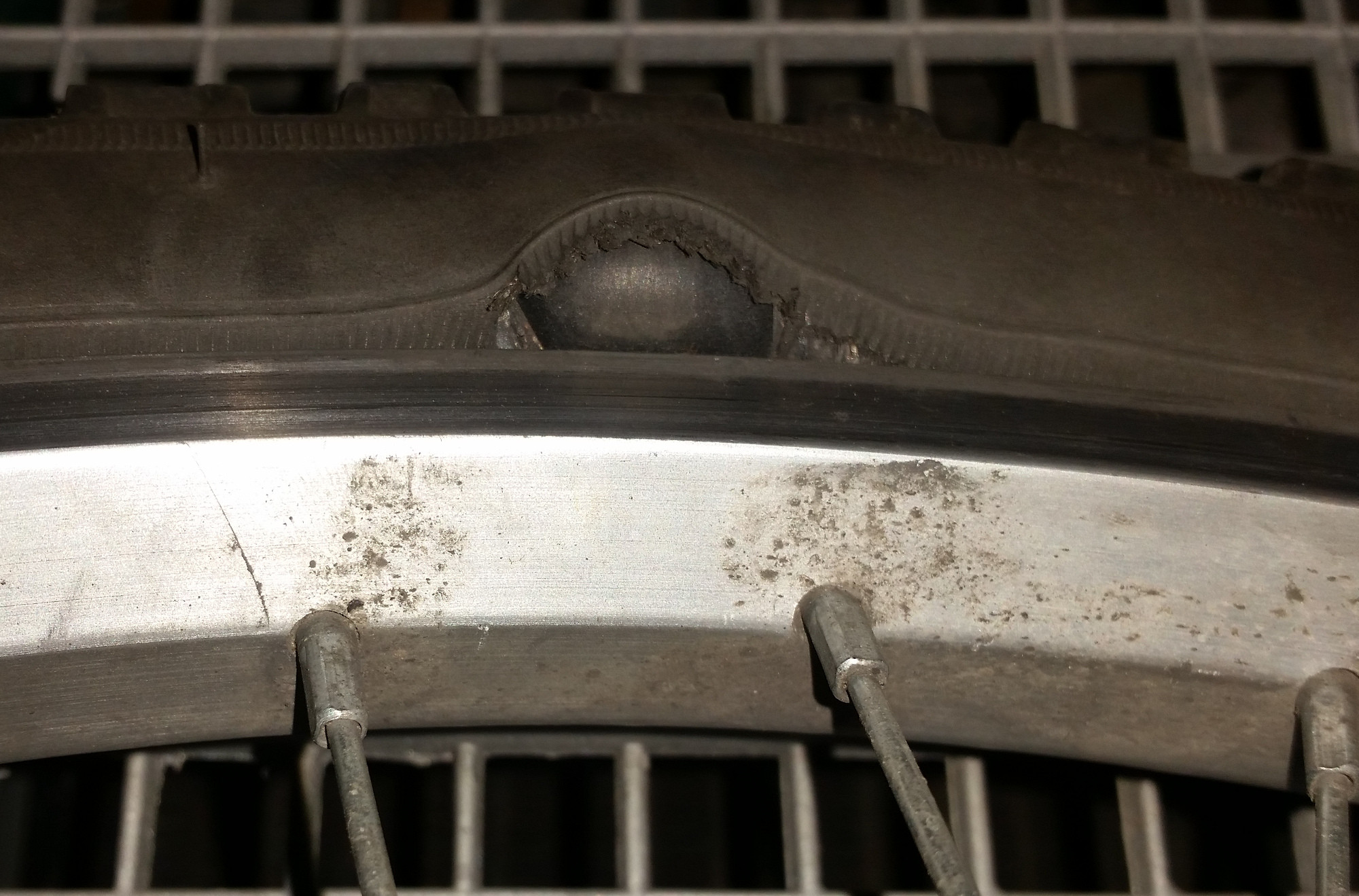 The tyre is not new but its not old either - plenty of tread left.

I've seen very old / weathered tyres where the rubber has deteriorated and the bead has separated but the cords remain. However this has torn about 20mm worth of cords.

The tyre may be too wide for the rim - but its the original tyre which came on this bike from new.

There is no noticeable roughness on the rim at any point, so abrasion seems unlikely.

Lastly, I do occasionally use this bike as a tractor to tow a trailer. Its done 50km towing some amount of weight on a rear-axle mounted trailer, and despite moving some decent loads the nose-weight of the trailer has never been more than 10-12 kg (20-25 libs)

Question What was the cause of this tear in my tyre?

I've had a few tyres (well... 3) split like this. I'm pretty sure it wasn't the brake block rubbing.

In one specific case I went through a pothole and heard a clunk as the tyre flattened out completely. A few days later my tyre split like this and there was a visible mark on the rim at the same point that would have been from the pothole. I think the other 2 cases were less dramatic versions of the same thing - the tyre flattened out due to a pothole, bump or stone that caused a small tear that gets flexed back and forth until it finally gives way.

You mentioned that it's your rear wheel and that you tow a heavy load. Rear wheels in these setups get a lot of lateral (sideways) loading from the trailer.

This can put stress on the bead that it's not designed for. A higher pressure would help stop the tire from rolling side to side -- but you've said you're already on the high end of its pressure range. Maybe look for a tire that is known to have stiff or reinforced sidewalls.

I'm going to call herniated sidewalls: a "criggie" from now on.

I've lost a (front) tyre to similar damage caused by a sticking pressure gauge. At a rough estimate I put 120psi into a tyre rated for 85 after dealing with a normal puncture (broken glass in the tread). That pump stays on my frame in all weathers but it's not the one I use for topping up or planned changes.

So on top of any other causes I suggest you check your pump gauge. Pumping up with very cold air then leaving in the sun can cause quite a large pressure change, but I doubt that's the issue in this case.

I just had this happen to my rear tire. I was confused at first because the tire didn't make it to even half its normal life span before failing.

It turns out I had ridden the bike a short ways during a previous flat tire event a year ago and the wheel rim edges in the bead area had gotten a rough finish on them from making light contact with the asphalt. These rough areas acted on the new tire's surface area at the point of rim contact like sandpaper (or a nail file) little by little until strands of the tire were cut away, weakening the casing and causing the tire to fail.

I cleaned up the wheel rim edges to be smooth again and am back in business (with a new tire).

There are three variants how this type of tire failure may happen, two of which have already been described in other answers:

Not the answer you're looking for? Browse other questions tagged tire rims damage or ask your own question.

5
What could cause a tyre to deform in this way?
4
What's the cause of this tyre cut?
3
Can a tire that blew off a rim be safely used on another rim, and under what criteria?
6
Is it normal that the tyre fits effortless the rim?
1
Determine width of rim to match tyre
8
How to best quick fix worn out tyre
0
Bike tyre damage from riding on a flat?
6
Blowout on rear rim
7
Cracked rim around the spoke