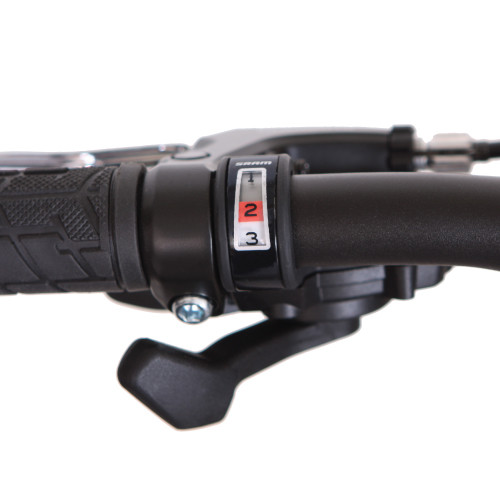 I've tried searching for tutorials on overhauling the shifter in the hopes that these would include the gear indicator but all of the ones I've found seem to deal only with the actual shifter part of the array and not the indicator.

Does anyone know if it is possible to fix the gear indicator? Can you point me towards (or give me a run through) of how to go about fixing it if it's possible to do so?

Other than showing the wrong gear everything else about the shifter works fine.

I don't know if you're still having this problem, but this could be useful for others, so I'll go ahead and answer it.

To be honest I wouldn't bother trying to fix a gear indicator, especially a front one. It's not difficult to remember which chainring you're in and opening up the shifter is definitely going to invite problems for inexperienced mechanics.

What Chris said is probably wrong: the gear indicator will not be affected by cable stretch.

The above notwithstanding, this is a very easy problem to remedy.

1) Shift the chain to the lowest chainring (least cable tension).

1.5) Slide the shifter off of the bar if possible. (This step is not strictly neccesary, but I find it makes things easier.)

2) There should be a number of small allen key heads around the top of the shifter. Undo these and carefully remove the top cover of the shifter. Take a picture of the internals in case anything falls out.

3) The top cover is composed of the cover and the bar clamp (which contains the gear indicator). All of the working parts are contained in the lower part of the shifter. In the middle of all of these you will see a cog which is raised up and doesn't appear to mesh with anything. This is what drives the indicator. On the underside of the top cover you will see a toothed strip of plastic: this is the indicator. Slide it with your finger to '1' (which is where you should have shifted to at the start).

4) Put the top cover back on and put the shifter back on the bar.

Your derailleur cable is probably stretched. It happens normally on newer bikes. Take it to your local bike shop and it'll just take them a minute to fix it. They'll probably even do it for free to get your future business.

This seems like an example of 'if it's broke, don't fix it'... I understand how it might be bothersome or annoying, but modern shifters such as these are relatively complex and can be easily 'messed-up'.

That said, the best solution I could find is the manufacturer's maintenance manuals, which is somewhat lacking. Unfortunately I don't think there are many people who've worked on this specific shifter that can answer your question.

Crack open the shifter. There are four screws holding it together.

Be careful to not displace the springs. If you do move the main one, it is meant to be attached over the cable router and within a small hole in the white plastic near the centre.

As for correcting your perceived problem. In general there is a white strip with sprockets. Move the white strip as you see fit. You can test the location as you go along to see where it is at.

All that being said, I agree with previous posters, if it ain't really broke don't fix it. I wouldn't open the shifter if I didn't really have to.

I agree with Chris Leon, if the shifting mechanism is functioning properly, this is just a cable tension issue. You can adjust the derailleur cable yourself or if it's a new bike the shop will generally do free adjustment at 30 days. I have often overtightened my front derailleur cable and had to back it off. It's actually a pretty good project to work on if you're interested in servicing the bike yourself. You can do it!

Not the answer you're looking for? Browse other questions tagged gears shifter sram or ask your own question.

2
Shimano Nexus Inter-3 internal gear hub stuck in second gear?
1
How do I adjust my 7-speed Shimano SIS indexed shifter not to miss out one of the cogs?
3
Can't shift front gear, despite loosening, tightening, etc. What could be wrong?
3
Front gear issues with middle ring (not always making it over)
1
Overhauling 1998 Campagnolo Chorus Ergolevers
2
Shimano front derailleur - tensioning, can't move shifter
2
Oil leaking from right gear shifter?
0
Front derailleur not shifting up
1
105 R7000 rear shifter malfunction
4
Can't get lowest gear and derailleur shifts on its own